How to Repair Engine Overheating Problems

There are several over heating symptoms that will let you know if the engine is having a problem such as the temperature warning light coming on and noticing the temperature gauge is in the red or close to it. This condition may also be accompanied by a burning coolant smell or reduced engine power. In any case if you think your car's engine is overheating you should safety pull to the side of the road and shut the engine off to avoid internal engine damage.

The cooling system is used to maintain operational temperatures which have a number of components that can fail or leak coolant due to the constant heat and vibration of the engine. When internal temperatures go beyond their designed capabilities internal damage can occur such as a cracked cylinder head or engine block. One of the most common major failures is a blown head gasket which is used to seal the cylinder head to the engine block and allow coolant to enter either the combustion chamber or the engine oiling system. Further damage can include seized pitons and collapsed piston rings, both will cause low compression and can contribute to the engine not starting after an overheating event.

Always use caution when checking out an engine overheating problem because the cooling system has up to 18 pounds of pressure and is filled with hot coolant which can cause burns. Always allow the engine to cool before testing or inspection.

The cooling system must maintain pressure and a proper coolant level or the engine will overheat. Wait until the engine as cooled off and locate and slowly remove the coolant reservoir or radiator cap and check the coolant level. A small amount of pressure should be released which is normal if the radiator cap is good. Over time the coolant level can be a little low which is normal. If the system is continuously low or almost completely out the cooling system or engine has coolant leak which needs to be fixed to keep the engine from overheating. If the system is absent of pressure (you can tell this by squeezing the upper radiator hose and feel pressure) and the system seems to be full of coolant then the radiator or coolant reservoir cap needs to be replaced. Some car designs hold pressure in their coolant reservoir. In these cases the cap will unscrew from the container. 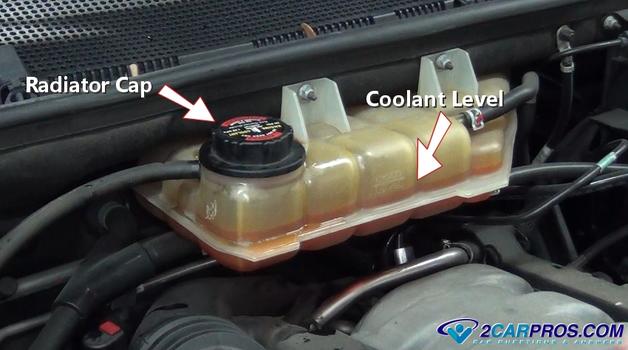 Cooling fans can be either mechanical which are belt driven by the engine, or electric mounted on the radiator. Cooling fans are located directly behind the radiator and are used to move air through the radiator core which helps remove heat from the coolant at low speeds. If this fan stops operating the engine will overheat or run hot. To check an electric motor cooling fan, remove the key from the ignition switch and away from the car. Then reach in and spin the fan blade by hand, it should "freewheel" and spin easily. If it sounds rough or is difficult to turn it has gone bad and needs replacement. There is an easy way to check the electrical portion of the cooling fan system if the car has air conditioning. Start the engine and turn the air conditioner to the coldest setting. Within one minute of the car air conditioner operating the cooling fan(s) should activate. If the fan does not come on first check the fuse and then the relay. If both of these items check out then the cooling fan motor has most likely burned out and needs replacement. 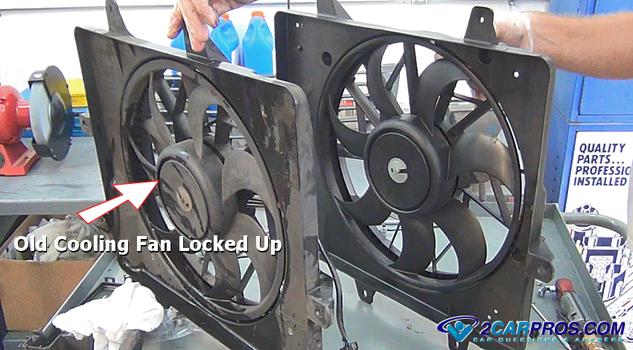 If your car is not designed with an electric fan it will have a thermo fan clutch which is attached to the water pump and driven by the engine. This device engages and disengages the fan blade via a temperature sensor at the center of the clutch. When a fan clutch goes bad it fails to "lock up" which diminishes the fan blade performance causing the engine to overheat by allowing the blade to freewheel and not pull air through the radiator. When the engine is hot this clutch should engage which is followed by a roaring sound as the fan starts to work. If the engine is hot and you can see the blade freewheeling while the engine is running the clutch fan has gone bad and needs replacement. 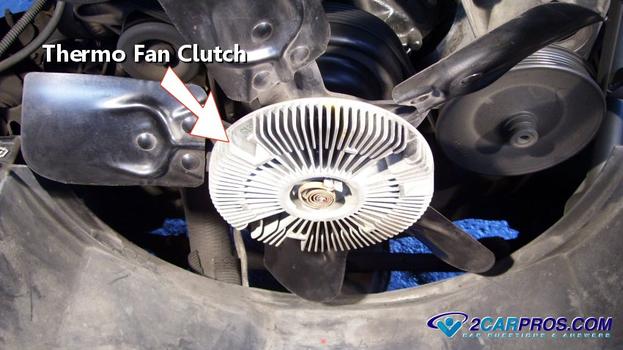 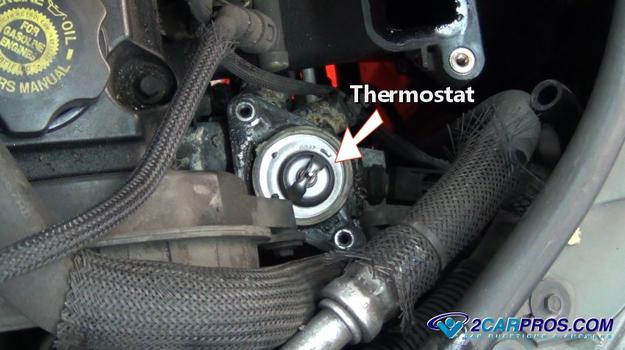 The radiator is responsible for dropping the temperature of the engine coolant and can fail in a three different ways the first is external blockage. Because your car hugs the road it is constantly being bombarded with debris such as dirt, hair, leaves, trash and bugs to name a few. Because of this cooling fins can become plugged stopping air flow through the radiator core causing the engine to overheat. This condition can be hard to detect because the air conditioner condenser sits in front of the radiator in some cases. Use a flashlight to help check for blockage and then use a garden hose to pressure wash the radiator from the backside (facing forward) to help clean and unplug the radiator. 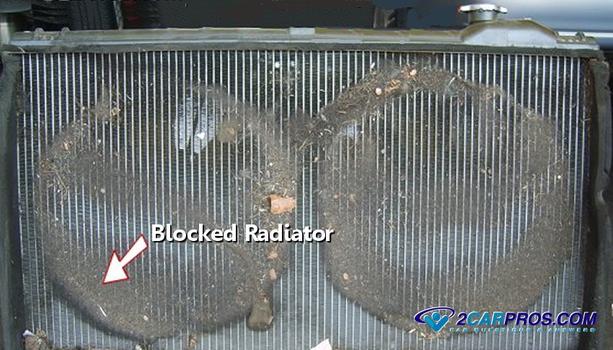 The second way a radiator can fail is to become plugged internally. To check for this condition, remove the radiator cap when the engine is cold look inside using a flashlight. You may need to drain some of the coolant out to see the ends of the radiator core tubes. In the example below the tubes appear clear with no corrosion around the end which is what you want. When a radiator plugs internally these tubes become clogged due to lack of maintenance (radiator flush) calcium will then stop the coolant flow which inhibits the radiator's cooling ability. This condition generally occurs gradually over time and will be more noticeable when climbing a grade or in warmer weather. The third way a radiator can fail is to leak. This will cause the system to lose coolant and cause overheating. In either case the radiator must be replaced. 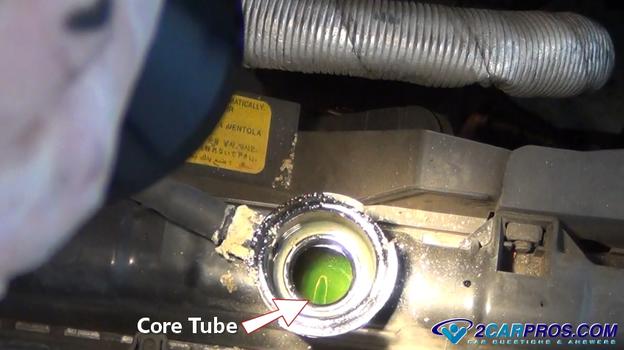 The water or coolant pump is a mechanical pump which is responsible for circulating coolant throughout the radiator and into the engine which is driven by the engine serpentine, timing belt or timing chain. On most hybrid engines this pump is powered by an electric motor. When a water pump fails it can do so in one of two ways. First, it can cause a leak which is what happens when its shaft seal fails or when the shaft bearings fail destroying the seal. This can sometimes be accompanied by squeaking, squealing, grinding or a rattling sound. In some instances the impeller of the pump will become dislodged stopping the pumping action. In either case the water is pump bad and replacement is required. 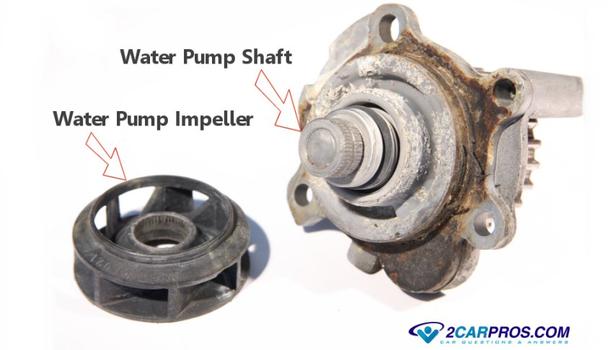 A head gasket is used to seal the combustion process within the engine block and cylinder head. This gasket is prone to failure due to natural engine block and cylinder head expansion and contraction as the engine heats up and then cools down. Corrosion due to lack of cooling system maintenance can also play a factor in the gasket's failure. If the block is cast iron and the cylinder head is made of aluminum a process called electrolysis can take place caused by dissimilar metals. This can cause coolant to enter the engine's oiling system and exhaust gasses to be forced into the cooling system which displaces the coolant from the system. This problem is becoming more popular as engine components such as engine blocks and cylinders heads become more lightweight. Fortunately to test for a blown head gasket is a simple process. When this gasket fails it can also cause a rough running engine at start up.

Our certified technicians are ready to answer engine overheating questions for free. We hope you saved money and learned from this guide. We are creating a full set of car repair guides. Please subscribe to our 2CarPros YouTube channel and check back often for new videos which are uploaded regularly.