AMBROSE2252
Where is the fuel pump relay located and the fuses?
Do you
have the same problem?
Yes
No

The fuel pump relay is Number 303 in the main PCD under the hood. Here is a guide and some fuse box diagrams (below) to help you get the problem fixed.

Please let us know what happens so it will help others.

HOOTGIBSON
I had about 1/4 tank of gas driving I had no problems before and it just died, it would then start get up to 1K rpm and die. Changed fuel filter along the road, I got dirty gas out of the tank side, it will start but only run a little longer than before. I tried to remove the filter and pump gas into a gas can but can not get any fuel to pump out. Is there another filter in or on the tank that could be plugged. I had bought gas at a major truck stop on I-70 outside of Kansas City, Mo, so there should not have ben a old gas problem
Was this
answer
helpful?
Yes
No

RASMATAZ
Try this find the inertia fuel cutoff switch behind the right kick panel try resetting it and turn key on do you hear the fuel pump If not remove switch and jumper the electrical connector, try key again Le tme know- 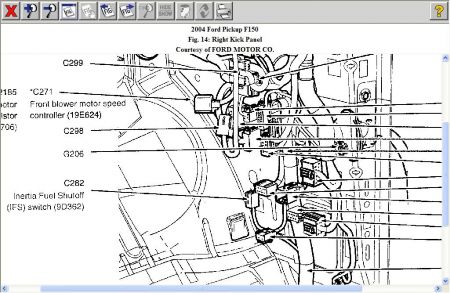 KASEKENNY
If you had visibly dirty fuel in the tank then I suspect the pump has failed. They are not able to handle much contamination so we need to start with checking the pressure. Here is a guide that will help with this.

Also, if you had dirty fuel then you may just have a fuel quality issue which means we need to drop the tank and clean it out and put fresh fuel in it.

If you have to replace the pump, here is a guide that will help with this.

Below you will find the process from the manual on how to replace this.

Please let us know if you have other questions. Thanks
Images (Click to enlarge)

AMBROSE2252
Where is the fuel pump relay?
SPONSORED LINKS
Was this
answer
helpful?
Yes
No
-1

BLUELIGHTNIN6
Your vehicle's fuel pump relay is located in the central junction box (relay 303 ) pictured below. 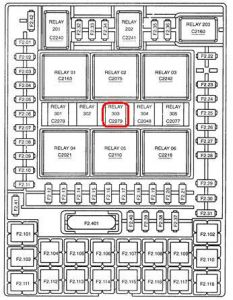 The central junction box is located behind the right side kick panel.

Thanks for using 2CarPros.com!
Was this
answer
helpful?
Yes
No
+11

LIMIT
I have a 2001 f150 supercrew and it recently stopped on me, so I check the underhood fuses and see that the fuel pump fuse blew out, I changed it and did it again right away. So next I changed the fuel pump n fuel filter and it started up right away but a few weeks later it happened again so I changed the fuse n blew right away. Now I cant even drive it cause as soon as I go to turn the truck on the fuse keeps blowing out. Can anyone with this similar problem help me out here. Thanks.
Was this
answer
helpful?
Yes
No

MIKE H R
The first thing I would look for is if there is a wire that is grounding out. Start from the fuel pump in the fuel tank and trace the wire going from the back to the front. sometimes it will be hard to get to but if there is a wire that is ground out it might only do it at times if there is a vibration or the wire moves. you say that after you changed the pump and filter it ran ok for a couple of weeks before blowing the fuse , then I would start looking around that area. Also replace the fuel pump relay they can cause a short as well.

Here is its location I have giving you all the relay and fuse locations for your 2001 Ford truck.

NUKESDADDY16
I am only getting 6.89 volts to the fuel pump after changing the pump itself all the fuses the fuel pump relay as well as ECM relay and the ignition module. I have also had the anti theft checked to ensure it is not the problem and it was not. I put a brand new battery in and still crank with no start. Where am I losing voltage and why am I not getting power to my pump? Help please God bless
Was this
answer
helpful?
Yes
No

CARADIODOC
There is a number of things we have to consider before starting the diagnosis. First, if you were measuring that 6 volts at the fuel pump's connector with it unplugged, that may be confusing the real cause of the problem. This would be similar to standing on a garden hose and blocking ninety nine percent of it. You would still see full pressure at the nozzle, as long as it was closed. No water is flowing, so no pressure is dropped across your foot. Voltage is electrical pressure. With the connector unplugged, no current is flowing, so no electrical pressure, (voltage), is dropped across some undesirable resistance in the circuit.

The ignition switch does not need to be on for this. The jumper will energize the circuit, and the fuel pump should be running. If it is, this entire part of the circuit is okay. If it is not running, now is the time to work your way through the circuit with the test light.
Images (Click to enlarge)

REVLIT1
It blew a fuel pump relay fuse. What may have caused it? And if it is a broken wire in the line how do I track it down what is my least expensive alternative or a bad relay where is it?
Was this
answer
helpful?
Yes
No

BLUELIGHTNIN6
Just replace the fuse and relay. If it blows again then that means there is a problem on that circuit, most likely being a faulty fuel pump. Here is the relay location. Check out the diagrams (Below). Please let us know what happens.
Images (Click to enlarge)

NDMARTI
My truck just died one day and will not start. If you spay starting fluid it will start. The pump does not kick on with the key so I took it out and tested it directly to a battery it runs fine. So I continued to look for electrical issues. The cut off switch on the passenger side is not tripped all fuses are fine I just am getting no power to the plug under the truck. It is a 4.2 v-6.
Was this
answer
helpful?
Yes
No

BLACKOP555
Are you getting power to the relay terminals 86 and 85 when key is turned on ? what is yoru readings at terminals 30 and 87 and 30 and 87a? do you have voltage going to the shut off switch?

This guide should help with the fuel pump relay below.

NDMARTI
Have not check the terminalls will try that. I dont have power at the shut off switch. The way I tested it was 1. Ran a jumper on the switch with no luck 2. Used a testing light and tried it in all 3 wires with no power?
Was this
answer
helpful?
Yes
No
-1

FREDSIMON
Dual tanks - rear pump works - front pump sometimes - in power distribution box, which relay works front tank? Thanks for the quick reply about the #2 relay - does this mean that there is only one relay even with 2 tanks? It is the front tank that I'm interested in.
Was this
answer
helpful?
Yes
No 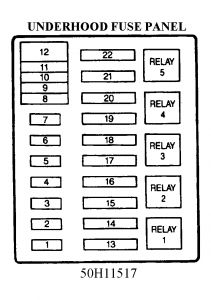 When dual tanks are used, each tank is equipped with a low pressure pump. Such a system has a total of 3 pumps: 2 low pressure and one high pressure.
High Pressure Fuel Pump
The high pressure fuel pump is positioned inside fuel tank. A reservoir is built onto pump and sender assembly.
In a 2-tank system, sender assembly handles switching of high pressure fuel through internal valves. Should one tank overfill during use (return line returns fuel to wrong tank), pump and sender unit in overfilling tank need replacement.
The high pressure fuel pump is capable of pumping over 33 gallons (125L) of fuel per hour at a working pressure of 39.2 psi (2.75 kg/cm2 ). This pump also has internal pressure relief and discharge check valves.
Mechanical Selector Valve
A driver-operated selector switch controls selector valve for switching fuel supply from one tank to another. This valve switches fuel supply and return lines from one tank to another in response to fuel pressure from in-tank pumps acting on its actuating diaphragm.
The diaphragm switches tank connection when less than 2 psi of fuel pressure is acting on upper side of front tank and lower side of rear tank. Valve function depends upon proper operation of in-tank low pressure pumps. In all dual-tank vehicles, excess fuel not used by engine is returned to same tank from which it was pumped.*****
Was this
answer
helpful?
Yes
No
+2

RLM18
The truck started running rough and now is hard to start. Checked out plugs and wires. Noticed the fuel pump does not shut off when turning the key on. Tried swapping around relays but I do not which is which. I may have mixed them up. There are 3. Two are the same. I do not have a manual. Which relay goes where? What else could cause the fuel pump to not shut off? Thank you.
Was this
answer
helpful?
Yes
No

JDL
Hi, thanks for the donation. Relay number 2, should be for the fuel pump. If you got the relays mixed-up, read on the relays, if the diagams-- amp rating--model numbers are all the same, it won't matter which relay goes for the fuel pump as long as it is functional. If you plugged a faulty relay into a different circuit, it could effect that circuit. 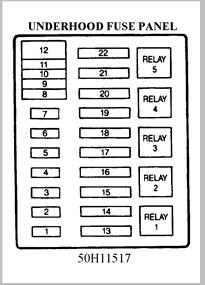 REBELREDNECK
How do I find the fuel pump relay in a f150?
Was this
answer
helpful?
Yes
No

Needing To Find The Location Of The Fuel Pump Relay For A Ford F-150. Any Help Would Be Appreciated. Thanks
Asked by unfangkh ·
6 ANSWERS
2 IMAGES
1987
FORD F-150

My Fuel Pump Is Not Working, Why?

Hey Guys My Question Is With My Truck And The Question Is I Was Driving My Truck When All The Sudden Stopped And A Wrench Lit Up On The Dash...
Asked by dave2984 ·
2 ANSWERS
7 IMAGES
2009
FORD F-150
VIEW MORE