HOGKING
I have a 1991 Chevy K1500 Silverado, 135000 miles
Started the truck one morning and the heater panel was dark, no functions worked. I checked all fuses, then I removed the panel and disconnected the plug. With the key on, I found 12 volts on three different pins on the connector. I ordered a new panel and installed it and the same thing panel is still dark.
What's Next?
SPONSORED LINKS
Do you
have the same problem?
Yes
No

SERVICE WRITER
It sounds like the LPS fuse is out becasue that is what runs the system. Here is a guide and a wiring diagram so you can do some testing.

Check the power and ground to the controller also check the heater fuse while you are at it. Here is the fuse panel and air conditioner wiring diagrams (below)

HOGKING
O man you nailed it the LPS fuse was blown I had no idea I should be checking that fuse you guys are the best and I love 2CarPros!

I will tell a friend!
Was this
answer
helpful?
Yes
No
+12

90SILVERADO
The digital climate control panel on my 1990 Chevy C-1500 Silverado has started to sporadically cut on and off. This started very recently, so it has only happened a couple of times. The first time it happened, the display went blank, and the fan stopped blowing. It stayed off until I got to my destination. Once I got to my destination, I turned the truck off, and when I turned the key back to the "on" position, the display was on, and the fan was running. It worked fine for a couple of days, and then it happened again. It did almost the same thing as the first time, only when the display went blank, there were various icons on the display that would flash, like it was trying to turn back on and couldn't. The fan also stopped this time as well. Another thing that was different is that a few moments after it went out, the display came back on by itself, and the fan began working. I do not know if there is a fuse for the climate control, or perhaps a relay. Where do I start checking this? Or do you think the climate control panel itself is going bad? Thanks!
Was this
answer
helpful?
Yes
No
-1

HMAC300
It sounds like the panel is going bad but this also sounds like auto temp control so have a pro check it as it may be something else.
Was this
answer
helpful?
Yes
No

90SILVERADO
When you say "auto temp control" are you talking about a "Auto" button that some vehicles have that allows the vehicle to control the climate based on the temperature setting? If so, my control panel does not have this function.

Are you aware of any external fuses or relays that could be the problem?
SPONSORED LINKS
Was this
answer
helpful?
Yes
No

HMAC300
I looked up the harness for this and there are a few blower relays which I don't think are the problem. Because you say the panel doesn't light up kind makes me think the control is bad i'll send the harness diagram it cold be the relay but I kind of doubt it being electronic it's probably something is bad in the unit itself or the wires leading to it may be melted and not making contact due to age. See pics for schematic.
Images (Click to enlarge)

CYNDA R
Panel control went off the next time the truck was started, it worked but when I pushed the fan button to increase, it went black again. We checked the fuse and it looks okay. There is still heat coming out below. We had another control panel and put it in, but it doesn't work either. Any suggestions what to try next?
Was this
answer
helpful?
Yes
No

HEYMAN1104
If you raise the hood and look towards the back of the engine compartment, high up, near the firewall, there should be a fairly large bundle of wires. This harness has the power for that control unit. Start with simply jiggling it around a little bit while the key is turned on (engine not running) and the heat/AC is turned on. Have someone observe it to see if the power flickers on and off. If so, then you have a loose wire in that harness, which is somewhat common on older trucks. I'll get you a wiring diagram later on if necessary and we'll go from there. Go ahead and check like I said and report back here. I'll be online again later this evening. Good luck!
Was this
answer
helpful?
Yes
No
+1

CYNDA R
We did try what you suggested but it did not work. Do you have any other suggestions?
Was this
answer
helpful?
Yes
No

CYNDA R
The suggestion was good, but it did not show any signs of working, so it must not be in the wiring. Could we have 2 control panel that are both bad? Is there a way to test the control panels?
Was this
answer
helpful?
Yes
No
-1

Describe everything you've done in detail. This way, as a new question, all of the experts on here will be able to easily see the new thread and reply to it. They may have pertinent experience here.
Was this
answer
helpful?
Yes
No
+1

CYNDA R
We checked all of the fuses and they look okay. We opened the hood and jiggled all of the wires while the key was on (not the engine) so we could see if it was in the wires by observing inside to see if the power to the control box flickered on and off at anytime. No luck. We cannot locate where our LPS fuse is located. Here is a picture of out fuse box.
Image (Click to enlarge)

WISE MAN
So this is what I found on my 1990 GMC. I have only found this 1 time on the internet. Remove glove box. Left of ecu. There is a 3 wire plug. On mine red green, black with a white tracer. The red wire was burnt and making poor contact and the plug was burnt. This also controls the radio circuit. If you move the wire harness under the dash you will see the dash control flicker or stay on. Any how repair the red wire and your issues should go away like mine did. I did not need a need dash control.
Images (Click to enlarge)

Was this
answer
helpful?
Yes
No
+13

KEN
Excellent addition to this thread! Please feel free to help out whenever you are on the site :)
Was this
answer
helpful?
Yes
No
+1

CHRIS DENNIS
Just posting here to offer a suggestion. Mine went black after a long trip back from the beach. Just totally died without warning. Checked all the fuses, they were good, checked the red wire for constant battery power, checked the brown wire for switched 12 volts. Had both. Noticed on the back of HVAC unit where the plug plugs into, there is copper traces on a PCB. I am into arcade games and they have similar pins. These get dirty or corroded pretty easy and cause intermittent issues. I took a flat eraser and rubbed over the contacts on the back of the board. This cleans the contacts on the board. Blew the eraser remnants off with air and sprayed a little of Deoxit contact cleaner on the contacts and let it dry. Mine now works great again. Try this before you replace the module!
Was this
answer
helpful?
Yes
No
+1

DANNY L
Thanks for the advice, Hopefully it will help someone. Thanks for using 2CarPros.
Danny-
Was this
answer
helpful?
Yes
No

EAGLE001
I have a 1991 Silverado. After reading this article, I checked for fuse under the hood. I found a fusible link on the right hand side under a plastic cover on the front firewall had corroded and broke at the wire ending at the link. Thank you for this article. Without it I would have never found the problem. I have changed the control module twice to no avail and have been trying to figure out the problem for over a year now. Taking the fusible link out and splicing in a piece of wire has fixed the problem.
Was this
answer
helpful?
Yes
No
+1

DANNY L
Hello, I'm Danny
Having a fusible link is there for a reason. When circuit is overloaded that link is designed to break to save the entire system from burning out. My suggestion is to get rid of your normal wire fix and replace with a fusible link once again. Hope this helps and thanks for using 2CarPros.

TEXASRUSH
WISEMAN. I want to thank you for posting your note about the RED wire. My 1990 was doing the same thing as yours and looked at that RED wire and it was corroded. I separated the wires, cleaned them with some 300 grit sand paper and put a little bit of PENETROX grease and it's working like new again. Again, thank you so much, your posting saved me hours of troubleshooting and/or hundreds of dollars for a mechanic to find it. Thomas-
Image (Click to enlarge)

A/c And Heat Stays On The Windshield. Digital Controls Shows Changing When I Move To Floor Or To Front Controls.
Asked by Ronald P Murray ·
1 ANSWER
1 IMAGE
2003
CHEVROLET SILVERADO

Air Seems To Come Out The Defrost Vents Fine But Won't Switch To Dash Vents. I Can Here The Actuator Working. Is There A Chance Something...
Asked by Joe Glazier ·
1 ANSWER
1999
CHEVROLET SILVERADO

1995 Chevy Ck 2500 Pickup = 195k Miles The Heater/ac Fan Only Works In The High Position Of The Switch - Is The Switch Bad Or Is The Fan...
Asked by esylvia ·
1 ANSWER
CHEVROLET SILVERADO

Hello My Name Is Justin From Lethbridge Alberta, I Have A 1982 Chevy Silverado. A Few Years Ago We Started A Lot Of Engine Work And...
Asked by ilovemychevytruck42 ·
3 ANSWERS
CHEVROLET SILVERADO
VIEW MORE 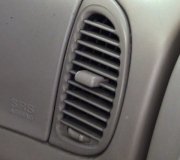 No Air Coming From Vents