How to change fuel pump

RKUHANECK2002
I need help changing my fuel pump
Do you
have the same problem?
Yes
No

KLSHIEL
An in tank fuel pump will require alot of help. First if your from up north and they use salt on the roads in the winter you'll want somebody there that can replace brake lines if you crack one or two. You may also crack metal fuel lines. Empty the tank as much as you can. With the truck jacked up you loosen the straps holding the tank up. Then undo all electrical and fuel connections. Drop the tank, it may take two people. With the tank out you turn the ring holding the sending unit in the top of the tank the pump is on the sending unit.

Here are the instructions on how to change out the fuel pump in the diagrams below. Check out the diagrams (Below). Please let us know if you need anything else to get the problem fixed.
Images (Click to enlarge)

TIMA44
I have dropped my tank and pulled out my fuel pump.The problem is when I call around for a replacement part. They want to know if my heat shield is on side or raps around front. Mine does go down the side of tank but also runs around to half of the front of tank. So witch one do I say I need? 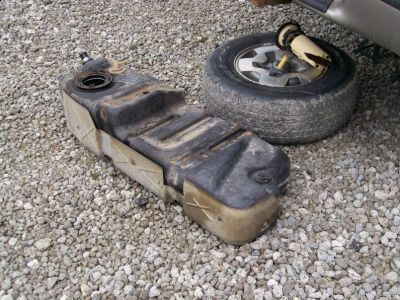 BLAZER96
I have a 2002 Chevy Blazer. I replaced the fuel pump and when I started the vehicle afterwords I noticed that the fuel gadge was pointing down. I hit the top of the dash above the fuel gadge and it rotated around to point up where it should be. Ever since then the gadge is reading wrong. When it reads 1/2 tank it only takes 4 gallons to fill it up but it is a 19 gallon tank. Is this the gadge going bad or is it the sending unit on the pump?
Image (Click to enlarge)

2CEXPT
Could be the gauge itself out of calibration or loose connection to it if not check the fuel sending unit and wiring
SPONSORED LINKS
Was this
answer
helpful?
Yes
No

WENDELL12337
I axidently put diesel in my 2002 2 for Chevy blazer and I cleaned everything out and replaced the fuel pump but now it will try and start but the fuel isn't going through the lines is there anything that I can do?
Was this
answer
helpful?
Yes
No

CADIEMAN
Find the valve on top of the engine the fuel rail. No one may use for checking the fuel pressure. Turn the key on and poke a screwdriver in the valve. If it shoots out you have fuel pressure. If it doesn't replace the fuel filter and try again. If nothing comes out check the fuel pump fuse.
Was this
answer
helpful?
Yes
No

BIKECOP40
I bought a 2002 Blazer 2wd ah it for 1 week and had the fuel pump replaced with a new fuel pump at the dealership and now noticed that the "FUEL GAGE" needle is jumping around and giving inaccurate readings. The question is, is the sending unit and the pump all in one
Was this
answer
helpful?
Yes
No

ASEMASTER6371
Yes, return to them to have this corrected.

BIKECOP40
Thank you Roy.I will let you know what the outcome is in a reply note
Was this
answer
helpful?
Yes
No

ASEMASTER6371
Good luck
Was this
answer
helpful?
Yes
No

How do I change the fuel pump for this vehicle is hard how much will a fuel pump run me?
SPONSORED LINKS
Was this
answer
helpful?
Yes
No

MOBILEOILANDMORE
They are anywhere from $280-$350. You have to remove the gas if any remove the tank and pump. Clean tank put in new pump, replace tank, be sure that all the hoses are connected properly and tight so that they dont leak. Put some of the gas back in start the vehicle and check for leaks. If none put the rest of the gas in and drive.
Was this
answer
helpful?
Yes
No

JB ADAMS
It has fire and fuel, replaced fuel pump, fuel filter, had ignition module checked. Started spitting and sputtering about three weeks ago but not on a continous bases. Blamed on bad gas. Parked it last night and now it will not crank at all.
Was this
answer
helpful?
Yes
No

Get a helper disconnect a sparkplug wire or 2 and ground it to the engine atleast 3/16 away from ground-have helper crank engine over-do you have a snapping blue spark? If so-you have a fuel related problem, Do you hear the fuel pump come On when you turn key on? If not check fuel pump fuse and fuel pump relay if okay-check the fuel pressure to rule out the fuel filter/fuel pump/pressure regulator and listen to the injector/s are they pulsing or hook up a noid light. No snapping blue spark continue to troubleshoot the ignition system-power input to the coil/coil packs,coil's resistances,cap and rotor,distributor pick-up coil, ignition control module, cam and crank sensors and computer Note: If it doesn't apply disregard it and keep testing
Was this
answer
helpful?
Yes
No

TQUARLES
I was wondering what is the estimated cost on replacing a fuel pump on my 2001 Chevy Blazer 2 door truck. A local garage I frequent quoted a price of approximatly $1000.00. Even not knowing much about cars, this seems very high.

Also, is this something that a "weekend mechanic" could do and still be safe for me to drive?
Was this
answer
helpful?
Yes
No

MOON69
I am having the same troubles with my blazer taking many times to start up. And once it is running seems to run fine till I leave it sit again. I have replaced the plugs and wires, fuel pump, sensor on top of the engine, and the batterie. Any more suggestions!
Was this
answer
helpful?
Yes
No

HMAC300
Put a scanner on it and see if there are any codes. If there aren't then see what your fuel pressure is the wiresgoing to the fuel pump are very fne an dalot of times when you replace the pump it breaks the wires so it doesn't work all the time.
Was this
answer
helpful?
Yes
No

Replaced fuel pump may 18th, overnight trip 2 HRS from home and it ran fine the whole way there. About 4 hrs after getn to the hotel we went to go eat and it wouldnt start. It would crank but not turn over and it was like the fuel pump had went out on it all over again. And we listened to see if the fuel pump was kickin on when the key was turned over but couldnt hear ne thing. We made arrangements to be towed home the next morning and when my husband went out to smoke he tried starting it and it fired right up. No prob! He left it running as we pakd QUICKLY and we drove it all the way home non stop with no probs at all! When we bought it a yr n a half ago the guy said the engine light being on was due to an O2 sensor and my husband pulled the codes and just as the guy said it threw the code for an O2 sensor.

My husband could clear it and the light would stay off for a few days b4 comin on again. He pulled codes at the hotel that night it wouldnt start and it showed the usual one and also showed a new code for the heated air flow sensor or something like that. Ne ways he cleared the codes and the light came right back on which it had never did before. When it started the nxt morning though the engine light had gone off and never did come back on the entire trip back home. After we were home it startd just fine a few times then it suddenly wouldnt start again. It once again acted like the fuel pump was bad and he couldnt hear the pump kick on. He dropped the gas tank and took the pump out, checked to make sure it was working and it was so he put it back in BUT he hooked it up and put the tank bak just enough to keep it in place but not tighten things down.

It started right up when he was done, so he left it like that a day and a half and finished tightening things in place the rest of the way. Then it started a few times no prob and today it stranded him at the store and refused to start again. We can hear the fuel system working next to the fire wall, but we hear nothing coming from the fuel pump again when the key is turned over. Each time it dont start, it will crank as if everything is normal but will not turn over/actually start. Please help us figure out what the problem could be because we cant afford to take it to a shop or even have a shop run a diagnostic on it at this point.

Considering my husband is stumped by it and usually he is realllly good at fixing our vehicles (I have a blazer as well thats a 95) im concerned that the problem could be quite serious but more so costly to the point we wont be able to get it fixed. Thank u so much for ur help and I truely hope you can give me an idea of whats goin on.

Sincerely,
Melissa Stephenson
Was this
answer
helpful?
Yes
No
+1

What Do I Need To Do To Replace The Fuel Pump?
Asked by jpellinen ·
22 ANSWERS
6 IMAGES
1995
CHEVROLET BLAZER

The Blazer Would Not Start And No Fuel Was Being Sent To The Throttle Body. I Replaced The Fuel Pump And The Blazer Starts Fine Now. But The...
Asked by mr30217 ·
2 ANSWERS
1988
CHEVROLET BLAZER

Engine Mechanical Problem 1999 Chevy Blazer 6 Cyl Automatic How Hard Is It To Drop The Gas Tank And Change The Fuel Pump? Is There...
Asked by Beth Aloha ·
2 ANSWERS
1999
CHEVROLET BLAZER

1999 Chevy Blazer How To Replace The Fuel Pump

1999 Chevy Blazer 6 Cyl Four Wheel Drive Automatic I Need To Know How To Safely Replace The Fuel Pump On A 99 Chevy Blazer. How It Is...
Asked by fullcircle314 ·
1 ANSWER
1999
CHEVROLET BLAZER

How to fix an engine not starting (running)