FABIAN CHARLTON
Without the battery, the alternator gives about 13.5 volts. To determine that we disconnected the battery and used a multimeter.

When I turn on the high beams in the car without the battery connected, the car turns off. If I have it connected without load, the voltage is about 13.8 with load and with battery it's 13.4.


So, this is the scenario: I turn on the car using a jumper then disconnect the jumper.

If I wait a minute or however long, if I turn on the high beams, the car shuts off.


Now I was arguing with my dad trying to explain to him that I know that turning on the hi beams will shut it off because I start to see the lights dim on the dashboard when I flick to turn it on.(And when I actually do turn it on, the car shuts off) So in rapid succession I flick the high beams and I un flick it fast enough so that the beams do not fully turn on. But each time I'm seeing the dashboard lights begin to shut down like the car is losing power. To show him that if I let it fully power on, the high beams will shut off the car

My dad kept insisting that the high beams shouldn't turn off the car, so while I'm flicking like four times in a row, (each time the dashboard lights are dimming in response to me flicking the high beams slightly) I gave in, and on the five try I let it fully engage the flick and the high beams came on and the car stayed on. I was so confused.

So, I turned off the beams then proceeded to turn it on, and the car shut off.

And I reproduced it.


So, my question is, why does flicking the hi beams ultimately lead to the car not turning off?
SPONSORED LINKS
Do you
have the same problem?
Yes
No

KENNY K
Sounds like the module is trying to load shed to prevent the shutting off but if the high beams are on, it is too much for it.

Have you checked the battery and alternator?

Starting the engine and disconnecting the battery is not going to give us the info we need.

This system is not designed to run off one or the other. It is meant to run in tandem so we need to test each part first and then we can figure out the cutting off with the high beams if it is still there.

However, the high beams are not going to have any effect on the engine other than the additional load, so I suspect we have an issue in this system we just need to start at the beginning.

Thanks
SPONSORED LINKS
Was this
answer
helpful?
Yes
No

FABIAN CHARLTON
So, here's what happened: I bought an alternator from eBay because it was cheap and from my preliminary testing the ac ripple on the old one seemed to be messing up. Soi got one used. The thing was I took it to advanced auto to have them test it and it came back fail. What I plan on doing is taking the alternator from the old car and test that one. Right now, I may have to return the one I got from eBay.

I also had purchased A new battery prior to this conversation.

But I will test the one in the car and report back. In the meantime, here's the used one.
Image (Click to enlarge)

KENNY K
Okay. Yes. I think you are on it. No matter what we do, we need to start with a battery that passes a load test and an alternator that will pass that bench test.

Until we have that, we are just chasing our tail. Let me know how it turns out. Thanks
Was this
answer
helpful?
Yes
No

FABIAN CHARLTON
I'm trying to get this belt off so I can take off my alternator. But I cannot locate what bolt that everyone is always pointing to.
Was this
answer
helpful?
Yes
No 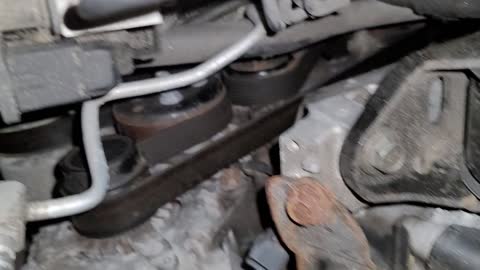 KENNY K
You need to use a 19mm socket wrench to put on this bolt and then you pull it towards you. This will remove the tension from the belt, and you can slip it off the alternator pulley.

Here is a guide that helps with this:

Below is the info from the manual. It shows that there is a leverage point, but I am not seeing that in the video so that means it is the actual bolt that you use. However, if you get a slightly better video or picture of this area, I will point it out if it is not this bolt.
Images (Click to enlarge)

FABIAN CHARLTON
I think that bolt is missing.
Video (Click to enlarge) 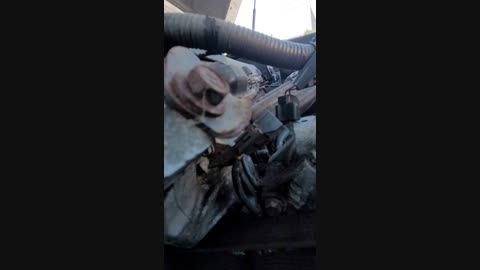 FABIAN CHARLTON
I ended up following this guy https://youtu.be/CcCl8G-zTvo
Was this
answer
helpful?
Yes
No

FABIAN CHARLTON
Oh, now I understand what you meant. I didn't realize you pointed to that thing, caused that's exactly what I used to release the tension. So, is it that the leverage point broke? Or maybe it's not the model to use it?
Was this
answer
helpful?
Yes
No

KENNY K
I think what happens is they reused an illustration from an earlier model year which does have this point, but your vehicle just uses the bolt on the pulley.

Most all vehicles just use that bolt so if that worked, then that is what I would use moving forward.
Was this
answer
helpful?
Yes
No

Shut Off While Driving And Wont Start

I Was Driving Down The Highway When All Of A Sudden I Felt Like I Wasn't Accelarating Anymore. My Oil Light Came On And Two Seconds...
Asked by prytee ·
82 ANSWERS
1995
TOYOTA CAMRY

GUIDE
Stalls While Driving
An engine that stalls while driving and then starts back up again, either immediately or after a short time is different from an engine that just wont start or if the...

The Car Cut Off While I Was Driving

While I Was Driving The Car Cut Off And Now It Will Not Restart. I'm Thinking It May Be The Fuel Pump But Not Sure Any Suggestions
Asked by deeann919 ·
60 ANSWERS
6 IMAGES
1993
TOYOTA CAMRY

The Engine Stopped Running Why?

I Start It Up In The Morning And Drive To Work Just Fine. It Is When I Try To Start It Up Again After I Get Somewhere. I Have To Wait Forty...
Asked by Thetoyman1 ·
32 ANSWERS
21 IMAGES
1995
TOYOTA CAMRY

Why Would A Car Shuts Off For No Reason?

The Issue With The 94 Camry Is That It The Engine Shuts Down While Driving. I Had The Fuel Filter/strainer Replaced, Same Issue. Was Able...
Asked by manb ·
50 ANSWERS
6 IMAGES
1994
TOYOTA CAMRY

My Car Die While I Was Driving It A Few Days Ago. When I Cranck It Up, It Sound Like Out Of Fuel, Buth The Tank Is Half Full. Ever Since...
Asked by Gorkys ·
42 ANSWERS
1 IMAGE
1992
TOYOTA CAMRY
VIEW MORE