SCOTTIEDOO
About a year and a half ago, our car would randomly die in the summer time when we had the AC on. It would normally be five minutes or so after we began our trip. It continued although rarely and quite infrequently throughout the subsequent winter and progressively worsened during the summer. We replaced our battery, because it was shot and it was good for a couple months during the heat of the summer. November came around and it started dying again. When it was dead, the lights, radio, and AC would still stay on, the engine would just shut off, it wouldn't stay on when we put it in neutral while moving and turned it over. We always had to pull over put it in park and re-start, sometimes, we had to wait 2-3 minutes before it would re-start again. We took it to three places they couldn't figure it out, so we had to take it to the expensive dealer who told us that it was the AC that was bad and sucking the power from the engine, they asked for $2000 to fix it, so we unplugged the power to the compressor and took the car to Utah to an old friend who fixed it for $1100. As we drove home to Phoenix I stopped in Kanab for gas, for 5 minutes, and 4 miles down the road, the car died. We pulled off and re-started, it died again 5 minutes later. I unplugged the ipod in the cigarette lighter and turned off the radio, and turned the heater off. This seemed to temporarily fix the problem.

Totally unrelated, but we were about 70 miles out of Phoenix and our exhaust resonator rusted right through and hit the ground as we were driving up a big hill. How much will it cost to get a new exhaust pipe and resonator?

We're pretty much just repurchasing the car with all the repairs we've had to make this year, hopefully it will last another couple years after this.
SPONSORED LINKS
Do you
have the same problem?
Yes
No

JACOBANDNICKOLAS
As far as the exhaust if number 6 in the picture is what you are refering to, the part is around 160.00 + labor. 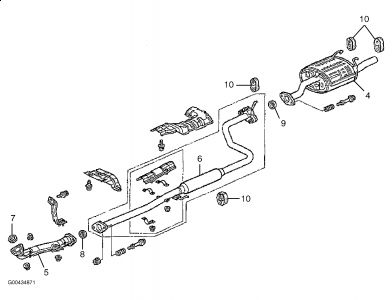 Now for the engine problem. I find it hard to believe that the AC is shuting the engine off. Has the check engine light come on? WHen it stops, is it all at once or does if studder first then die? Is the a loss of power before this happens?

Let me know, and thanks for using 2carpros.com.

SCOTTIEDOO
The check engine light hasn't come on. There is no sputtering. The last time it happened we were going 65 and the engine simply died, we did however maintain power to the radio dash lights and heater. We just coasted in drive but the tachometer read zero. I put it in neutral and tried to start it while coasting at 60 and the tach would shoot up to 3000 as if the car started again but as soon as I turned the key back to "on" the tachometer would drop back to zero. We would stop on the road and wait two or three minutes before it would start up for us again.
Was this
answer
helpful?
Yes
No

JACOBANDNICKOLAS
If the check engine light hasn't come on, I would start by checking fuel pump pressure. Here is a how to for checking it:

You will need a fuel pressure gauge. Most parts stores will lend or rent them. Have you replaced the fuel filter reciently?

Let me know what you find.
Joe
Was this
answer
helpful?
Yes
No

SCOTTIEDOO
The fuel pressure checks out fine. I replaced the fuel filter six months ago along with all new spark plugs distributor cap and wires. What shoul we do next?
Was this
answer
helpful?
Yes
No

JACOBANDNICKOLAS
I was just rereading everything we talked about. Have you ever had the alternator tested to see if it is producing enough voltage to keep things going?
SPONSORED LINKS
Was this
answer
helpful?
Yes
No

SCOTTIEDOO
I did do a very brief test about 3 months ago when I put a new battery in it to make sure that the battery was actually dead and it wasn't the alternator, but It was definitely not extensive.
Was this
answer
helpful?
Yes
No

JACOBANDNICKOLAS
I have done some reading. Based on what I have read, it could be the problem. It doesn't hurt to check. Here is a how to:

SCOTTIEDOO
I checked the voltage across the terminals and got 14.1 V, when we reved the engine and turned on the AC lights, stereo, etc. I got the same 14.1 V. I was unable to get an accurate amperage reading, don't know why, but my multimeter just wasn't having it, so I'll have to borrow someone else's multimeter if we need the amperage from the alternator.
Was this
answer
helpful?
Yes
No

JACOBANDNICKOLAS
That isn't necessary. That sounds good.
Was this
answer
helpful?
Yes
No

What Would Cause White Smoke To Come Out Of My Exhaust

I Recently Had To Replace My Engine When I Replaced It I Changed All Belts, Hoses, Cleaned The Surface Of The Head And The Block, And Put...
Asked by apac408 ·
32 ANSWERS
4 IMAGES
1995
HONDA CIVIC

What Would Cause Excessive Blue Tint Smoke To Come Out...

I Have A 2003 Honda Civic Ex With Auo Transmission With 121000 Miles. It Has Been Making A Very Strange Noise Sounds Like A Belt. No...
Asked by myrrhdemarmion ·
6 ANSWERS
2003
HONDA CIVIC

My Heat Shield That Protects The Catilytic Converter Makes A Metallic Vibration Noise When The Car Shifts, Not To Bad, Only For A Few...
Asked by SallyBug ·
3 ANSWERS
2002
HONDA CIVIC
VIEW MORE