ROBMCKAY
Help I can't figure out how to use the rental spring compressor. Can anyone help
Do you
have the same problem?
Yes
No

First you need to be EXTREMELY careful when working with these springs. You can be severely injured if you are not sure what you are doing. The springs are under a lot of pressure and MUST be compressed BEFORE removing any nuts etc.

If you are not sure then take to a shop and have them do for you.

As for your question the pic below is the tools you should be using...they fasten onto the outer part of the spring opposing each other and are locked on. You put the one end as high as you can and the other as low.....the lock pin helps prevent the spring from sliding out of the clamp. 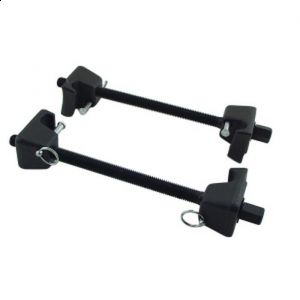 Once installed you turn the bold end to compress a little on one side then the other alternating back and forth EVENLY compressing the spring. Once it is compressed as far as possible there should not be ANY pressure on the upper plate. If there is you dont have it compressed enough.

Once fully compressed THEN you remove the nut and other items, carefully remove spring and carefully place on new strut. install all plates etc and nut to proper torque.

Then you carefully turn the spring tool nuts the opposite way alternating back and forth to expand the spring back into position.

Again, BE CAREFUL AND IF YOU ARE NOT SURE DONT DO IT HAVE A SHOP DO IT FOR YOU. You did the big part you have them removed

ROBMCKAY
Hi, I tried a set of these. They were rented from AutoZone and they are much, much larger then my cars springs were meant to handle. I was however ble to force them on after alot of sweat and they work very poorly. Is there any other kind available?
Was this
answer
helpful?
Yes
No

Well, not that I am aware of unless you check with say, Snap-On. I have used a set like these on many different vehicles hard to put on if you felt like throwing them across the garage well, let's not go that direction anyway they must fit tight and I have even installed compressed but still didnt have them at the highest and lowest point. Frustrating

The spring is at an angle. Theses really aren't, you are compressing a lot in a small area.A lot going on there. Have you ever removed springs other than struts? That's worse. Since they are still on the car, on some you are having to slide the spring tool through the lower control arm then get the highest/lowest point. Not fun.

Again, you might try snap-on but I think this is the what you will find
Was this
answer
helpful?
Yes
No

Not sure if your model is just the Civic or or the EX or DX etc but here is a recall on the seat belt button you might check into. Call the dealer and provide your VIN number and if it applies they should fix it for free.

Do The Rear Struts Have Replaceable Cartridges?
Asked by boboso78250 ·
1 ANSWER
2002
HONDA CIVIC

How Do I Tell If My Car Needs New Struts?
Asked by golson ·
3 ANSWERS
2002
HONDA CIVIC

Put In New Struts Mechanic Is Saying That Alignments...

Hi, I Just Bought Four Brand New Tires For My Car In August, I Have Only Driven About 7,000 Miles Since And My Front Two Tires Are...
Asked by mledre ·
1 ANSWER
7 IMAGES
2002
HONDA CIVIC
VIEW MORE