CHGEVER
Also I cant find the iac motor, I think its dirty because when I start the truck it idles high for a minute or so, I mean like 2 thousand or so. If you have any good advice I would be very thankful. Thanks chuck!
SPONSORED LINKS
Do you
have the same problem?
Yes
No

OBXAUTOMEDIC
This guide should be able to help us fix it.

The IAC should be located within 12 inched of the TPS. Here are a couple pics 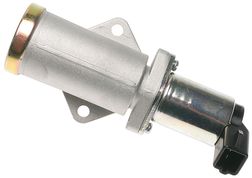 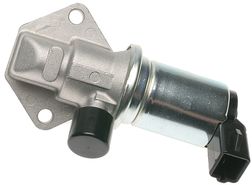 METALHEADJT
Hello, My 1992 F150 5.0 Has started to idle very high and I changed the IAC and didn't make a difference. I get a Code of 33 on my reader says EGR valve fault. I was wondering if it maybe the EGR doing this? I have heard it maybe a bad throttle body gasket as well. Any help you may give me would be greatly appreciated. Thanx JT
Was this
answer
helpful?
Yes
No

BILLYMAC
Hi yes could be the plantum gasket. Or egr valve. I would pull the valve check the pintle for carbon make sure the pintle is opening and closeing then change plantum gasket
Was this
answer
helpful?
Yes
No

JFAMOLARO
I have had the same problem, what was the resolution to your problem. Thanks
Was this
answer
helpful?
Yes
No

GOLF-NUT
The 1991 F150 (V8-5.0L, 2WD, AOD transmission) I gave to my son in October 2005 has idled way too high since I got the transmission rebuilt (just before I gave it to him). The idle speed is around 1,200 RPM's on cold starts. The idle goes up and down repeatedly, and sometimes shuts off, until it finally warms up to a still too high 1,000 to 1,100 in park, with the A/C off, and around 850 in drive, with the A/C on. As you know, it is supposed to idle high on cold starts and then wind down steadily until it gets to the proper warmed up idle speed of 850 or so in park with the A/C off, and 650 in drive with the A/C on (the proper settings to be used when setting the engine timing). Other problems that may or may not be related include backfiring sometimes when power is applied, and always pinging with regular gas, forcing me to use premium gas ever since it was new, even though it was supposed to accept regular.

They transmission folks claim they did nothing that would cause the high idle. They and other mechanics say a vacuum leak might cause the idle problems, but they can't find any such leaks.

The vehicle has 438,000+, but the engine was replaced at 297,000 due to oil seal and gasket leaks. The distributor and injectors are original.

I have cleaned out the throttle body and replaced the Idle Air Control (IAC) valve and the Throttle Position Sensor (TPS). I had experienced the up and down idle speed on cold starts at several times in the past, and changing the IAC stopped that problem. But a new IAC did not help either problem this time (the up and down idling on cold starts or the steadily high idle after the engine is warm).

At various times in the past, we have also changed such things as the PCV, EGR, and catalytic converter. In reading the Haynes repair manual for the 1991 F150, I see references to other sensors that measure oxygen, temperature, and even manifold pressure. Could one of these be the problem? Perhaps the main computer itself is bad? I say this because it has never allowed me to use regular gas without pinging, like it was supposed to.

Any advise to help solve this problem will be much appreciated. And, if you can solve this one, you guys really deserve donations.
SPONSORED LINKS
Was this
answer
helpful?
Yes
No

INDYUKE
From what you describe about the idle, it sounds like you have a bad coolant temp sensor. Often when they go bad, they provide a false reading to the computer and the computer never sees the engine as warming up, so all the cold idle and mixture settings are kept in play. This cold enrichment would also cause the backfiring like you describe.
A bad manifold pressure sensor will cause an extremely high idle. Unplug it while the truck is running, your idle speed should go way up. If nothing changes, then it could be bad.

The pinging is a little harder to diagnose. The knock sensor could be bad, but that is unlikely. Two things that you could double check.

The 5.0 has a penchant for ignition cross-firing between cylinder's #7 and #8. They are next to each other and also fire in sequence. Make sure all spark plug wires, especially #7 and #8 are well separated.

The truck 5.0 references it's PCV tap exclusively on the #8 intake runner. So that cylinder will always run leaner and hotter than all the rest, and it will have a tendency to ping. It will also pull small amounts of oil through the PCV system into the #8 cylinder, lowering the overall octane rating and farther contributing to that pinging tendency. Some guys will go so far as to drill and tap a new hole in the center of the intake so all cylinders pull evenly to solve that problem.

Check that you don't have a partially plugged injector.
Was this
answer
helpful?
Yes
No

GOLF-NUT
Thanks for your prompt response and the several ideas you provided. I will pass on your ideas to my son (and his mechanic) and let you know what comes of it.

Thanks Bob
Was this
answer
helpful?
Yes
No

BLONDEWOLF
I tried the MAP sensor test that was described, and there was no change in vehicle rpm's except that the idle seemed to smooth out. So I unplugged the vacuum line to the map sensor and left it unplugged and my idle increased to appropriate rpm's for a cold idle. Now i'm curious if, besides replacing my map sensor, if I can run the engine with the vacuum line detached until I can afford the new MAP sensor.
Was this
answer
helpful?
Yes
No

INDYUKE
Yes, you could run the truck that way. After all, if the engine runs, it will push the truck down the road. However efficiency will be seriously compromised.
Was this
answer
helpful?
Yes
No

HOTRODZBOY
I have a 1991 ford F-150 v8 5.0L. When I start it up it idle's at about 1300 rpm's and will jump around alot, sometimes the truck just cuts off. I've replaced the EGR vavle and throttle control sensor, but the truck still idle's around 1100, what else could cause the high idling?
Was this
answer
helpful?
Yes
No

2CEXPT
Clean out the idle air control valve and see what happens
Was this
answer
helpful?
Yes
No
-1

PARKES2U
I replaced the IAC motor and continue to have the high idle issue - did you get this corrected
SPONSORED LINKS
Was this
answer
helpful?
Yes
No

my trucks idling is messed up and I cant figure out whats wrong with it. When I first crank it in goes up and down from 500 rpm to about 1500 to 2000 rpm if I let it idle like this for about a minute it will die. If I drive somewhere and pull it in park it revs up to about 3000 rpm. Ive replaced the IAC, fully tunned it up, replaced the intake gasket. I dont know what else to do. Please help!
Was this
answer
helpful?
Yes
No

BLUELIGHTNIN6
Have you checked vacuum system for any vacuum lines that are damaged, loose and leaking?
Was this
answer
helpful?
Yes
No

MARYZMAN
Where would I be able to get a diagram of all my vacuum lines? Ive look but I havent noticed any damaged!
Was this
answer
helpful?
Yes
No

BETHC
My 1991 Ford F150 will idle extremely high sometimes and the check engine light will come on. If it's doing this when you turn the engine off it won't start up again. Somtimes I would disconnect one of the battery terminals and would be able to start it up again later. Otherwise it needs to be jumped.
What is causing the idle to be so high and would it affect the batteryr?
Was this
answer
helpful?
Yes
No

2CEXPT
Clean out the idle air control valve/motor and also look for false air leakage and see what happens
Was this
answer
helpful?
Yes
No

BETHC
Thanks -will try that but any reason why this would cause the truck to not start up again? Also why does disconnecting the battery seem to help?
Was this
answer
helpful?
Yes
No

2CEXPT
Do you have a check engine light?

You've been disconnecting the battery-doing that the computer loses its memory and has to go thru a relearning process.

Next time it w/n start do below to determine if its fuel or spark problem.

Get a carb cleaner and spray into the carb or the throttle body on an EFI. Did it start and die? If not disconnect a sparkplug wire or 2 and ground it to the engine -have helper crank engine over-do you have a snapping blue spark? If so-you have a fuel related problem, check the fuel pressure to rule out the fuel filter/fuel pump/pressure regulator and listen to the injector/s are they pulsing or hook up a noid light. No snapping blue spark continue to troubleshoot the ignition system-power input to the coil/coil packs, distributor pick-up coil, ignition control module, cam and crank sensors- Note: If it doesn't apply disregard it
Was this
answer
helpful?
Yes
No

BETHC
The check engine light goes on and off periodically. The truck was running good for awhile and the light was off. I had the ignition module replaced a couple of weeks ago because the truck died and had to be towed. Was told it was the ignition module. It was up and running and a week later the idle went up and the check engine light came on again. It's not idling like this all the time - just here and there. Also if the truck sits for more than a day the battery seems to drain and it needs to be jumped.
I will try below and see how that works out

Engine Has A High Idle?

I Relpace Thermastat, Radiator, Runs Hot, Then Goes Back To Half Way, Then Runs Hot Again, Thanks
Asked by Paulcats ·
11 ANSWERS
1993
FORD F-150

Idles Rough Once It Starts To Warm Up And Cuts Off...