NEYSMITH
My car stall out while driving. The mechanic said it was the O2 sensors after hooking it up to the diagnostic machine. Would this cause the car to stall out? It stalled out while on the highway one day, which concerns me?
SPONSORED LINKS
Do you
have the same problem?
Yes
No

WRENCHTECH
Yes if the heater sorts to the sensing element they can cause the engine to stall here is a guide that can walk you throught he steps and the sensor location and instructions on how to replace net in the diagrams below.

WRENCHTECH
There is some conflicting info there. Your getting codes for both rich and leans condition so if you are correct about the code numbers, then you likely started with a severe rich condition that eventually clogged the O/2 sensors to the point they can only read lean.
At this point you probably have ruined the O/2 sensors due to driving it too long with a rich condition. Your going to have to start with new O/2 sensors and then look for the original problem. Clear the codes after the sensors are replaced and then see what codes reset after replacing the sensors. Then you'll get an accurate picture of what may be the root cause of the problem.
Was this
answer
helpful?
Yes
No

NEYSMITH
Thank you so much, how long does that usually take to repair?
Was this
answer
helpful?
Yes
No
-1

WRENCHTECH
This is going to be a three hundred dollar expense unless you do it yourself. The sensors can be replaced is less than an hour.
SPONSORED LINKS
Was this
answer
helpful?
Yes
No

MAIDENMAINE
I have a 2005 Ford Expedition. My check engine light has been on for almost a year now. The code it throws is the O2 sensor, bank 2. I have had the sensor replaced 3 times. I've also had the spark plugs and coils replaced. Light is still on. Trucks performance is decreasing. Exhaust recently started smelling bad. Truck will shake at idle and sounds like its going to cut out. My friend (who is an airplane mechanic, but also knows a great deal about cars) said he thinks it's the cat converter. He's never looked at my truck but feels that's what it is. I've brought my truck into two different places, one being a Meineke, and they both said that the "code" says its the O2 sensor and that as far as they could tell, the cat was fine. WELL. CLEARLY SOMETHING IS CAUSING THE O2 SENSOR TO CONTINUE TO FAIL! Any ideas. Please help!
Was this
answer
helpful?
Yes
No
+1

ASEMASTER6371
The issue is the o2 is not bad. It is something else. What are all the codes? It sounds like it is missfiring which may be plugs and coils?

A full year? Never, never let the light be on without getting the code repaired as it will cause other issues like this down the road.

WRENCHTECH
No, not hardly. You're just throwing good sensors away. The code number does not identify a failed part. T merely identifies a specific situation that needs further diagnosis to determine the actual cause. Post the exact code numbers.
Was this
answer
helpful?
Yes
No

BLACKOP555
The oxygen sensors if failing will cause your engine to run rough and give you horrible fuel mileage, and will cause the vehicle to miss.

Too low octane will cause a engine to miss also.
Was this
answer
helpful?
Yes
No
+1

MHPAUTOS
This takes a little effort but it can be done with a volt meter. Typically they measure this with the repair computers in the dealerships and such. For a single wire sensor trace the wire color back into the cars computer. The computer is usually under a seat, passenger side dash or under the console. To make sure you traced the right wire disconnect the o2 sensor and using the connector end (of the wiring harness NOT the o2 sensor)use your meter and "ohm out" the wire ie check connectivity. On the computer side the harness connector will hopefully be the typical molex connectors that you can press your probe into from the outside. (Do not disconnect from the computer it wont start!).

Now that you know which wire into the computer comes from the o2 sensor, reconnect the o2 sensor and warm up your car. You may consider leaving the voltmeter probe in the molex connector before starting if you are concerned about poking around after it is running. In the volts setting (0-2 or 0-5 volts) leave the positive lead in the connector and the negetive lead to ground (usually anything metal connected to the frame). When you first start your car your numbers will be low 0.1-0.3 volts as this is a rich mixture necessary until the car warms up. Once warm expect numbers in the mid to high range. Meaning 0.5 to 0.8 volts. If you bounce the throttle you will see a cyclic response from low to high 0.3 then 0.8 or so as the engine emits its exhaust. Consult your specific auto manual for acceptable ranges.

It is usually between 0 an 1 volt with 0 = rich and 1 equal to lean. Your auto manual should give you outputs for idle, and possibly under load (driving at a constant rpm)

If you have a multi wire sensor the same applies but you have to fish out the "signal" wire coming from the sensor. The other wires are typically for heating the sensor.

Hope this helps. I have done it myself on several cars but I don't know what they all look like and behave like so use this only as one data point.

Hope this helps
Was this
answer
helpful?
Yes
No

JAMIESM2481
Will a bad oxygen sensor cause my 2003 Ford Expedition to not idle? I have to keep constant gas from the petal to keep it running or it will die. Diagnostics sais it was a bad sensor in Bank 2. Which side is Bank 2 on? Thank you

Left as in driver's side?
Was this
answer
helpful?
Yes
No

RASMATAZ
Bank2 Sensor1 is at left exhaust pipe and Bank2 Sensor2 is at the rear of exhaust system.

Also try cleaning out the idle air control valve and see what happens
Was this
answer
helpful?
Yes
No

JDUB37
I need tochange my o2 sensor in my expedition. Where are they or it located at? Is it hard to change, and more importantly, do I need any special tools, like an oxygen sensor sockit? Thank you in advance, jdub.
Was this
answer
helpful?
Yes
No

BMRFIXIT
You have 4 O2 sensors 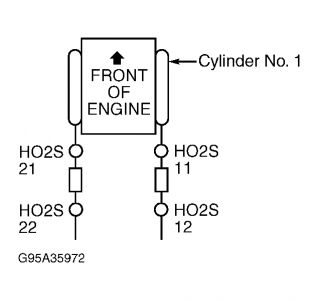 BLASTERUNK93
2000 Ford Expedition XLT 5.4 Liter 173,000
Started to idle rough about a week ago.
Sitting at stop light almost stalled out. Rpms then shot up and the service engine soon light came on.
Pulled these codes at AutoZone
P2272, P2273, P0156, P1131, P1151 All 02 sensor codes.
Will 02 sensors cause such a rough idle? And is it normal that all these codes will happen at once? The first two seem to contradict each other, one stuck rich and one stuck lean.
Was this
answer
helpful?
Yes
No

PROAUTOTECH
Possibly a clogged cat, the pre cat 02 sensor would read rich and the post cat would read lean in this case. And it would run like crap with poor exhaust flow. That's all I got so far.
Was this
answer
helpful?
Yes
No

Where Is The Bank 1 Sensor 1 Location On This Vehicle. I Need To Change The O2 Sensor At This Location?
Asked by dnpainting ·
19 ANSWERS
2 IMAGES
1999
FORD EXPEDITION

Po135 Will Not Go Away After Reinstalling New O2...

I Received Po135 And Replaced Sensor On Bank 1 Sensor 1. After Installing New Sensor And Resetting Code With My Scan Tool. Sensor Has Come...
Asked by roycar71 ·
13 ANSWERS
1 IMAGE
1997
FORD EXPEDITION

What Are The Signs When An Oil Pressure Sensor Goes Bad?
Asked by ken777 ·
1 ANSWER
1 IMAGE
1998
FORD EXPEDITION

2003 Ford Expedition V8 Four Wheel Drive Automatic How To Fix This Is It Expensive? Will It Be Cheaper To Have It Done At Ford Dealer?
Asked by marzree ·
1 ANSWER
2003
FORD EXPEDITION

I Have A 97 Ford Expedition, With A Locked Engine. I Bought A 99 Ford Expedition Engine To Replace It Because I Was Told It Would Easily...
Asked by serenitysoul ·
2 ANSWERS
1997
FORD EXPEDITION
VIEW MORE