Engine coolant over temperature when ignition on

A few days ago, I received an Engine Coolant Over temperature warning on my car (turbo) out of the blue after a twenty minute drive to work in the morning.

That day I checked the expansion tank level, and it was low, so I opened the cap and added about 600 ml of distilled water, and closed the cap.

No trouble for a day, then started intermittently fluctuating temperature randomly while driving, and throwing the over temperature warning.

I limped by for three days with an occasional warning, where I would pull over, and open the expansion tank cap for a couple of minutes. It would bubble furiously for about forty five seconds, then stop. I had recap it and drive on.

Now It will immediately peg the temperature gauge to high (right) and give engine coolant over temperature whenever the ignition is in the "on" position.

I checked the coolant temperature sensor, and there appeared to be coolant leaking by it. I cleaned up the coolant, and removed and inspected the sensor.

The o-ring was degraded and there was some mild patina on the sensor where it contacted coolant.

I cleaned the sensor with scotch brite, cleaned with alcohol and dried thoroughly, and replaced the o-ring. I also picked up a replacement sensor from AutoZone.

With the existing cleaned, or the new temperature sensor, it will still immediately peg the temperature gauge to high (right) and give engine coolant over temperature whenever the ignition is in the "on" position.

If started, the vehicle will only run at idle.

If I disconnect the sensor, and turn the ignition to "on" I get the same behavior, except the temperature gauge will peg high, then peg low, then return to high.

I do not have an ODBII handy, is there some way to re-set the system, or am I looking at possibly some sort of ECM/electrical issue?

Any help is appreciated!
SPONSORED LINKS
Do you
have the same problem?
Yes
No

KEN L
The new sensor needs to be initiated to the PCM so if you have the old sensor try that if you can. We are reviewing a product currently form AllData that will help you with this problem.

In the meantime please read the codes this will help us know for sure. Here is a guide to help you:

GISTBANE
What was the outcome? My 2014 is doing the same thing and the sensor was also changed.
Was this
answer
helpful?
Yes
No

KEN L
I checked out the wiring diagrams for this sensor and they go straight into the PCM which I believe is bad. To be sure use the video link above to scan the CAN. Here are instructions on how to change the PCM out in the diagrams below. Check out the diagrams (below). Please let us know what you find. We are interested to see what it is.
Images (Click to enlarge)

I Am Having A Problem With My Car. One Time It Overheated On Me, I Was Able To Get It Home. The Next Day I Get Into My Car Did Not Even...
Asked by Chuck.rich ·
21 ANSWERS
1 IMAGE
2014
FORD FUSION 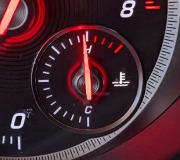 GUIDE
Engine Overheating Warning Light
The engine temperature warning light is conveniently located inside the instrument cluster display panel, it's designed to alert the driver that the car's engine is ...

Battery Light Is Staying On

Had A New Alternator Put In Yesterday And Now The Battery Light Is Staying On. When We Put The Headlights On They Go Bright Then Dim, Plus...
Asked by Damien Parr ·
2 ANSWERS
2003
FORD FUSION

My Fuel Cap Light Has Been On For About 5 Days Now. I Noticed That My Cap Was Not On About That Same Time. Since Then I Have Filled Up And...
Asked by locoluna ·
1 ANSWER
2006
FORD FUSION

Tire Pressure Light Will Not Go Out. All Sensors Have Tested Good. Please Assist. Thanks, Bob
Asked by mailibu1955 ·
3 ANSWERS
1 IMAGE
2013
FORD FUSION

Car Will Start But Once It Heats Up It Cuts Off And...

06 Fusion Made A Sudden Jerk And My Daughter Pulled Off The Road And The Car Cut Off. We Towed The Car Home And The Car Started Up Again...
Asked by missdb1 ·
1 ANSWER
2006
FORD FUSION
VIEW MORE

Is Your Engine Cool Enough to Check? 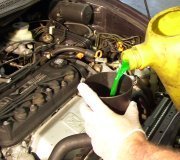