DBRUMMETT
Our 2003 Chevy Tahoe Flex Fuel system doesn't maintain pressure on the fuel line over time and has trouble starting. It rarely starts on first turn of key. We replaced the fuel pump, the fuel filter, the fuel regulator, the throttle body, the crank shaft positioning sensor and still had problems starting the truck. So we decided to check the fuel pressure. We found that after turning the key several times that our fuel pressure was normal and the truck would start but after sitting for an hour or more the pressure would leak down. When we put a gauge on it by the fuel filter the pressure stays consistent over time but when we put the gauge on the fuel rail it goes to zero over time. Is it supposed to do that? If not, what could be causing it? Remember we have already replaced the fuel pump and fuel regulator. The only thing we haven't replaced or checked is the fuel injectors.
SPONSORED LINKS
Do you
have the same problem?
Yes
No

JDL
At the fuel rail, does the pressure drop more than 5 psi in a minute? If so, after seeing everything you replaced, if it isn't an injector leak, I don't know what it is?
Was this
answer
helpful?
Yes
No

DBRUMMETT
Today we tested the pressure at the fuel rail and it is about 40 psi right after starting it and turning it off which we think is within normal limits for a Flex Fuel system. Then after a couple of minutes of turning it off the pressure went to 45 psi without us doing anything. It is holding steady pressure even after a couple of hours. But now has a new issue, when we start it, it starts running rough and dies. So it seems like the issue is intermittent. It is very frustrating because when it starts running rough it gives a code that there is a communication failure with the crankshaft positioning sensor which we have replaced twice. Also, there is a second code that says ATC failure. What is that about? We are beginning to wonder if this is a PCM problem. Any ideas?
SPONSORED LINKS
Was this
answer
helpful?
Yes
No

DBRUMMETT
One day the Tahoe will have trouble starting and maintaining fuel pressure then on a different day it will start right up no problem and maintain pressure but then start idling rough and die. When we finally get it started and it doesn't die and if we hold the gas down and put it in gear we can drive it without any problems. But then it will have the little engine light on the dash. When we check the code it says that error in communication with the crankshaft positioning sensor and a second code that says ATC error. Any ideas?
Was this
answer
helpful?
Yes
No

JDL
What is the engine vin? What were the actual codes? You may need to check if cam and crank sensors are in sync?
Was this
answer
helpful?
Yes
No
+1

DBRUMMETT
The code is: P0336B with our OBDII Scanner.
SPONSORED LINKS
Was this
answer
helpful?
Yes
No
+1

DBRUMMETT
The vin# is: 1GNEK13Z13R308608. How do we check to see if the crank shift positioning sensor & Cam sensor are in sync? Also how do we check the voltage ground & signal?
Was this
answer
helpful?
Yes
No

JDL
You would have to use a scan tool that shows live engine data. The info below is for p0336. 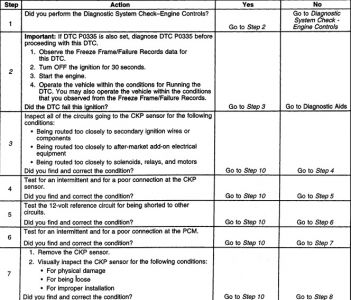 How Much Fuel Pressure Is Need While Run Siting Still How Low Is To Low.
Asked by tahoe , no.1 ·
1 ANSWER
1997
CHEVROLET TAHOE

Hello My Name Buddy And I Need Some Advise From You Im Trying To Replace Fuel Pressure Regulater And I Have A Small Problem I Have A 5.7...
Asked by mrtclem ·
1 ANSWER
1998
CHEVROLET TAHOE

Fuel Not Getting To The Filter Or Fuel Rail

I Am Getting Power To The Fuel Pump And I Can Hear It Turn On When I Cycle The Key, However I Am Not Getting Fuel To The Fuel Filter Or The...
Asked by Baron Mallory ·
6 ANSWERS
2003
CHEVROLET TAHOE
VIEW MORE