MLANDRETH87
I need to know where the ECM Wiring Relay is located so that I can replace it. I have the part
Do you
have the same problem?
Yes
No

There is two ECM relays called PGM fi-1and PGM fi -2. Here is a wiring diagram and the relay box location which is under the dash by the kick panel on the drivers side.

Here is a guide on how to test the relay

Check out the diagrams (Below). Please let us know if you need anything else to get the problem fixed.

JONESTIFFANY2
I need to know where t can find the main relay?
Was this
answer
helpful?
Yes
No

KHLOW2008
It is labelled as PGM-FI ECU main relay if that is what you are looking for.
Image (Click to enlarge)

JONESTIFFANY2
Thanks
Was this
answer
helpful?
Yes
No

Have a nice day.
SPONSORED LINKS
Was this
answer
helpful?
Yes
No

DOC GOINS
Where is the main relay located is it easy to replace
Was this
answer
helpful?
Yes
No
+1

BLUELIGHTNIN6
Behind left side of dash 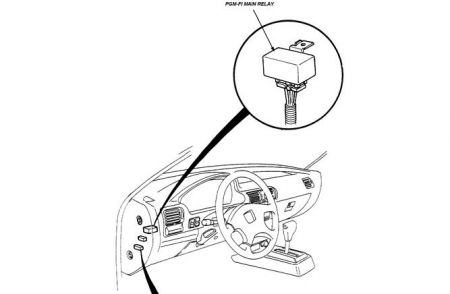 RASMATAZ
Here you go and have a nice day 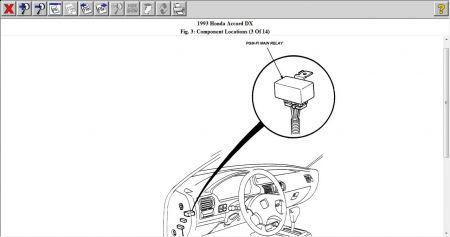 Was this
answer
helpful?
Yes
No
+12

FINALLY26
Hello,
After having the Honda problem where the car won't start and the "D" blinks on the transmission pattern on the dash, I found a great article explaining how the Main Relay is often the cause of this as the resistance changes due to poor/cold solder joints on the baord from the factory, allowing so much juice through it places the car into "limp mode".
I replaced the Relay and the car started great. I drove 1 mile and came to a stop sign. As soon as the car came to a stop (in drive) it started to run very rough. It won't stall but sounds like it is missing. I nursed it back home.
Any idea if something further down could have fried now due to "stronger relay", or any ideas what to check next?
No engine lights or codes showing.

Thanks
Was this
answer
helpful?
Yes
No
+1

There is no such thing as a stronger relay. The work of the relay is to control power supply to the ECU and fuel pump.

We need to understand what is causing the problem and it could be something different and nott related to this.

Did you check the spark plugs, wires and distributor?
Is the Check Engine Light indicating?
Is the D4 light blinking?
Was this
answer
helpful?
Yes
No

Hi there!
I've had a problem with my 1992 Honda Accord EX lately, it's been dying. The car has two symptoms, but I'm wondering if they could be related to the same issue.
The FIRST PROBLEM I'm having is one I've read about quite a bit on the internet. It sounds like it's very common to have an Accord with starting issues. Here is an exact description of my problem, as written by another Accord owner:

"My '92 Accord EX sometimes won't start, either. It seems to be more common on a hot day and/or after a short period of being turned off, before being restarted, but that's not 100%. It can go for days or weeks without this problem, or may do it a couple times in a day. Note that it cranks fine, but never fires. However, the green square around the D4 indicator always starts blinking when it won't start like this -- which indicates a transmission problem. I don't think there was any pattern to it at those times -- just on and off about every second."

My SECOND PROBLEM is a bit more severe. When I'm driving the car, after about ten or fifteen minutes it shuts down. It happens at stoplights and while driving. It is not speed dependent either. The first thing I notice is the gas pedal loses power, then the steering locks up, and finally the brakes get REALLY hard to use. I then find myself praying it makes it to the side of the road. I took it into a local repair shop, where I was told it was the main relay's fault, that it was shorting out after it warmed up. The mechanic replaced it with a used main relay, but that night it died again. So I took it to the mechanic a third time and he replaced the used one with a new one for no charge. It sounds like it's starting stronger, and seems smoother to drive, but I'm afraid to drive it too far. Since visiting the mechanic yesterday I have driven it maybe four or five miles. It seems the first two times I brought it home from the mechanic it only lasted 8 or 10 miles before dying.

My friend was videotaping briefly when my car died, and here is a link to the video. At the end you can hear the car trying to start up. I don't know if that is any help. Ha ha.

What do you think I should do?
Was this
answer
helpful?
Yes
No

Did the policemen frightened your friend that he dropped the camera? ;)

Seems to be two faults and one of it has been addressed with the replacement of the PGM-FI main relay. Guess you do not see the D4 light blinking while starting.

The two most common causes for starting difficulties due to electriacl faults are the PGM-Fi main relay and ignition switch.

I take it to mean the dashlights were not showing as you did not notice the engine stalling except for the response from the throttle etc.

When engine stalled without the dash indicator lights showing, the power supply has been interrupted and the ignition switch is one of the most common cause.

The next time it is difficult to start, turn ignition OFF. Slowly turn to ON. Note if the dashlights are showing and do they flicker.
Slowly turn to START and note the indicators, if the flicker or goes out, the switch is bad. Sometimes when the ignition switch fails, the engine would start but once the key is released, it stalls.
SPONSORED LINKS
Was this
answer
helpful?
Yes
No

I am currently troubleshooting a fuel delivery issue on a 1990 Honda Accord. I have already tested the Main Relay both from the connector and the relay itself and it tested OK. Proceeded to empty and drop the fuel tank since my 90 accord only has 1 access panel for the fuel gauge sending unit which wasn't much help for this issue.

At this point I have removed the tank and now that I have open access to the fuel pump connector I put a meter to that and flipped the key and low and behold I have no power at the connector. My assumption now is that I must have a break in the wire unless I am missing something.

My thought now is to trace the wires from the fuel pump connector back towards the front of the car and see if I can find a break or test and see power being sent out towards the pump.

Any thoughts for my process or advice on where else to start?

Tj
Was this
answer
helpful?
Yes
No

RASMATAZ
Check the yellow wire if its open from the main relay to the fuel pump-
Was this
answer
helpful?
Yes
No
+1

WRENCHTECH
Let me add this.
Don't be expecting power there for more than 2 seconds after the key is turned on if at all. It should resume when you start cranking.
Was this
answer
helpful?
Yes
No

TJSLRS@GMAIL.COM
Thanks for the responses. Just thought I would update this since I have recovered and resolve the issues.

First let me say that I actually had 2 issues which is what was complicating things a little bit.

1) Intermittent issue with the MAIN RELAY (which was located under the dash cluster and hidden by the cruise control box.
2) Fuel pump was faulty as well.

Originally when testing things out the RELAY tested ok but after putting it back up into its space found that it was no longer working which threw me.

Pulled the MAIN RELAY back out again and bypassed the relay to test current to the fuel pump connector which now gave me a constant 12. Xx volts. This answered my original question.

NEXT STEPS:
Found a nice article on repairing MAIN RELAYS. Apparently there is a problem with the soldering method used on the original RELAYS causing intermittent failures over time. Benched the RELAY and de-soldered / re-soldered all connections. Tested the RELAY again and it tested OK.

Re-installed the RELAY and retested @ the fuel pump connector and it still tests OK. I purchased a NEW RELAY and will be holding on to it just to be sure the intermittent issues caused by the RELAY are gone.

Replaced the Fuel pump and re-installed the pump and tank in the car.

Voilla I am on the road again.

Thanks again for the replies and Hope this post helps anyone else who might run across a fuel delivery issue.

Tj
Was this
answer
helpful?
Yes
No

DELY0575
Where is it located?
Was this
answer
helpful?
Yes
No

RASMATAZ
There you go its located below PGM_FI main relay Check out the diagrams (Below). Please let us know if you need anything else to get the problem fixed. 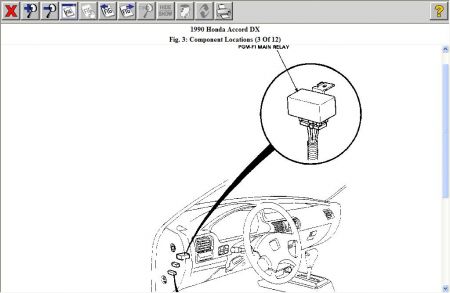 ESTORM
Hi does a 1988 Honda Accord LX have a main relay and if so where is it located?

BLUELIGHTNIN6
Your vehicle's EFI Main Relay is located under left side of dash, above fuse/relay block.

Thanks for using 2CarPros. Com!
Was this
answer
helpful?
Yes
No
+1

I Bought My Accord 2 Years Ago. I Am Currently Getting Ready To Put A Third Battery Into The Vehicle In As Many Years. I Would Like To...
Asked by carbaryll14 ·
1 ANSWER
2007
HONDA ACCORD

I Had Been Having Battery Problems After Leaving My Lights On A Couple Years Ago Over Night. My Cars Ignition Was Left In The Lock Position...
Asked by cag0943 ·
18 ANSWERS
7 IMAGES
2006
HONDA ACCORD

This Has Happened About Four Times In The Last Four Months: I Try To Start The Car And It Is Dead. The Clock Is On But Nothing Else. The...
Asked by minmdm ·
36 ANSWERS
1 IMAGE
1999
HONDA ACCORD

Please Help No Power To The Driver Side Fuse Box

Usually I Can Figure Out Whats Wrong But I Have Try Everything I Can And Still At Lost, Its A 99 Accord Lx Sedan. Lately I Notice That...
Asked by RomeoOG ·
16 ANSWERS
1 IMAGE
1999
HONDA ACCORD
VIEW MORE 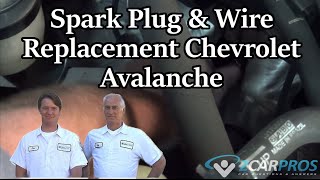