No start, no crank after battery removed for many hours

Question:
If the battery is removed from the car for 5+ hours and reinstall the battery back, will it cause the anti-thief (immobilizer system) not to recognize the chip in the key which might cause the no start, no crank issue? If so, how do you resolve this problem? Is there a way to reset it or only a Mazda dealer can do it, how much does it cost?

General information:
Let me starts by saying the car starts-up normal, no issue at all before the battery was removed. To cut the story short, this is what I did that cause the no start, no crank. I wanted to re-mount the TCM (transmission control module) to a different location due to the TCM overheating from lack of air circulation which caused the "at" fault code for many mazda owners. I wanted to be pro-active before that happens to me, I took the advice from many Mazda owners to re-mount the TCM on the firewall to avoid the overheating issue.

Before I can access, disconnect, re-mount and re-connect the TCM, I had to remove the battery entirely and disconnect the ECU or PCM mounted next to the battery box. It should be a 1 hour job but after I removed the battery and all the parts mentioned above, I was called way to work on other things. Five hours later, I came back and re-mounted the TCM to the firewall, reconnected the TCM, ECU/PCM and re-install the battery. Went in the car, turn the key and nothing happen. No start, no crank (total silence) except for the illuminated lights mentioned above.

I am thinking, maybe the battery was removed for too long (5+ hours) which caused the anti-thief system (immobilizer) not to recognize the chip inside the key anymore. However, my remote works, I can lock, unlock, armed and disarm the car. At this point, I am lost. What cause this problem and how can I resolve it? Does anyone knows how to reset or re-sync the anti-thief system to the key? Is there something I have overlook? Thank you!

WEBBEYOND2000
I just wanted to clarify from my description, the working remote I am referring to is a separate piece and are not integrated with the key.

I have recorded a video today trying to start the car and it had the same symptom. Please look at the video. If you need anything else, please let me know. Thank you!
Video (Click to enlarge) 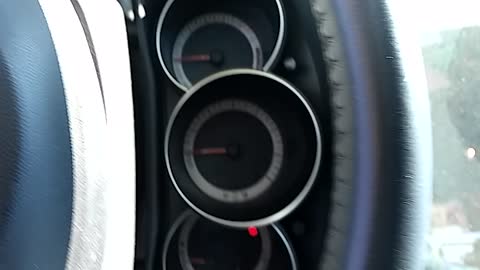 WEBBEYOND2000
Here is a picture of the dash panel light. I noticed the Security Key light does not show up and it is always like that from the beginning. After I insert the key and turn to the ON position, the blinking Security Key Light goes away in a few second but the engine will not crank. Since I don't have the Security Key Light blinking all the time, does that mean it has nothing to do with the Anti-Thief System and Its something else instead?

Just a thought, when I re-mounted the TCM to the firewall away from the transmission body, the TCM is no longer grounded to the body anymore. The firewall is painted and there is no grounding. I am not sure if that could have caused all these problems. However, I believed (not 100% certain) the TCM grounding is provided from the wire harness. I could be wrong.
Image (Click to enlarge)

Ground is provided via a wire in the connector. See the attached picture. Check that ground. Also, I noticed that there is no gear indication on the dash. Check the ground. The TCM isn't allowing it to start. It isn't getting a signal from the range sensor (neutral safety). I don't feel this has anything to do with the security system. Also, check the fuses I have in pic 2.

Joe, thank you very much for your help. You are correct, the Trans-axle Range Switch (Neutral Safety) was the problem. I replaced the switch and the car fired up! Thank you again and have a great day!
Was this
answer
helpful?
Yes
No

JOE F
You are very welcome. I'm glad that you got it running.

Take care and let us know if you have questions in the future.

This Is An Ongoing Issue And It Is Starting To Get Annoying. My Car Just Won't Start! I Mean I Put The Key In The Ignition And The Radio And...
Asked by traycee ·
2 ANSWERS
2007
MAZDA 3

GUIDE
Car Not Starting - Easy
We are a team of ASE certified mechanics that have created this guide to help you get back on the road, please use gloves and safety eyewear before you begin. We have listed...

The Car Will Not Start But The Lights And All Turn On...

How Much Could An Electrical Problem Cost Me? And What Could Possibly Be The Problem?
Asked by Anonymous ·
1 ANSWER
2008
MAZDA 3

I Put More Oil In It Cause It Was Low I Put Way To Much On Accident Drove Down The Block To Go To Friends House To Drain The Oil Out As Soon...
Asked by kurtj4 ·
1 ANSWER
2010
MAZDA 3

One Day The Car Wouldn't Start. Does Not Make A Sound When Turn The Key. The Battery Is 1.5 Months Old. Jumped The Battery, It...
Asked by CalTenCox ·
5 ANSWERS
2 IMAGES
2009
MAZDA 3

After Pressure Washing The Engine The Engine Had A Small Miss But Still Ran Good, After Sitting One Week I Tried To Start The Engine And...
Asked by semcx ·
1 ANSWER
1993
MAZDA 3
VIEW MORE