I have a 1988 Chrysler Le Baron 2, 2 turbo cabrio and I already bought it broken (thought it was gonna be easy to fix it and enjoy the car) and I have no more ideas what could that be.

The engine won't start, there is no spark. I receive the error code 54 and have no more ideas for it.
The starter is ok, it's cranking, but the engine will not engage.
The fuel pump relay seems to be working, as I can feel it "click" on when the key is turned to start the car. I also hear it working when I stand close to the tank. Fuel filter looks like it must have been replaced recently.
I have the power module and the turbo logic module as 2 separate parts (as in 86-87 models).

It happened few times that the engine started while cranking, then it worked for a while and turned off suddenly. I even got it once working for like an hour and then I had to tug it back home. So sometimes something happens and the spark shows up, but it happened only like 5 times.

The computer might have been already replaced once because there is written: "81 dodge b4 600"


I think it could be the logic module, but before replacing it I want to be 100% sure that I checked every other possibility, because it is an expensive adventure.

I will appreciate every useful hint, hoping for finally getting it repaired.
SPONSORED LINKS
Do you
have the same problem?
Yes
No

HMAC300
There is no code 54 however there is a code 53 which means the smec is bad see pics for diagnosis also make sure your auto shutdown relay is good.
Images (Click to enlarge)

LEBARON100%
Thank you for you quick answer!

There must be the code 54, I counted it many many times and it is always 54.

Doesn't it mean that my ASD relay works, if I can hear the fuel pump working? If not, how to check it then?
SPONSORED LINKS
Was this
answer
helpful?
Yes
No

HMAC300
Our site under electrical tells how to check a relay or type in search engine how to check a relay. As far as a smec our manual shows one on lh front fender but i'mnot gonna argue the point car is to damn old. See pics for diagnosing code 54
Images (Click to enlarge)

It may be possible that my car was built in 1987 (like in December) but registered in 1988, that would explain why it has the logic module from older models.

I diagnosed code 54 according to your screenshots, I have around 8 Volts on both connectors (No. 1 and No. 2) which would mean broken distributor sync pick-up, but I have just replaced it for a brand new one.
Is it possible that a brand new part is broken? I am sure it didn't get broken while being installed. The rotor spins when cranking the engine.

Can we have here some other issue?
May that be some wire or can it be the logic module failure?
Was this
answer
helpful?
Yes
No

HMAC300
There should be a production date on your car, if spark goes to dist then it's either the rotor or dist cap. If you don't have the correct system on your car then the part may be incorrect did you check the wire going to smec? That may be frayed or grounding out. It may be your logic board is bad as well. Or your pickup is a cheap one and not made to specs. A lot of Chinese junk is like that.
SPONSORED LINKS
Was this
answer
helpful?
Yes
No

LEBARON100%
Maybe I should double-check the installation as the error indicates the camshaft position sensor? I mean the wiring from the camshaft sensor plug to the ECU plug

But where can I get the diagrams from? I tried to find some in the internet but there were none. Do you have any?

+ If the rotor spins while cranking the engine, can it still be bad?
Was this
answer
helpful?
Yes
No

HMAC300
If there is no spark to dist and rotor turns and none to plugs then either a rotor or dist cap. As long as it spins the sensor should work. Blk/ lt blu powers other sensors
Image (Click to enlarge)

LEBARON100%
I've just checked the voltage on the ignition coil:
after turning the ignition switch it's 0, 7 V less than the battery voltage for one second
BUT it's gone when cranking the engine, it's 0, 2V then.

The ASD relay is turning on for 1 second when turning the ignition switch.

About the year of production: the nameplate is in German, but on the windows there's 87.

I told you I don't have 60-pin SMEC. All of the screenshots you attached are for 88.
Was this
answer
helpful?
Yes
No
+1

HMAC300
Here iis one from an 87 which in previous replies I asked for a production date which you did not give. Happy hunting
Images (Click to enlarge)

unfortunately it is still not working.
I don't know what else could I check, starting to become hopeless.
SPONSORED LINKS
Was this
answer
helpful?
Yes
No

HMAC300
I have no other suggestions/comments.
Was this
answer
helpful?
Yes
No
-1

I solved the problem - bought a new logic module and after its replacement the car is all fine!
Was this
answer
helpful?
Yes
No
+2

KEN L
Glad you could get it fixed, that kind of problem can be tough. Please use 2CarPros anytime we are here to help

LEBARON100%
Hello again Ken!
I was happy too soon - after few days of driving something caused the same thing again: no spark, no start, but no flash codes either.
Can it be that something burnt the new logic module? It happened after the engine reached a very high temperature.

Can you please advice what could make the new logic module broken?

I already ordered another one but I don't want to put it in before I am sure it won't get broken again - this would be the third already.

Almost hopeless thanks in advance,
Paulina
Was this
answer
helpful?
Yes
No

I would try changing the engine temperature sensor, it sounds like it is shorting out.

Here is a guide that will help show you what you are in for when doing the job and a diagram (below) on it location on your car.

LEBARON100%
Hello Ken,
thank you for advice!
I measured the resistance of the present coolant temperature sensor and it is 12 000 ohms so I assumed there is no short circuit. Should I replace it anyway?

Many thanks for helping me out!
Cheers,
Paulina
Was this
answer
helpful?
Yes
No

HMAC300
I made a mistake in our manual they don't list code 54 but I went to a different area and found code 54 it's a distributor problem see pics for tests to do to diagnose this. If it leads to what is called a smec that is the computer as faulty. Follow tests in order of pics.
Images (Click to enlarge)

thank you for joining again, but the 54 error is long gone - it disappeared after I installed a new logic module. I also told you already that in my car there is NO 60-pin connector, because my car appears (after decoding VIN) to be made in 1987. 60-pin connectors were present in later models.

Now my problem is that I can't run the engine although it cranks, I don't have any flash codes and for me it looks like I have to replace logic module again. But why?

Thanks in advance!
Was this
answer
helpful?
Yes
No

Four-cylinder, Automatic Transmission With 65,000 Miles. Pulled Up To A Stop Sign And It Shut Off. Had To Tow It Home And Now It Will...
Asked by cetillman2 ·
1 ANSWER
1 IMAGE
1988
CHRYSLER LE BARON 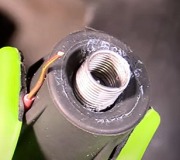 Car Will Turn Over But Does Not Start And Looks Like...

Battery Was Low And Car Was Jumped And Able To Be Driven. Next Dy Car Was Put On The Charger. When It Was Attempted To Start The Starter...
Asked by patman123 ·
2 ANSWERS
1994
CHRYSLER LE BARON

I Have A 87 Lebaron 2.5 Efi That Has Now Spark. I Have Tested The Coil For A Spark By Hold In The Secondary Wire Near A Ground. Thinking It...
Asked by lukeJ ·
6 ANSWERS
1987
CHRYSLER LE BARON

My 1990 Chrysler Lebaron Wouldnt Start All Of A Sudden One Morning A Few Days Ago. I Figured Out It Doesnt Have Spark. Ive Changed Almost...
Asked by takedownrcm ·
3 ANSWERS
1990
CHRYSLER LE BARON
VIEW MORE