This story consists of a mini cooper S year 2007
the car was driven for about three miles, not topping 40mph in a neighborhood setting.
The clutch was ridden bad, the car smelt like burning rubber.
A month later the car breaks down, when they crack it open they said the clutch had been torn up, the fly wheel was burned out.
Ever since that three mile drive the clutch had been loose, and the smell didn’t go away, It was believed that it was a smell in the fabric but it was the engine.
The place it was taken to put a $2400 price tag to fix.
It was determined the problem was a result of misuse so the warranty won’t cover it.

My question is how much of a influence the 3 mile trip have on it?
SPONSORED LINKS
Do you
have the same problem?
Yes
No

It would be quite easy to destroy a clutch in that short drive, the amount of heat and friction created my the clutch if it was ridden is enormous, there are definite signs that are consistent with this type of problem, most mechanics will pick up on this straight away. 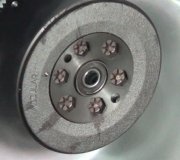