KMANDRELL34
AC stopped blowing cold air. Added refrigerant followed directions to the T worked great for about a day started blowing air again. Added fix a leak with red dye and refrigerant worked great again for about a day then started blowing air again. Did not find any red anywhere looked and looked, but could not find any red that would indicate or expose a leak at least not anywhere that is visible without taking apart anything. It is not making any unusual noises or running different other than a very low hiss which I can only hear from the cab of car. While driving appears to be heard around the dash area.
SPONSORED LINKS
Do you
have the same problem?
Yes
No

CARADIODOC
Are you searching with a black light? The dye may go in red, or dark purple is more common, but it shows up as a bright yellow stain under the black light. Hissing in the dash indicates the evaporator is leaking. There is a condensate drain pan under it, and the water drains out behind the right front tire. Look under the hood, on the passenger side of the firewall, for a four inch long rubber hose with a ninety degree bend in it, hanging down. If you find dye inside that hose, that verifies the evaporator is leaking.

Leak sealers rarely work, but especially in an AC system, you do not want to add anything that will plug a leak. The heart of the system depends on a very small, carefully-controlled orifice, or valve, to control the flow of the refrigerant. The goal is to allow in just enough refrigerant that half is liquid and half is vapor. The point at which the liquid vaporizes is where it gets real cold. If your chemical blocks that controlled leak, the flow will not be correct. The cooling will end up taking place under the hood in the hose coming in or going out. That will not cool the air blowing into the car.

Because of these additives, we have machines now to identify when something has been added to AC systems. That prevents our equipment from becoming contaminated, which could render it inoperative, or it could contaminate the next car we use it on. Most reputable shops will not work on cars when they find that things were added. Your mechanic may come up with the same diagnosis as I did if you provide the same dandy observations and symptoms. During the evaporator replacement, he will probably want to flush the system to insure it works properly.

Be aware too that evaporators can spring a leak on any car, but one thing that can aggravate the problem is when refrigerant is added to a system that was completely empty. We always pump it into a vacuum for at least half an hour. In a vacuum, water boils at 77 degrees, and can be pulled out before the refrigerant is pumped in. If any water vapor is in the system, it combines with refrigerant to form an acid that attacks metal parts. That is a common cause of leaking evaporators and condensers. The water gets in as the humidity in the air when there is no refrigerant under pressure to keep that air out.
SPONSORED LINKS
Was this
answer
helpful?
Yes
No
+1

KMANDRELL34
Thank you sir.
Was this
answer
helpful?
Yes
No
+1

KEN L
Please let us know what happens and upload pictures or videos of the problem.

My 06 Hyundai Sonata A/c Blows Cold Then Warm Air For A While, Its Been Checked Compressor Is Good System Is Charged So What Could Be The...
Asked by drkbrn23 ·
3 ANSWERS
2006
HYUNDAI SONATA

My Car's Ac Makes A Hissing Noise When The Ac Is...

My Car's Ac Makes A Hissing Noise When The Ac Is Engaged. The Defrost And Just Vents Running Don't Make Any Abnormal Noise. The Ac Still...
Asked by sandrapurdeu ·
18 ANSWERS
2006
HYUNDAI SONATA

Hi I Put A Set Of Gauges On The Car And The Hi And Low Sides Read The Same, About 80 Psi. I See This Car Uses A Compressor That Is...
Asked by Retired Tech ·
5 ANSWERS
3 IMAGES
2011
HYUNDAI SONATA
VIEW MORE 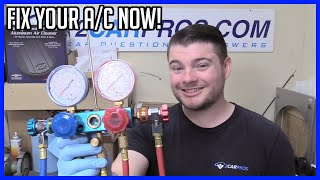