Engine is stalling out while driving

STACIHARRIS
It has been stalling and dying on me while driving but I am already having transmission slippage. Are the two problems related? Ive have some electrical work done for the same problem and have replaced fuel pump, plugs and filter. Also have had tuneup recently.
SPONSORED LINKS
Do you
have the same problem?
Yes
No

SATURNTECH9
It sounds like you have a fuel pulp going out but to sure this guide can help us find the problem.

Please run down this guide and report back.
Was this
answer
helpful?
Yes
No
+1

STACIHARRIS
I replaced the alternator with a used one about 5 months ago and had a new battery put in at the same time. Yes the check engine light is on.I thought that was due to the transmission.I can take them to get checked. When the engine shifts down is when it tries to die or does die. The speedometer drops down before it does. Sometimes I can put it in Neutral and press on gas then I put it back in drive and it will catch.
SPONSORED LINKS
Was this
answer
helpful?
Yes
No

SATURNTECH9
I would really check that alternator since you put a used one in there thats a wild card. Test all those things and get me the exact code numbers you have.
Was this
answer
helpful?
Yes
No

STACIHARRIS
Okay no problem.I'll get back to you soon. Thank you for your quick response and help.
Was this
answer
helpful?
Yes
No

SATURNTECH9
Your welcome keep me posted.
SPONSORED LINKS
Was this
answer
helpful?
Yes
No

PACHYAUTO63
This vehicle just shut off going down the road. Fuel pumps working, starter works, put new coil. Getting fire to coil but no fire to spark plugs. What is going on?
Was this
answer
helpful?
Yes
No
+1

When you crank the engine does the tachometer move up a little? That will tell me if the crank sensor is working.

Did you check the compression?

Can you hear the fuel pump run?

LONNIE HARPER
The engine does fine but quits every now and then. Some times a lot and some time it will drive for a few miles just fine. My catalitc converter is shot but I think maybe I have a fuel module or simular problem. The service engine light came on over a year ago but I am in bankruptcy and am disabled and cant afford to get it fixed.
Was this
answer
helpful?
Yes
No

JACOBANDNICKOLAS
A plugged converter will cause a power loss and the engine to die. Also, if the check engine light is on, you need to determine what code is stored in the computer. What I would suggest is this. Take the van to a nationally recognized parts store and have them scan the computer. Most do it for free. Once you find out what codes are stored, let me know.

SASINCLAIR9
My 1997 Dodge Sport Caravan with 151,000 miles, stalls repeatedly when it is cold out, when you are slowing down, whether on the highway or at stop light/sign or when going under 10 mph in traffic or when slowing down to turn a corner. The engine will also occasionally race or buck forward, usually while traveling at around 45 mph. I have had it serviced by a local mechanic for many years and they are unable to locate the problem. It's had a tune up, the timing has been checked, the Cam Sensor and Crank Sensor have been replaced and then retested using a computer - no code came up to reveal an error. In addition, the gas tank has been flushed out and the fuel line, and fuel pump replaced. The car drove in a 24 hour period ok, but then started stalling again. The mechanic believes something is touching the crank sensor which they have replaced twice. They noticed after installing the crank sensor that after driving it, instead of the 30,000 of inch gap, there was a larger gap which suggested something was touching the crank sensor. I have had the computer replaced twice so I am not interested in replacing it again. Any thoughts?
Was this
answer
helpful?
Yes
No

RASMATAZ
Have the fuel pressure check this will rule out a bad pressure regulator, fuel pump, fuel filter, and in tank sock.

Check the EGR for carbon and proper operation.

Last test the ASD relay
Was this
answer
helpful?
Yes
No

PASTORJEFFBROWNING
After running AC for 5 minutes or more the engine shuts off. After apox. 30 minutes the engine will re-start. Problem only occurs when running AC-Temp guage reads normal, all other electrical system functions work normally, only the engine will not work. It cranks but will not catch. Any directions or ideas greatly appreciated.

Jeff
SPONSORED LINKS
Was this
answer
helpful?
Yes
No

RACEFAN966
Ok I need you make the car stall again by using the A/C and then when it stalls shut it off and pull the auto shut down relay it is in the underhood relay fuse box. Now using a digital multi meter check ohms of resistance between term 85 and 86 should be between 70 and 80 ohm. It this is not in range then replace it if it is good here then we will do an operations test on it. Let me know what you find. Here is a pic to you know what term is what. 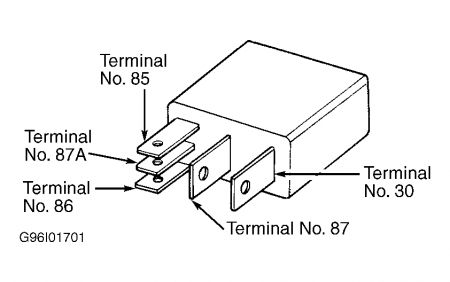 MITCHYSKIS
I have a 97 Dodge Caravan, 83,000 miles, that had an engine tune-up and transmission rebuilt within the last year and a half. 3 months ago, the car started stalling every once in awhile, sometimes while stopped and sometimes while driving at low speeds, and the engine cut out once in awhile. The problems have gotten progressively worse. Now, the engine has a really hard time staying in gear, especially on the highway and the vehicle stalls all the time. Today, the "Service Engine Soon" light came on. The engine always urns when starting the car up or immediately after it stalls, but I have to press the accelerator for a minute or two in order to get it to start running. It seems like the car has a hard time staying running and staying in gear. Can you offer any advice?

Thanks in advance!
Was this
answer
helpful?
Yes
No

JACOBANDNICKOLAS
The first thing I need you to do is have the computer scanned. If the check engine light is on, there is a trouble code stored in the computer that will help point us in the right direction.

Most parts stores will scan it for free, so have that done and let me know what you find.

Joe
Was this
answer
helpful?
Yes
No
+1

MITCHYSKIS
I had the computer scanned and a lot of codes printed out. The "Service Engine Soon" light came on 2 days ago, although the car has been having this problem for months. The codes say: "Man. Absolute pressure/BARO or MAF(Mass Air Low) Sensor condition". The 2nd code says "Vacuum hose off, cracked or passage blocked-Engine mechanical timing condition". 3rd code "Throttle body intake tube loose, off, or cracked". 4th code "BARO (barometer)/MAP defective". 5th code "VAF (van Air flow) MAF (mass air flow) sensor dirty or defective". The man at the part store said that I would most likely need a new MAP Sensor and/or new Idle Air Control Valve.

What do you think?
Was this
answer
helpful?
Yes
No

JACOBANDNICKOLAS
The MAP sounds like it is one of the problems. As far as the MAF, I would clean it first. They make a special cleaner for it. The IAC can cause the engine to die, but usually causes an unstable idle.
Was this
answer
helpful?
Yes
No
+1

DICECORP88
A while back, me and my buddies decided on removing the whole dashboard to paint it. When putting it back together, I started noticing that certain lights would turn on. After a while, they would turn off. The van ran well regardless. Later on, the van would stop running. It would ignite normal and then the motor would just turn off. I notice when this happens, the odometer and the gear indicator (both are digital) would not function. After banging on the dashboard a couple of times, the odometer and the gear indicator would turn on and the van would then start normal. Other times, this would occur during driving. All warning lights would turn on while the fuel indicator, odometer, tachometer, speedometer, etc. Would stop working. What could be the problem?
Was this
answer
helpful?
Yes
No

JACOBANDNICKOLAS
Did he remove the body control module when he did this?
Was this
answer
helpful?
Yes
No

DICECORP88
From what I understand, no. The only thing removed was the instrument cluster in order to paint the cover of the gauges
Was this
answer
helpful?
Yes
No

My Van Just Shuts Off While Im Stopped And In Drive. My Foot Will Be On The Brake At A Stop Light Or When I Want To Shift Into Reverse And...
Asked by sherinap123 ·
1 ANSWER
1997
DODGE CARAVAN

GUIDE
Shuts Off While Driving
An engine that stalls while driving and then starts back up again, either immediately or after a short time is different from an engine that just wont start or if the...

Here Is My Problem The Van Started Stalling And Check Engine Light Came On. Codes Read: P0106-map Sensor Has A Baro Reading Below...
Asked by Bigike ·
53 ANSWERS
1991
DODGE CARAVAN

Engine Stalls While Driving? Starts Right Back Up?

Driving My Dodge Grand Caravan On A Long Highway Trip - About 100 Miles Into The Trip, The Whole Car Died - Like The Ignition Was Turned...
Asked by wmrapp ·
26 ANSWERS
2006
DODGE CARAVAN

Sometimes It Drives Fine And Sometimes The Engine Will...

Some Times It Drives Fine And Sometimes It Will Start Stalling And Cutting Out Real Hard But If You Let Off And Slowly Ease Back Into Gas It...
Asked by gcb2369 ·
47 ANSWERS
2003
DODGE CARAVAN
VIEW MORE