First off, I am very bad at taking care of my car, so all of the problems I'm asking about may or may not be related. Right now I need to have my breaks fixed and also, when sitting on a minor hill, I practically have to yank on it to get it into another gear.

On to my problems.

#1. My car is making a whining noise that, at first, I only heard during acceleration. Now it's gotten to where I can hear it at all times, but seems to sound more high pitch when I accelerate.

#2. When I turn my steering wheel for a sharp turn, it makes a sound like it needs to be "greased" or something and just sounds like it's struggling to turn.
SPONSORED LINKS
Do you
have the same problem?
Yes
No

MMPRINCE4000
It sounds like the serpentine belt is bad I would start by replacing it to see if that does the tick. Here is a guide to help you.

Please get back to us.

Cheers
SPONSORED LINKS
Was this
answer
helpful?
Yes
No
+2

MATT AND BETH
Have you found resolution to your car making a whining noise? Does it sound as though the noise is coming through the speakers? And continues even after the car is turned off?

We are experiencing this issue with our 2006 Grand Prix. We have been in arguments with two different dealerships as they can't seem to fix the problem.

We take very good care of our cars - so I question if your not taking great care of your auto is the true issue.

Help! We are stuck with an annoying noisy car!
Was this
answer
helpful?
Yes
No
+1

SPUDWISER
I have a 1995 grand prix and I was having the same issue. Mine turned out to be a lose exhaust system up by the manifold. I replaced the flange and had them tighten the exhaust and it fixed the issue. I don't know if it will help you but it worked for me, and the flange only ran me about 15 bucks used.
Was this
answer
helpful?
Yes
No
+6

RENTASQUID
Our car (2004 G.P) made similar noises. The shop said that it was the rack and Pinion steering. They said it needed more fluid. They said it is leaking internally through a seal(I'm guessing into a CV boot). They filled the reservoir back up and the sound went away. They said that eventually the steering will fail.
Was this
answer
helpful?
Yes
No
+1

KELSIEKAE04
I have a 2004 Pontiac Grand prix GTP and it is making a whining noise under the hood. It also gets louder the harder I step on the gas. We have replaced the alternator so that is not the problem. We have started the car without the belts on and it doesn't make the noise anymore but if we just take of the belt that is on the supercharger it makes the noise. Were at a loss and just dont know what else to test.
SPONSORED LINKS
Was this
answer
helpful?
Yes
No
-1

KELSIEKAE04
Its not the power steering pump as it doesn't make the noise when I turn but it could possible be the pully on the pump. We already took the belt off the supercharger and tested it and the noise is still there so its not that. So the only options we have are alternator(new), Power steering pully since the pump is new, Tensioner (new) Water pump, Crank, and A/c. I really dont want to replace them all to figure our what it is, that will be expensive. Do you know of a way to test this to find which one it is? We have tried spraying WD40 on each of them seperately but it didn't work.
Was this
answer
helpful?
Yes
No
-1

CARADIODOC
The power steering pumps are the most common cause, not from the pulley, but from the buzzing of the internal check valve. We have already had instances where rebuilt pumps are just as noisy at first but the buzzing dies down over time. You can verify that by listening with a stethoscope at the connection for the high pressure line where it leaves the pump. This is common enough that we don't even bother to diagnose the generators or water pumps. A quick poke with the stethoscope is all it takes.

That buzzing noise is a lot different than the squeak or chirp from the serpentine belt. Don't use any type of lubricants or anti-squeal sprays on those belts as road debris and dust will stick to it and make the squealing worse. To identify a belt squeal, dribble a little water on the smooth side of the belt while the engine is running and the noise is present. If the noise changes, suspect one of the pulleys is misaligned. If nothing was recently replaced, that means the spring-loaded tensioner pulley is the most common cause. The pivot wears and lets the entire arm sit crooked, then the belt has to slide sideways across it as it goes around it. That sets up the squeal.

If the noise was not there until after something was replaced, check that item to be sure it's mounted correctly. The belt should be perfectly inline along all of the pulleys. Look for one where the belt is off-center compared to the rest of them, typically by 1/8" or more.
Was this
answer
helpful?
Yes
No
+2

I have a 2006 Pontiac Grand Prix and for the past couple of months I've noticed that when I acculate or turn the corners it whinings, it doesn't do it all the time but it's starting to get worse and it's really load.

Thanks.
Was this
answer
helpful?
Yes
No
+2

MMPRINCE4000
Have the front CV joints inspected for tears is boots/lubricant leaking, if you find anything they will need to be replaced.

RACHMATT
How much does CV joints cost to repair. The PS fluid is good.
Was this
answer
helpful?
Yes
No
+2

My vehicle has had issues that started near 60,000 miles. The car will make a high pitched whining noise with startup and slow accelration, then goes almost completely away during coasting. It was just happening once in a while and then became more and more apparent. I take very good care of my vehicle. I have also had past issues with steering. The steering wheel would give a thumping vibration while turning the wheel. I took it in several times and finally found a dealership to fix it. The tires on this car do not stay balanced either. I have had my car balanced three times since January and I still feel a vibration. I have been VERY disappointed with this vehicle purchase and will never purchase another GM car. The Grand Prix is nice to look at, but a let down as far as integrity. To other owners: I fee your pain!
Was this
answer
helpful?
Yes
No
+2

The whining may be low fluid level in trans, or could be an assy. Driven by the serpentine belt.

RICEJA
My car is making a whining noise that sounds like it's coming from behind the engine on the driver's side. The noise happens under most conditions: in park, while accelerating, the only time it doesn't make the noise is when I put the car from park into drive but keep my foot on the brake. I was told it could be my transmission fluid filter so I recently got it changed but the noise is still there. It can't be a belt because they're on the other side of the engine.
Was this
answer
helpful?
Yes
No

DOCFIXIT
Maybe oil pump for trans
Was this
answer
helpful?
Yes
No
+1

why is my car making a whining noise while driving?
Was this
answer
helpful?
Yes
No
+1

CRAIG2000
If your car is supercharger equipped it is normal to hear a whine when you see the boost meter engage.
Was this
answer
helpful?
Yes
No

EAGLE50
I can hear it louder when I lean closer to the dash. So I think it is coming from under the hood, not rear end.
Was this
answer
helpful?
Yes
No

I have a 2003 Grand Prix that just started a low whining sound when I accelerate at low speed. Appears to be getting a little worse each day. What could this be? I do not notice it being any worse when turning corners.
Was this
answer
helpful?
Yes
No

JACOBANDNICKOLAS
Can you tell aprox where the noise is coming from? THe engine area, wheels, transmission.
Was this
answer
helpful?
Yes
No
-1

What Could Be Causing This Clicking Sound Only When My...

What Could Be Causing This Clicking Sound Only When My Car Is Cold?
Asked by Anonymous ·
2 ANSWERS
2006
PONTIAC GRAND PRIX

I've Been Battling This Problem For The Better Part Of Two Years And Everything I Have Tried Has Yielded No Positive Results. The Issue Is...
Asked by xxmattfxx ·
15 ANSWERS
2000
PONTIAC GRAND PRIX

Car Makes A Humming Noise At 30 Mph And Up, But Upon Deceleration Still Hums Below 30mph. All Fluids Great, But P. Steering Little Low....
Asked by buddysking ·
4 ANSWERS
2002
PONTIAC GRAND PRIX

Loud Knocking Noise Coming From The Front Side Cylinder And The More I Push The Cash The Faster The Knock I Can Hear A Noise That Is Not A...
Asked by ezstrt ·
2 ANSWERS
1999
PONTIAC GRAND PRIX

2005 Pontiac Grand Prix 6 Cyl Automatic The Car Makes A Humming Noise And It Only Happens When I Make A Left. It Gets Louder If...
Asked by chepe27 ·
1 ANSWER
2005
PONTIAC GRAND PRIX
VIEW MORE 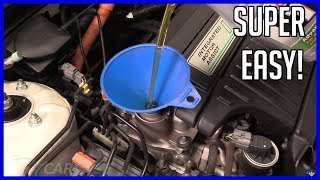