Knocking in my engine

JAMESBURROW
I put a different catalytic converter on my truck and it ended up being stopped up, so it made my engine start knocking. So I took it back off but they knocking did not stop. Where could be knocking be coming from?
SPONSORED LINKS
Do you
have the same problem?
Yes
No

Is it a knocking or ticking? If it is a knocking, that is usually an indication of a rod or main bearing in the engine. Is it loud enough for you to record and upload for me to hear?

Take a look through this link and let me know if it is helpful. Also, if you can record it so I can hear the sound, it may help. Let me know if it does it all the time (warm or cold), if it is affected by engine load or anything you can think of that may help.

I will watch for your reply.

JAMESBURROW
I'm at work right now but when I get off I'll record the sound and send it to you. It could be a ticking noise because the noise is coming from the left side of the motor at the bottom. I can hear it more underneath the truck than I do at the top. Also before I change out my catalytic converter my oil pressure gauge would bounce when idling. Now I have to keep it revved up to 1,500 to 2,000 RPM's or else the oil pressure gauge will drop and the truck will shut off.
Was this
answer
helpful?
Yes
No
+1

JAMESBURROW
And it seems to get worse when the engine gets warmed up.
Was this
answer
helpful?
Yes
No 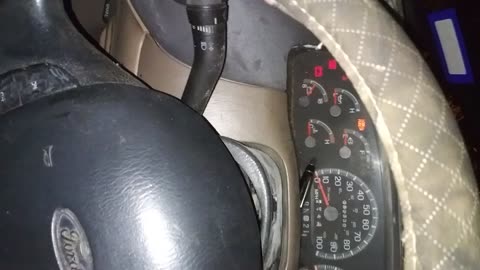 JACOBANDNICKOLAS
In all honesty, I hear what sounds like an exhaust leak (tick). However, when you revved the engine, I heard a knock when you let off. If I had to guess, I think you have a bad connecting rod bearing or one of the main bearings. If the oil is clean and full, I suspect you should remove the oil pan and actually check for a loose rod bearing.

The proper way to check bearing clearance is to use a product called plastigage. Here are the directions. I just want you to see what I am referring to. It requires a good bit of work.

1. Measure each of the crankshaft main bearing journal diameters in at least two directions.
If out of specification, install new components as necessary.

1. Measure each of the crankshaft main bearing journal diameters in at least two directions at each end of the main bearing Journal.
If out of specification, install new components as necessary.

NOTE: Crankshaft main bearing journals must be within specifications before checking journal clearance.

2. Lay a piece of Plastigage across the face of each crankshaft main bearing surface.

3. NOTE: Do not turn the crankshaft while carrying out this procedure.

4. Verify the crankshaft journal clearance.
If out of specification, install new components as necessary.

1. NOTE: Crankshaft main bearing Journals must be within specifications before checking runout.

Crankshaft - Connecting Rod Journal Taper, Out of Round

If this is the original engine and it has 300K, you would likely be better off replacing the engine simply because of wear.

Let me know if you have any questions, and I'm sorry for the bad news. Please remember that I am listening to a recording, so I could be wrong. However, the knocking was somewhat loud when you left off the throttle.

If I can help in any way, let me know.

JAMESBURROW
I have a friend that has a motor out of a 2000 Ford F150 he said he would sale me for $100.00. Would I be better off just changing motors?
Was this
answer
helpful?
Yes
No

Based on what I heard and the number of miles, it may be a good idea. You will likely have to switch components between the two engines, but it should work as long as it is also a 5.4L. When I say switch components, I'm referring to sensors and electronics. The difference in the model year may make a difference as far as connectors and so on. Just take a few minutes and confirm that sensors and such exist in the same places.

If you decide to do this, here are the directions for the removal and replacement of the engine. The attached pics correlate with the directions.

9. Disconnect the two starter cable leads from the starter relay.

12. Remove the bolts and the junction block bracket.

13. Compress the holding tabs and disconnect the heater water hoses from the heater core.
14. Raise and support the vehicle.

15. Remove the drain plug and drain the engine oil.

20. Remove the A/C line (muffler) bracket and position aside.

21. Remove the transmission fluid cooler hose from the block-mounted clip.

23. Remove the nut and the transmission oil filler tube.

24. Remove the bolts and position the power steering pump aside.

34. Slide back the hose clamp and disconnect the lower radiator hose from the oil filter adapter.
35. Lower the vehicle.
36. Support the transmission.
37. Remove the upper two transmission bell housing bolts and the wiring harness bracket.

NOTE: If engine disassembly is to be carried out, remove the rear crankshaft oil seal slinger and the crankshaft rear oil seal.

Remove the flywheel.
42. Place the engine on a suitable engine stand.

All vehicles
1. Attach the special tool.
2. Remove the engine from the engine stand.

3. CAUTION: Do not use metal scrapers, wire brushes, power abrasive discs or other abrasive means to clean the aluminum retainer plate. These tools cause scratches and gouges, which make leak paths. Use a plastic scraping tool to remove all traces of old sealant.

If removed, clean and inspect the mating surface.

4. NOTE: If not secured within four minutes, sealant must be removed and sealing area cleaned with metal surface cleaner. Allow to dry until there is no sign of wetness, or four minutes, whichever is longer. Failure to follow this procedure can cause future oil leakage.

If the retainer plate was removed, apply a 4 mm (0.16 inch) bead of silicone gasket and sealant around the rear oil seal retainer sealing surface.

Romeo engine (4.6L)
8. Install the flexplate and the bolts. Tighten the bolts in the sequence shown.

Position the engine in the vehicle, and remove the Modular lifting bar and the jack supporting the transmission.
10. Raise and support the vehicle.
11. Install the lower five transmission bell housing bolts.

12. Position and install and the LH engine mount bolt.

17. Install and tighten the four nuts.

18. NOTE: Only three bolts are required for installation.

19. Position the lower radiator hose on the oil filter adapter and secure the hose clamp.

23. Install the transmission fluid cooler hose in the clip.

I hope this helps. Let me know if you have any questions.

It Knocks When Started.

Will The Knock Caused By Back Pressure On A Cat Converter Clog Stop After Replacement Of Converter Or Is It Now Permanent? Truck Wont Drive...
Asked by fcracing24 ·
2 ANSWERS
2001
FORD F-150

I Get This Knocking Sound After The Engine Has Warmed Up For About 5 Min. It Only Knocks While It Is Being Accellerated And While It Is In...
Asked by beastgreeley ·
1 ANSWER
1999
FORD F-150

Please Help! Before I Run Out Of Money. Just Purchased This Truck.4x4, It Run Great When I Tested It. But Once I Took It In The Freeway...
Asked by BOOSHU ·
3 ANSWERS
1998
FORD F-150
VIEW MORE