CAMARO58
My daughter owns the listed above car GLS model that she is diligent about maintenance on. It has about 59,000 miles on it. While routinely driving two days ago, the air conditioner suddenly stopped blowing cold air. When she stopped at the bank, shortly after noticing the warm air, the car was spewing anti-freeze. She let it cool down, filled the reserve, started the car and it was not leaking any fluids anywhere (no hose ruptures), temperature gauge returned to normal. She drove about six miles and it began to overheat again. Been parked and not restarted since.
SPONSORED LINKS
Do you
have the same problem?
Yes
No

DOCFIXIT
Check to see if cooling fan is coming on. If not may be temperature switch or fan relay.
Was this
answer
helpful?
Yes
No
-1

CAMARO58
I checked both cooling fan and air conditioning compressor cooling fan. They are operating normally and the car is now blowing cold air. After letting the car idle until the temperature gauge reached the halfway mark, the water in the radiator is remaining still, no movement at all. Did not think the car needed to run 'hot' before water started to circulate.
SPONSORED LINKS
Was this
answer
helpful?
Yes
No

DOCFIXIT
You have found the problem. Yes, coolant should be circulating the thermostat is not opening to allow flow. Replace thermostat and you should be fine.
Make sure you let air to purge system before capping.
Was this
answer
helpful?
Yes
No
-1

CAMARO58
As I was adding water I noticed some 'pinholes' on the seam of the radiator near the top radiator hose. Are these normal 'overflow' type holes or did the weld let loose as the radiator overheated as I suspect.
Photo #1 shows the complete top of radiator.
Photo#2 is a close up of the 'pinholes'.
Thanks for all your help, just a mom with limited knowledge trying to get the kid back on the road. She has my car! 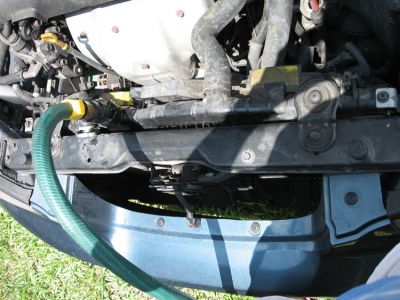 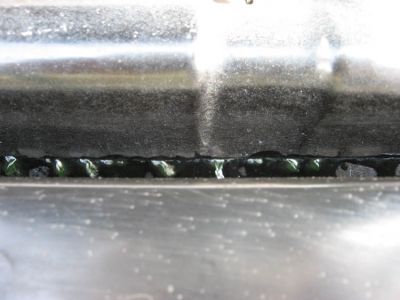 DOCFIXIT
Bummer on the radiator you are right pinholes not good.
Is that a metal tank if so a radiator shop may be able to repair if plastic no.
Are you going to DIY?
SPONSORED LINKS
Was this
answer
helpful?
Yes
No

CAMARO58
It is plastic and yes DIY, sigh.
Was this
answer
helpful?
Yes
No

DOCFIXIT
The thermostat. Follow top hose to engine housing two bolts.
Radiator on top the two black brackets unbolt fan assembly needs to come off
Also two metal lines that go to transmission for cooling need to be removed with a line wrench.
Good luck and please pm me if you need help.
Shop around for radiator and some shops do repair plastic so try that to save money.

See the guides below on thermostat replacement and radiator replacement, they are not specific to your car, but will give you an idea of what is in store.

See the diagrams below for make/model specific instructions and pictures.
Images (Click to enlarge)

CAMARO58
You have been absolutely great! Looks like we have our weekend project planned! Fortunately, my dad was a real car enthusiast and I am not afraid to tackle some of the minor repairs. Both my girls are also proficient and choose to save the labor if we can figure it out ourselves. Again, many thanks.
Was this
answer
helpful?
Yes
No

MARK6937
Your radiator is bad. The exact thing happened to my 2002 Elantra. I first noticed a mild smell of anti freeze followed by my AC blowing warm, I thought my AC went out until I noticed my car spewing anti freeze. I could not find the leak until I back traced the fluid and where it was leaking from. I replaced the radiator and everything went back to normal including the AC. This vehicle also has a problem with the Fan located to the passenger side of the front of the motor; the right one works but the one on the passenger side do not. I am almost positive your radiator id bad. They make this one with plastic seams and when it overheats the radiator bursts at the seam.
Was this
answer
helpful?
Yes
No
+2

AYNOTBIGGIRL
Overheated on my way home from the grocery store, it had not been running hot before that. I got home and sure enough I was out of anti-freeze. I filled up and then the next day same thing. I took it to a local shop and they pressure tested it and said there are no leaks in the cooling system and recommended an engine specialist. Any idea? Could this be the water pump and they just did not detect it? I just put a new clutch in so I am committed to keeping the car a bit longer.
Was this
answer
helpful?
Yes
No
-1

RASMATAZ
Could be airlock problem try bleeding the system. Has the thermostat been checked? If not, replace it. Radiator not clogged up and water pump okay?

One way to test for a bad water pump is to squeeze the upper radiator hose when the engine is hot and idling. Careful, because the hose will be hot! If you do not feel much coolant circulating through the hose when you rev the engine, the pump may be bad. The other cause might be a bad thermostat that is not opening properly (remove and inspect the thermostat), or a clogged radiator.
Was this
answer
helpful?
Yes
No

SHUGHEY
The radiator blew on my way to work Wednesday so I replaced my radiator. The car continues to overheat, I squeezed the hoses to release any air left over in the system and still nothing. So I replaced the thermostat the night before last and the car is still overheating. The heat and AC work fine and I can see the antifreeze flowing across the top of the radiator but its back flushing everything into the reservoir until it overflows and then overheats. The last thing I can think of is the head gasket but I would rather not replace that if it could be something else. Please help it is my only car and I work five days a week. All my work is done by myself.
SPONSORED LINKS
Was this
answer
helpful?
Yes
No

SATURNTECH9
Is your radiator fan working correctly?
Was this
answer
helpful?
Yes
No

SHUGHEY
Yes, both fans kick on and work properly.
Was this
answer
helpful?
Yes
No

SATURNTECH9
When it gets to normal operating temperature are both the upper and lower radiator hoses too hot to hold?
Was this
answer
helpful?
Yes
No

SHUGHEY
No, not that I know of. It only gets hot when I am on the highway doing 70 mph. Then I have to stop and let it cool off.
Was this
answer
helpful?
Yes
No

VIOLETELSWICK
I am about fed up with the problems I am having with my car so I have decided to turn to you guys for possible help. My car began to overheat and it was like a domino effect with parts that kept going out on the car. The main problems initially with the car was overheating and the transmission was slipping when trying to go into certain gears occasionally. I replaced the alternator because it had locked up, water pump, timing belt, serpentine belt, thermostat, radiator, changed the oil, tailpipe and flex pipe replaced, among other things that the mechanics found wrong once they had the car on the rack. The car now runs perfect engine wise, except that it is still overheating. There is no milky residue in the oil and there is no white smoke coming out of the tailpipe so I am pretty sure that the head is fine. When the car is at idle, the car does not overheat. I turn the heater on and the heat goes down. I am pretty sure that the fans work without the heater coming on, but I just do this to help speed things along. I was told to check my modulator valve, but I do not think my car has one. I have determined that the car starts to overheat when the transmission warms up because when the car starts to slip gears, it starts overheating even more. I have bought a bottle of this stuff that you put in transmissions to help clean the transmission and preserve gear band life span because I was told by another person that my transmission gear bands may be heating up and expanding too much which is why it keeps slipping, causing too much heat and therefore causing the car to overheat. The moral of the story is that I am tired of putting the car in the shop, being told that my problem would be fixed only to get the car out, still the problem and then right back in the shop to spend more money. I would like to find out the problem definitely before I put it in the shop again. Thanks so much in advance and I apologize for the long book I wrote above.
Was this
answer
helpful?
Yes
No
-1

SATURNTECH9
If there not both getting hot you have no circulation or you have air in the system.
Was this
answer
helpful?
Yes
No

VIOLETELSWICK
Thanks so much for your quick response! I will have that tested first and then I will let you know.
Was this
answer
helpful?
Yes
No

SHUGHEY
I mean they get hot but not unbearably hot. And I can see the antifreeze flowing. I am pretty sure I have gotten all the air out. Is there another way I could get it out besides squeezing the lines? If there is any in there.
Was this
answer
helpful?
Yes
No

My Car Was Overheating And My Check Engine Light Came On, I Put In Some Water And The Light Went Off. But It Is Still Hot, Could This Be...
Asked by louisaf ·
1 ANSWER
2002
HYUNDAI ELANTRA

GUIDE
Overheating Symptoms
An overheating engine is never a good thing to have happen. If the problem is caught quickly you can save the headache of a major engine repair. Knowing the information from...

I Have An 05 Elantra That Has Been Overheating Usually On Hot Days When The Ac Is On. We Have Replaced The Radiator (which Originally Had A...
Asked by jengirlm ·
17 ANSWERS
2005
HYUNDAI ELANTRA

I Purchased A New 2003 Elentra. From The Time I Got The Car I Had Issues. In The Hot Arizona Summer When I Would Slow Down Or Stop At A...
Asked by johnnyjumpup ·
1 ANSWER
2003
HYUNDAI ELANTRA

Is Your Engine Cool Enough to Check?