Sometimes starter will not work

VITOVONANTWON
Hello, My crv sometimes won't start when I turn the key. It is intermittent. Sometimes if I turn it again it will start. Sometimes I moved the car backwards in drive and it would start. No clicks, nothing.

Vito
SPONSORED LINKS
Do you
have the same problem?
Yes
No

Seems you have a problem with the Park Neutral Position (PNP) shift. It could be failing or out of adjustment.

The next time this happens, with the ignition switch at the ON position, check if the P indicator light is showing in dash. If not, you would not be able to crank the engine.

Another possibility is a faulty ignition switch.
SPONSORED LINKS
Was this
answer
helpful?
Yes
No
+1

VITOVONANTWON
All the recalls have been preformed on the car.
But in telling them about the problem, One thing he mentioned is that if you park the car. Then turn the ignition to start, but don't, put the car in drive, the car should not be able to be pushed forward or back.

Does anyone know if this is true?
I can push the car backward while it's in drive and engine off. It represents some wierd problem.

Vito
Was this
answer
helpful?
Yes
No
-1

VITOVONANTWON
It's not the pnp, the light on p or n was accurate.

New info though. The car would not start today and the only thing I heard when you turn the key is a fan somewhere.

Later on after several hours the car started normally.

Something is overheating. The car seems to have this problem only after short trips. Every morning the car will start.

Vito.
Was this
answer
helpful?
Yes
No

KHLOW2008
Vehicle can be moved in any gear shift position EXCEPT Park so there is nothing wrong with your description. There must be some misunderstanding here or the guy has given you the wrong information.

When engine could not be started, was there any other indication? Is there any clicking noise noise from the starter solenoid when key is turned to START?

Does the dashlights dims when turned to START position?

Is the security light blinking while this is occurring?
Was this
answer
helpful?
Yes
No
+1

VITOVONANTWON
"Vehicle can be moved in any gear shift position EXCEPT Park so there is nothing wrong with your description. There must be some misunderstanding here or the guy has given you the wrong information. "
I had a feeling that particular info was wrong.

"When engine could not be started, was there any other indication? Is there any clicking noise noise from the starter solenoid when key is turned to START?"

No Starting noise, I do hear a fan thing start up.

"Does the dashlights dims when turned to START position?"

I will double check this. I don't think anything happens.

Is the security light blinking while this is occurring?
I don't think so. In the crv it would be the green key blinking right right.

I drove tonight to a job 45 min, and parked. Turned off the car and tried to start, it did. (While everything is hot.)

I drove home, 45 min, and parked. Turned off the car and tried to start it and the problem happened.
I tried to turn the car on a second time. Nothing.
A third time and it slowely cranked, and started.

It's baffling. A person told me he had a similar problem with a honda car he had. He dropped off something, came back and the car would not crank.
He said that the wire from the starter to ground due to high voltage rots out internally, or somehow builds up a resistance. He mentioned this is common problem in honda cars. He took jumpers and bypassed the cable and then his car started. I'm wondering now if I might have the same problem. I'm not sure which wire it is. There is a red wire attached to the starter I think that might be important to check for connectivity. It's not in that diagram though.
It looks like it could be the white wire to ground maybe.

I did have honda techs look at it the first time this happened. It took a level 3 guy to finally say it was the starter. (After a level 2 and 1 looked at it.) (Starter was just put in by another mechanic so it was supposedly new (rebuilt)) I took it back and they supposedly replaced the starter again. (With a non rebuilt) The problem didn't happen for 6 months, this problem has now slowly began to happen at first once or twice, and now seems to happen most frequently after short trips, although 45 isn't short, and why it would work one time the second time I don't know.

Another theory is the starter has an engage mechanism that is in the wrong position, and just can't engage. It would have to disengage somehow, and then you can engage it? Is that right? Maybe that's why the multiple times trying to start its going slowly until it clears? Somehow I don't think it's the starter, because it starts sometimes without any problems.
SPONSORED LINKS
Was this
answer
helpful?
Yes
No
-1

KHLOW2008
I have the starting schematics here. 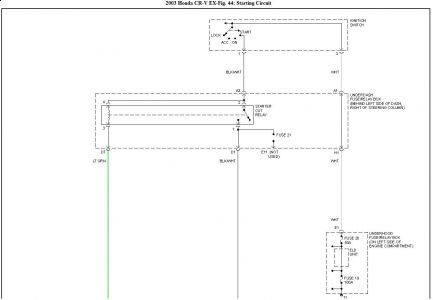 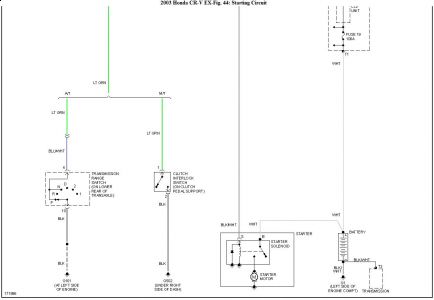 From your descrpition of the symptoms, it seems the starter solenoid is not getting any power interminttently. The most likely cause would be the igntion switch or the starter relay. Try swapping the starter relay to see if the problem continues.
Was this
answer
helpful?
Yes
No
+2

VITOVONANTWON
Hmmm, so I drove around again, and for a short time to my sons karate. The car didn't start after I turned it off, and normall when you put the key in the on position, (just before turning it all the way to crank it.)
I hear 2 clicks under the right dash area. Now when it didn't start, I didn't hear the 2 clicks. Does anyone know what part is under the dash near the glove compartment. Do you know where the starter relay is? Is this in the fuse box area in the engine compartment, or inside the cabin dash?

The weirder thing is, after just sitting there and turning the key on and off three times, the third time it started.

Still such an intermittent problem. I'm guessing with cold weather coming this will be less of an issue, but still, what a weird problem to have.

P.S. Thanks for the schematics, they are helpful.

Antonio
Was this
answer
helpful?
Yes
No
+3

Underdash there are a few relays and one of it is the starter cut relay. 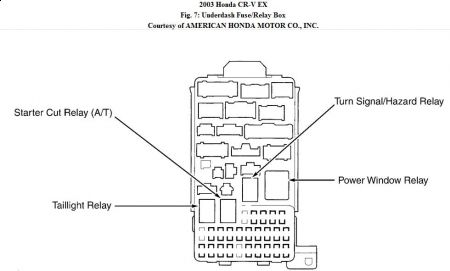 Not hersing the click means the starter cut relay is not working due to lack of power supply. I would suspect a faulty ignition switch, could be only the starter circuit if the switch is faulty. The recall was for a faulty switch that can cause intermittent failing of the switch at the ON position.

VITOVONANTWON
I checked on the honda dealership site,
I don't see the recall for the ignition relay anywhere.
Do you know where I can look, so I can call them up,
and maybe schedule for them to fix this.

Is there a way to test the relay?

Antoio.
Was this
answer
helpful?
Yes
No
+1

KHLOW2008
Relay testing can be done with tha aid of a DVOM, test lights and some wires. The easiest way would be to swap them with others.

I rechecked the safety recall for the igniton switch and it does not cover your vehicle.

Have you checked/replaced the ignition switch?
Was this
answer
helpful?
Yes
No
+4

JOHN AD CASTILLO
I was following the thread of conversations between Vito and Khlow about the starting problem of Cr-v 2003. I am experiencing the same problem with my Cr-v. How did you resolve the problem? The thread did not mentioned how it was resolved. Is it the starting relay or ignition switch which was replaced?
Was this
answer
helpful?
Yes
No
+2

KEN
It looks like it was the starter relay that was bad even though I still think it could be the starter. Check this guide which will confirm the issue.

MOLLYGIRL
Driving slowly, heard a "pop" sound and car stoped running. When I turn the key, it cranks, but won't kick over. Has a whirring sound. Was runnng great before this. Any ideas?
Was this
answer
helpful?
Yes
No

WRENCHER1
Sounds like you may have broken a timing belt. If you did, that could be serious issues to deal with on that engine.
Was this
answer
helpful?
Yes
No

i just changed the plugs, wires, rotor & cap and I can't get the thing to turn over. What is the proper way to test the coil.
Was this
answer
helpful?
Yes
No

The proper way is to test the primary and secondary resistance of the ignition coil
Was this
answer
helpful?
Yes
No

Knocking Sound When Driving Over Bumps And Uneven Road Surfaces. Had Wish Bone Replaced 8 Months Ago. Think The Problem Is The Rubber...
Asked by fredfensom ·
1 ANSWER
1997
HONDA CRV

I Was Driving Down The Road And Was Almost At My...

I Was Driving Down The Road And Was Almost At My Destination And My Car Dies. I Will Turn Over But Will Not Crank. The Timing Belt Looks...
Asked by Anonymous ·
1 ANSWER
1997
HONDA CRV

The Vehicle Is Demonstrating Loss Of Power Under A Load. Wondering If The Egr Is The Culprit
Asked by hazk(no)w ·
25 ANSWERS
2 IMAGES
2003
HONDA CRV

A Week Ago, The Engine Started To Have A Ticking Sound In The Engine. Took It To The Honda Dealer To Be Diagnose, They Can't Find Were...
Asked by si_junior ·
1 ANSWER
2003
HONDA CRV
VIEW MORE