SETH_SOUTHERLAND
I have recently been getting a check engine light and according to a scanner the error is a code 1456. Curiously, it also shows 1456 pd. Does that mean pending? If so, what does pending mean?

Anyway, my dad, my neighbor, and I have been doing various things to try to fix this problem. The very first thing that we noticed was that he could smell gas when he was standing by the driver's side door. We got to checking around and found that there was an oil leak between where the distributor cap fits onto the distributor. We then replaced the cap, the gasket that goes between the two, and then for good measure the o-ring that goes on the distributor itself. Replacing that also eliminated a knocking sound that we heard in what we believed to be the fuel filter.

After replacing those parts my car seemed to perk up a little which was great. We reset the check engine light with his scanner but after a couple of days the light came back on. I googled the error code and found that the problem was probably the gas cap, so I went to the local Honda place and bought an official Honda cap from them, put it on, and reset the light again. A couple of days later the light came on again. Even with the new cap, when I take it off I don't get that whoosh that you should get when you take it off due to the pressure buildup in the tank.

My question is: how do I check for what the problem could be if I'm getting the 1456 code and a new gas cap doesn't solve the problem?

One other thing I should mention is that when I ordered the part, I had to choose 2003 as the model of my car because their order form didn't have 2001 listed as an option. Did 2001 and 2003 Accords use the same exact cap? The new one didn't look exactly like my old one, but I didn't think that could necessarily mean that it wasn't a right one to use.

Seth
SPONSORED LINKS
Do you
have the same problem?
Yes
No

The pd means it is a pending (temporary) code. The code requires a 2 trip to set the MIL showing and from your symptom description, the 2 way valve is the cause.

The valve should be clogged with dirty gasoline and this would emit the gasoline smell.

Replacing it should solve the problem. 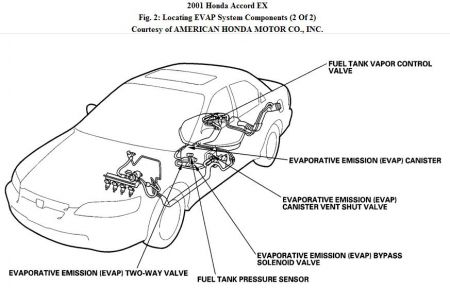 SETH_SOUTHERLAND
Is part #14 on this page the same two way valve that you are referring to?

KHLOW2008
I am unable to open the link so could not determine if that is the part. My database do not have the part listed so is unable to get the part number for you. 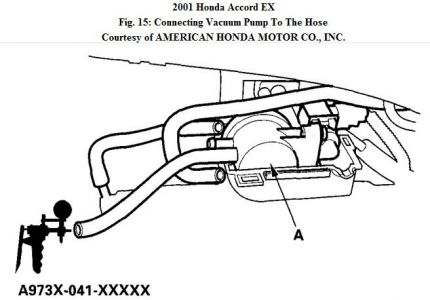 Hello I Had A Check Engine Light Come On This Past Year. When I Did The Reading, The Computer Code Said It Was The Throttle Body Sensor...
Asked by ectype ·
10 ANSWERS
1995
HONDA ACCORD

1999 Honda Accord Maintenace Req'd Light Will Not...

I Have Reset The Light Many Times Over The 96k Miles I Have Had This Car. This Is My 3rd Honda, And I Am No Stranger To It Probs But This...
Asked by turcman ·
4 ANSWERS
1999
HONDA ACCORD