My brother was driving my old truck last week and he said it was hesitating and the fastest he could go was forty five mph on his way home. I first went gas route. I changed fuel pump last month and changed filter. Vehicle starts up fine, but when you give it gas it shuts off. Changed all spark plugs and wires, found out later rear coil was not firing, bought new one and it is still not firing. It is the exhaust side. Followed wire and came to this sensor Called ICM, ignition control module. Could this be faulty? I guess I have to get on a computer to find out for 100% sure, But if this ICM goes, is this one of the characteristics? I know I see two other sensors I believe it a cam sensor and a crank sensor. But for the rear coil not to fire, if you had to make a good guess what do you think?
SPONSORED LINKS
Do you
have the same problem?
Yes
No

DAVE H
Are you getting fire from both coils when engine is running. You will only have one coil working during cranking? Right hand side coil?

Distributor-less ignition system (dis):
The DIS system, used on four cylinder engines, is a dual plug system consisting of a crankshaft-mounted dual Hall Effect sensor, two four tower DIS coil packs and a DIS ignition module.
The DIS eliminates distributor by using multiple coils, each of which simultaneously fires two paired spark plugs. The first time a pair of spark plugs is fired, one fires during compression stroke and other during exhaust stroke. The next time same pair of spark plugs is fired, the roles are reversed. Although spark in exhaust stroke is wasted, little of coil's energy is lost.

Two ignition coils are mounted together in a coil pack. Since there are two plugs per cylinder, two coil packs are required. The right coil pack operates continuously, whereas left coil pack may be switched on or off by ECA.

The ECA computes spark angle and dwell for ignition system. The crankshaft-mounted dual Hall Effect sensor is a dual digital output device, which responds to two rotating metallic shutters mounted on crankshaft. One output from hall effect sensor, Profile Ignition pick-up (PIP), is a fifty percent duty cycle signal, providing base spark timing information. The other output signal, cylinder Identification (CID) signal, is required for DIS module to know which coil to fire. CID is high (battery voltage) for half of crankshaft revolution (180 degrees) and low (zero volts) for other half of revolution.
The ECA determines spark output (SPOUT) by using PIP signal to establish base timing. The SPOUT signal is produced and sent by ECA to DIS module and serves two purposes: the leading edge of signal fires coil, and trailing edge of signal controls dwell on-time. This feature is called computer controlled dwell (CCD).
Another feature of system is Ignition diagnostic monitor (IDM). This is an output from DIS module to ECA which provides diagnostic information about ignition system for self-test.

Dual plug Inhibit (DPI), another system feature, allows ECA processor to switch ignition system from single-to-dual plug operation. During cranking, vehicle is in single plug mode: only plugs on right side of engine fire. When engine starts, ECA sends a command to DIS module to switch to dual plug operation.

If CID circuit fails, DIS module will randomly select one of two coils to fire. If hard starting results, turning key off and then cranking again will result in another random selection. Several attempts may be needed before DIS module selects proper coil, which will allow vehicle to start and be driven until repairs can be made.
The failure mode effects management (FMEM) system will keep vehicle drivable in event of an EEC-IV system or ignition failure, which would otherwise prevent spark angle or dwell commands. During FMEM, ECA opens SPOUT line and DIS module fires coils directly from PIP output. This results in a fixed spark angle of ten degrees and a fixed dwell.
SPONSORED LINKS
Was this
answer
helpful?
Yes
No
+3

TEMPTHACK02
When truck is running the front coil pack still runs. Which is the intake side. And The rear coil pack the exhaust side. Has no fire. Like I said earlier, it starts fine, idles fine but when you give it gas it shuts off. I will have diagnostic run on Monday. But off the top of your head what sensor does it sound like? I will make donation Friday. Wife has credit card but I promise I am a man of my word. IS ECA a sensor have not seen this or what else is it called? I see three sensors cam crank and cam. But like soon as I give it gas it has the fouled plug noise.
Was this
answer
helpful?
Yes
No
+4

DAVE H
If it was my car I would go for crank sensor, at the end of the day it is responsible for generating the spark output to the ECA. of course i would have the vehicle diagnosed first.

Electronic control assembly (ECA):
During system operation, ECA transmits electrical reference signals to engine sensors and analyzes return signals to determine engine operating conditions. See figure one. If a sensor or actuator fails, ECA initiates an alternative strategy, allowing vehicle to maintain driveability. This strategy is called failure mode effects management (FMEM).
The check engine light will illuminate and remain on whenever FMEM is in operation. The ECA, overriding failed component with a FMEM substitute operation value, continues to monitor failed sensor. Should signals from faulty sensor return to within operational limits, ECA will cancel FMEM and resume control based on sensor signals.
Explorer and Ranger, behind right kick panel. 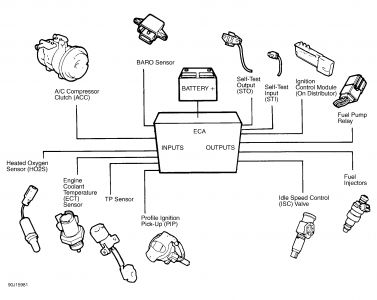 Was this
answer
helpful?
Yes
No
+8

I Have A 92 Ford Ranger I Rebuilt The Motor It Was Bored 20 Over Put It Back Together, The Rings Didn't Set So I Had To Redo The Rings...
Asked by bradley queen ·
1 ANSWER
1992
FORD RANGER

I Have Changed Fuel Pump. Filter. Distributer An Plug To Distributor. An Wires Still No Fire To Plugs
Asked by Pamelia ·
1 ANSWER
1995
FORD RANGER