MIKE2983
I was driving on the interstate yesterday, and as I was driving my heater stopped working in my car, causing cold air to blow through the vents. About 15 minutes later when I pulled off the interstate, my dash lights started to dim and so did my headlights, although the engine still seemed to be running fine for about 10 seconds after that. I then noticed white smoke coming from under the hood, and as I went to pull the car off the road the engine died.

Now today I picked my car up and added some coolant, hoping it was a simple hose leak. However, when I added the coolant, there are two leaks; one leak is underneath the engine (possibly a lower hose?), And the other leak appears to be near or under the engine block. So my question is, do I have a cracked block, or perhaps a bad head gasket? Or is there a hose there that could be leaking? I was able to get my car home by adding coolant about every mile, and the engine didn't seem to be idling rough or making any odd noises. Unfortunately the thermostat in the engine hasn't worked for a little while and I fear that may be what caused the problem to begin with.
SPONSORED LINKS
Do you
have the same problem?
Yes
No

JACOBANDNICKOLAS
Chances of a cracked block is slim. Has the car ever had white smoke coming from the exhaust? Also, you will need to check for the leaks. Spray the engine off with water and let it dry. Refill the coolant and start the engine. Check for hose leaks, freeze plug leaks, and coolant from the head gasket and intake gasket. If you still can't identify where it is coming from, go to the parts store and purchase a cooling system dye. Put it in with the coolant and go through the same process. The difference is this time you will check for leaks with a black light and the dye will glow helping you find where the leak is coming from.

Let me know if you have other questions, and thanks for using 2carpros. Com.

MIKE2983
Well it appears that my car actually does have a cracked block. I looked at the motor oil on the dipstick and it's very muddy looking. Also, when I poured water into the engine to check and see where the leak was, it appeared the leak was actually coming from the bottom of the engine itself, and not from a hose or from the water pump. :(
Was this
answer
helpful?
Yes
No

JACOBANDNICKOLAS
It could be a head gasket or a freeze plug. Is there anyway for you to lift the car (rack, ramps.)? If so, do that and have someone add coolant while you check for where the leak is coming from. If you see it, take a picture of it so I can look at it. I'm not saying the block is cracked, but chances are it isn't.

Please let me know what you find out with this.

MIKE2983
I can jack the car up, the problem is seeing exactly where the leak is coming from. It seems to be coming from somewhere behind the oil filter, but taking a picture of it isn't possible due to obstructions in front of the actual leak.

I can say that in addition to there being antifreeze in the oil, there was a small puddle of oil on the floor of the garage that formed after I managed to get my car parked in there. I don't know if this tells you anything or not, but I can tell you that the car has not been run at all while inside the garage.

If you have any suggestions of how I could get a better view of the leak, I'd love to hear them. As I said, the leak appears to be located at or near the bottom of the engine block behind the lower belt wheel and behind the oil filter.
Was this
answer
helpful?
Yes
No

JACOBANDNICKOLAS
As far as a better look, the only thing I can say is if you know someone that would put it on a rack to check it. Something tells me it is a head gasket. Believe me, I've been wrong before, but I just have a feeling on this one.
SPONSORED LINKS
Was this
answer
helpful?
Yes
No

Every Now And Then I Get Puffs Of White Smoke Coming Out Of My Tail Pipes. It Does Not Happen All The Time, Just Now And Then After The...
Asked by john jorgensen ·
1 ANSWER
2008
FORD MUSTANG

I Recentley Had Some Transmission Work Done. (Replaced Filter And Seals) But There Is Still A Cloud Of White Smoke That Comes Out Of My...
Asked by kiwis gt ·
3 ANSWERS
2000
FORD MUSTANG

Engine Mechanical Problem 1995 Ford Mustang V8 Two Wheel Drive Automatic Na Miles I Have A 95 Mustang With A Windsor And C4. It Is...
Asked by whitewindsor ·
3 ANSWERS
1995
FORD MUSTANG 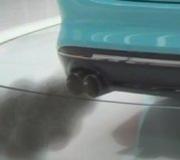