MAGICKALNAN
I am always repairing something and now my bushing are going out and my lower control arms have to be replaced at only 38,000 miles. How hard is to replace this part and can you find the parts cheaper than 350.00 a piece?
SPONSORED LINKS
Do you
have the same problem?
Yes
No

MERLIN2021
I show 75.00 including arm and bushings.I would say 38,000 on a lightweight car like yous is pretty lousy! If you have air tools and good jack it won't be too bad. Here are the instruction in the diagrams below. Check out the diagrams (Below). Please let us know if you need anything else to get the problem fixed.
Images (Click to enlarge)

MAGICKALNAN
Thank You for the help I am going to use the web sight
Was this
answer
helpful?
Yes
No

TDS5888
What size sockets/wrenches are needed to remove/replace lower control arm? 1/2" drive? Breaker bar?
Thanks
Was this
answer
helpful?
Yes
No

FREEMBA
"Rent" a set of 1/2" sockets from AutoZone (if you do not have a set of your own). Use a breaker bar to remove the bolt for the lower control arm. Use a wrench to hold the nut on the other side of the bolt during removal.
Was this
answer
helpful?
Yes
No
+3

PORIDNECK
Can remove the front horizontal bolt, only have access to the rear the nut side, I can turn the nut but wont be able to hold the head of the bolt or remove, it is enclosed in the frame.
SPONSORED LINKS
Was this
answer
helpful?
Yes
No

HMAC300
The only way to do this when that happens is to cut ahole to access it then reweld the frame back where hole was cut.
Was this
answer
helpful?
Yes
No
-1

PORIDNECK
Yes this is what I thought just wanted to make sure before imessed up, thanks for your help.
Was this
answer
helpful?
Yes
No

How do we get the bolt out, short of cutting a hole in the frame big enough to get a wrench in? 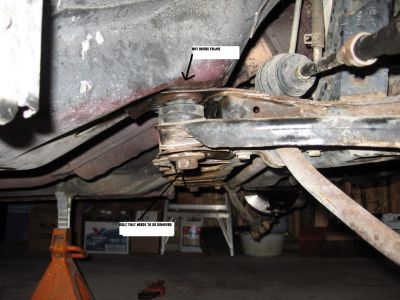 NEONCOREY
Did you ever get this fixed with out cutting the frame and what not?

I am changing the bushings currently and I am using a 1/2" torque wrench with a pipe for more leverage and I am 2 secs from snapping the bolt it feels. Both sides are just as tight. 1/2 inch air gun isn't touching it so we resorted to the pipe on the end of a torque wrench and got it about 1/4 of the way out but now I am hitting a wall as it is so tight I think it might snap the bolt.

There has to be a trick.I don't want it to snap and have to cut the frame and everything. Any help would be greatley appreciated.

Thanks Corey
Was this
answer
helpful?
Yes
No
-1

CARADIODOC
These nuts have a strip of metal spot welded to them to act as a wrench. That's what breaks loose and lets the nut spin. When you do manage to get the bolt part way out but then it gets tight it's because rust on the threads is getting inside the nut. Any professional would stop instantly, apply a spray lubricating grease, then run the bolt back in to bring the grease into the threads in the nut. Continuing to try to unscrew a bolt that gets tighter and tighter is just asking for disaster.

The trick is to reach inside the frame opening with a wire feed welder to tack the metal strap back onto the nut. As soon as that is done, you turn the bolt before the nut has had a chance to cool. As the nut cools and shrinks, the bolt will get harder to turn. At that point, you can reheat the nut with a small flame from an acetylene torch to expand it. Don't waste your time trying to do this with a propane torch. The flame is way too big, the temperature is too low, and you'll just make the nut mad!

THATKIDDEEJAAY
I am changing the control arms on my car, and I was putting things back together and I cannot get the lower rearward bolt in. (Front- Driver side, Rearward bushing)

Thank you!
Was this
answer
helpful?
Yes
No

WRENCHER1
Make sure the ball joint is not connected and the other bolt is loose. You need the arm to remain loose and free to get the holes to line up.
SPONSORED LINKS
Was this
answer
helpful?
Yes
No

THATKIDDEEJAAY
Yay! I will try that after I get off work. Thank you!
Was this
answer
helpful?
Yes
No

RENEE
Please let us know what you find so it can help others.
Was this
answer
helpful?
Yes
No
+1

WILDCOUNTRY1974
The bolt snapped any idea's how to get it out and replaced. It was comeing out easy I had to stop went back to it and the bolt snapped off on me. The car is in the wonderful northern states so it does have build up of rust.
Was this
answer
helpful?
Yes
No

CARADIODOC
If there's enough of the bolt shaft accessible, you can weld a nut to it with a wire-feed welder. I can describe how to make that work the best. If you can get above the cross member, you may be able to get in there with a sawzall with a metal cutting blade. Once the bolt is cut and you can remove the control arm, you should be able to slide the nut out on the metal strap it's attached to. If all else fails, take it to a body shop and have them cut it out with their plasma torch. A friend of mine has one, and I'm always amazed at what he can do with it.

Sorry about your climate. I'm in the middle of Wisconsin, and I really, REALLY hate winter.
Was this
answer
helpful?
Yes
No

STARJOPLAYER
What are the tools needed to fix the tie rod and control arm bushings?
Was this
answer
helpful?
Yes
No

need manual CHECK IT @
https://www.2carpros.com/kpages/auto_repair_manuals.htm
Was this
answer
helpful?
Yes
No

SKIMMYKAT
So I am taking off my control arm to replace the bushings, and My right side was a breeze. I got to the left side and I got the horizontal bolt off and I got the bolt off in the front under the brake roader(sp). Now on the back left bolt( Vertical Bolt) I am having trouble( I think because of the rust.) Now I got it out about 1/4 inch of the way and It was just stuck. So I grabbed a bar and used the leverage to help me out. While Pulling really hard I heard a cracking noise but the bolt didnt snap(so I think). My question for all of you is.(And by the way it looks like the bolt is going into the frame and I can not get to the other side of it by any means(I think)) So my question is. What is that bolt being threaded into? Is it being threaded into the frame or is there some kind of nut on the other side. Because I am wondering if I broke what is on the other side or did I strip it out? Because it is not moving any further than the 1/4 inch I got it out already. So feed back plz and every one!
Was this
answer
helpful?
Yes
No

CARADIODOC
The bolt goes into a separate nut that is hold from spinning by a metal strap welded to it. By forcing the bolt, that strap broke loose and either it will bend and spin or the metal tab will break off the nut. There is an opening in the cross member where you can spray a lubricant in onto the bolt threads. You might also be able to reach the flame from an acetylene torch in there to warm the nut and expand it. If the tab is bent and wants to spin, you might be able to bend it back and hold it with a vise grip pliers. Chrysler has three lubricants that might help. When the bolt is rusted tight, their Rust Penetrant will free up things in 20 minutes that would take WD-40 all weekend. It's even better than PB Blaster, but you must wash it off later. If you don't, it opens the way for moisture to sneak in and will make the parts rust worse than before. When the bolt is already turning in the nut, Spray White Lube keeps the threads free so the bolt can be removed. A liquid soaks into the threads and takes the grease with it. When the liquid evaporates, it leaves the grease behind. MP-50 is a very light weight oil similar to WD-40 but it lubricates more than dissolves rust. Since your bolt is still hard to turn, the metal tab is still attached. If you can't get a torch flame on the nut, the best chance of getting the bolt loose is the Rust Penetrant. Spray it wherever you can get it on the threads, wait for a half hour, then try to run the bolt back in. Once you get it back in, spray it with the Spray White Lube, then remove it. If it doesn't come out by hand don't force it because you don't want to risk breaking the tab. You can also run the bolt in and out repeatedly to grind away the rust.
Was this
answer
helpful?
Yes
No