When the problem began I didn't get so much as a click. There are no beeps, no sound of the engine turning over, just the spoiler deploying automatically. As long as I had the key turned the spoiler motor would lift the thing out, and it I didn't get the sound of a click until the spoiler had fully deployed. Even now when I try to turn on the car the spoiler LED in the center console flashes with the rest of the lights, except the spoiler button LED is the only light in the center console coming on.
As of right now when I try to turn on the car I hear a clicking and the lights flash. I can't tell if the lights are dimming because of a problem with filming over the plastic where my headlights are. I can barely see the lights normally. So I have a friend coming over to help me jump the car. If it jumps great. If not we won't try more the once out of concern for ruining the battery.
I believe this should be the starter but I can't find it. I don't know where or how to replace. I understand it should be on the drivers side and I have looked online for pictures but I don't know which brand of starter is the stock part.
SPONSORED LINKS
Do you
have the same problem?
Yes
No

RACEFAN966
Ok here is a pic of the starter and a pic of the location and how the bolts are holding it in so you can find it and remove it. It looks like it is on the passenger side not drivers. Let me know how it goes. 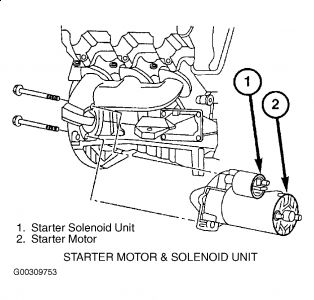 RACEFAN966
So how did it go?
Was this
answer
helpful?
Yes
No

2004 Chrysler Crossfire Car Will Not Start

My Car Will Not Start When I Place The Key In The Ignition And The Alarm Goes Off, I Have Already Replaced The Batteries In The Key
Asked by jenn8168 ·
1 ANSWER
2004
CHRYSLER CROSSFIRE

GUIDE
Not Starting
We are a team of ASE certified mechanics that have created this guide to help you get back on the road, please use gloves and safety eyewear before you begin. We have listed...

2004 Chrysler Crossfire Car Will Not Start

I Went To The Store Came Out Put The Key In And Nothing, The Radio, Windows, Lights Work Fine But Would Not Even Make A Sound From The...
Asked by roboticsoforegon@gmail.co ·
4 ANSWERS
2004
CHRYSLER CROSSFIRE

Yesterday My Car Drove Fine. Today My Car Won't Start. When I First Tried Starting The Car I Didn't Get The Sound Of The Car Turning Over...
Asked by Brandon09 ·
5 ANSWERS
2004
CHRYSLER CROSSFIRE

Crossfire Does Not Start Or Stops During Drive

My Crossfire Does Not Start From Time To Time. It Does Not Crank But Just Klicks. It Takes Exactly 1 Hour Until It Starts Again. It Seems As...
Asked by Dine ·
3 ANSWERS
2004
CHRYSLER CROSSFIRE