Can you give me the code number that is set in the system?

The gas cap light will come on when there is a big leak in the evap system itself.

You would need to smoke test the system to determine the failure.

AL514
Hello, the reason this light comes on in the first place is that the ECM (the cars computer) has run a self-test and found a large leak in the Evaporative Emission System (Evap).
This system allows the fumes from the gas tank to be taken into the intake manifold in a regulated amount and burn with the fuel in the cylinders. So it may not be the gas cap that's having the issue. It can be any of the Evap systems components from the gas tank, or the vent valve (which opens to atmosphere to allow you to fill your gas tank and also to help with purging the fumes).

It can be the Purge Valve itself (which is the actual valve that takes the fumes from the gas tank into the intake manifold). Or it can be a number of different vent lines coming from the gas tank, the Evap Canister (which stores the fumes). So you see its a pretty big system. The reason its not setting a code for the Evap system itself, is that this leak is a very large leak, so the ECM assumes its the gas cap since that's the largest opening in the system.

If you open the hood, since this is such a large leak, you may be able to find a broken hose or one that came disconnected due to engine vibrations. Evap leaks can sometimes be very hard to find though as well.
Sometimes a technician will have to use a leak detector, or a smoke machine to find these type of leaks.
Pressure testing at 1 psi is also an option.
I personally use a smoke machine to find these leaks, even then they can be very hard to find,. But that's what's happening.
Doing a visual inspection under the hood is all you can really do if you haven't gone through this experience before,
Here is a guide with a video to help you if you want to try to find the leak.

https://www.2carpros.com/articles/evap-system-code-repair
Was this
answer
helpful?
Yes
No
+2

Check Engine Light Came On The Same Day The Remote...

The Remote Starter Stopped Working On My 2006 Buick Lucerne. The Lights Flash, But The Car Doesn't Start. I've Changed The Battery In The...
Asked by steven2001 ·
2 ANSWERS
3 IMAGES
2006
BUICK LUCERNE

My Check Engine Light Is Flashing And Stabilitrak...

Everytime The Car Switches Gears The Service Stablilitrak Comes On. The Engine Light Is Flashing And The Car Jumps Everytime The Car...
Asked by zspence3 ·
1 ANSWER
1 IMAGE
2006
BUICK LUCERNE

Service Airbag Light Came On What Could Be The Cause?
Asked by Anonymous ·
1 ANSWER
2007
BUICK LUCERNE

At 24500 Miles The Engine Light Came On. I Have No Problems With The Car, The Engine Performs Fine. Is This An Automatic Mileage Sensor?
Asked by ChrisL ·
1 ANSWER
2007
BUICK LUCERNE
VIEW MORE 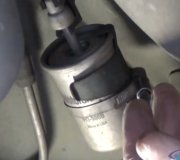