Ive only had the car about 3-4 months.
we don't drive it often or far (basically just school and back)
it was fine for about a month but then one day in traffic, it over heated bad. all fluid was lost and we had to get it towed to the mechanic.
he said the radiator was cracked and needed to be replaced (he also replaced our front brakes and front brake sensors).
the "check coolant level" message would come on sometimes. most of the times we checked, the level was fine but occasionally, it was low so we would add some and the message would go away.
it was running fine for about two weeks until we noticed it started to over heat again.
i had my friend come look at it a few days after that but as much as he drove it around, we couldn't get it to over heat.
we realized it must be the Thermostat is going out which explains it over heating sometimes and not all the time.
I didn't want to take it back to the same mechanic because he had put the radiator in incorrectly which bent the fan.
my bf and room mate fixed the fan and replaced the radiator themselves.
the cars check coolant level came on but they just "burped" the air bubbles out of it and it was fine after that... for about a week.
once or twice we noticed when we we at a stop sign or red light, the car would start to shake/vibrate.
the brake light had come on, i figured we need to replace our back brakes and maybe that could cause the car to shake when stopped.
(we haven't been able to replace them yet because we've had school expenses and i haven't found a mechanic around here that i trust yet.)
we tried to not drive the car after that, but a few days later, we needed to get to school and had absolutely no other ride.
its not far (about 2 miles) but the whole way there and back, it was idling very low and whenever we came to a stop, we had to rev the engine so it wouldn't stall out.
That was on August 17th. After that, we didn't try to drive it at all but haven't been able to take it to a mechanic yet either.
yesterday morning (the 24th) my bf had to get to class and couldn't find a ride so we decided to try the car again.
It would hardly even turn on. it sounded horrible like clunking, popping, rattling. and stalling out. HAGERTP
The problem sounds as if there may be some diagnostic work that you either need to do or have done. The cooling system needs to be pressure tested to see if there is coolant going into the combustion chambers. If it is indeed going into the engine, it is very possible the cylinder head casting has cracked, which can and does happen when over heating occurs. Let me know how this turns out and we can continue with this diagnostic process, does this seem like a reasonable course of action?
SPONSORED LINKS
Was this
answer
helpful?
Yes
No

JDGKS
Thank you for the advice!

I forgot to mention earlier that we had also added some oil last week because I read that low oil could cause the low idling and shaking, but I guess that wasn't the problem considering the car wont even start now.

When my room mate gets home I will ask him if he has the proper equipment to test the pressure and ill let you know how it goes.
I was also told it could be a loose Vacuum Hose. So I will try to check that too.
Just need to do some research first to figure out where everything's located under the hood.
Was this
answer
helpful?
Yes
No

HAGERTP
It could be a vacuum leak, I always like to rule out the little stuff before it escalates into the BIG STUFF. Keep in touch and I will keep my fingers crossed for your car Ă
Was this
answer
helpful?
Yes
No 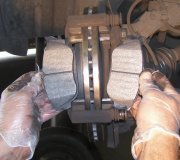