HAILEEGRACE12
I have an airbag that will not hold air. Was going to get a conversion kit from air to coils but when I jacked it up and looked around, I saw the shocks and thought; why not just put some bigger and beefier air shocks in place of these. Run my airline down the frame to the back and just disconnect the old airbags and leave them for now. So everywhere I tried keeps telling me they don't offer air shocks for my car. How can I find some good air shocks to fit in place of the original ones and has this ever been done?
SPONSORED LINKS
Do you
have the same problem?
Yes
No

Even if you found air shocks, they will not work as that is not there job.

Why not just replace the failed airbag? It is an easy replacement and the bags are cheaper than trying your air shocks or the conversion.

HAILEEGRACE12
Yea you're right. I thought about it all night and that was the most logical answer I could come up with. Can I just buy 1 or do they only come in pairs?Is there a way to patch one?
Was this
answer
helpful?
Yes
No

ASEMASTER6371
No patching. Yes. You can buy just 1. Check with rockauto. Com.

HAILEEGRACE12
Thanks I ordered it. Just went ahead and got a pair. Figured it would be foolish to have it up on jack stands and only doing one side. I have read somewhere that I need to replace an air dryer? But also heard that it really doesn't matter. Is this something I should look into or will I be okay just replacing the airbags?
SPONSORED LINKS
Was this
answer
helpful?
Yes
No

My towncar the air ride has gone out on it before but all that had to be done was to change the fuse. It went out again and everytime I change the fuse it blows. When I put the new fuse in and I start the car I here a click nosie like the compersor is trying to start but I think the compressor is shorting out. Can you tell me where the compressor is and if there is anything else you can think it might be. Thanks
Was this
answer
helpful?
Yes
No

MERLIN2021
The system should be scanned for error codes, the connector is in the trunk here are the locations of the components... 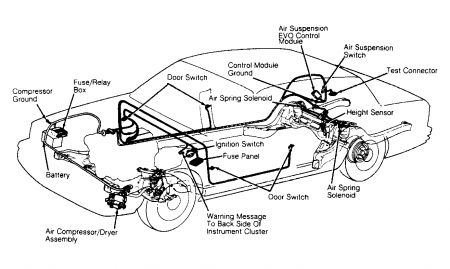 My rear air suspention went out and I would like to fix it myself were do I start and could I put regular shocks insted of air ride shocks on it how do I check to see if my shocks are holding air of if there is a leek in a line
Was this
answer
helpful?
Yes
No

BILLYMAC
Is your pump working?
Disconnect ground on batt for a cpl mins
this system can be diagnosed but first the pump must run check these things get back to us thanks billymac
Was this
answer
helpful?
Yes
No

There are 5 basic steps to removing and replacing the air springs.

Raise the rear wheels off the ground and remove the wheels
Pop the clips to the air bag and solenoid valve
Pop the air bag from the axle
Disconnect the valve from the air bag and remove the old air bag
Replace the air bag and reconnect everything and test.
This document goes into detail so it seems harder than it is. There is a lot more detail to this than what I have described above, so please read through the document before starting. Take your time, observe what you are doing and enjoy! Good luck! I apologize beforehand for loosely using the words 'air bag', 'air suspension' and 'air shock' interchangeably throughout the document.

Tools You Will Need 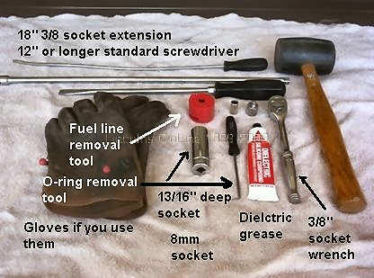 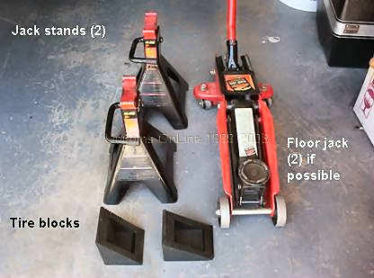 Let's Get Started
Turn the air suspension off. It is located on the right wall of the trunk. 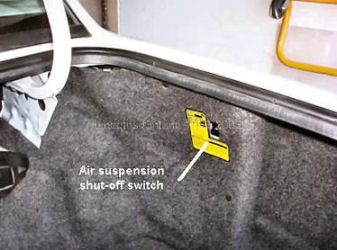 Place wheel blocks under one front wheel (front and back of wheel). 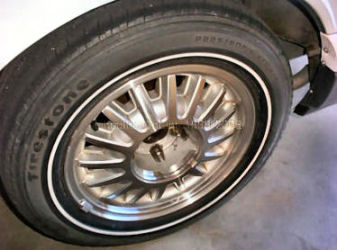 Pop the hubcaps off and loosen the lug nuts. Jack up both sides of the rear of the car until the wheels are off the ground.

Secure the car with jack stands, lower the car onto the jack stands just enough so that the stands hold the car and the wheels are off the ground.

Remove the lug nuts and wheels.

Working one side at a time:
Turn the air bag clip so the loop end is facing you. Pop the retainer clip off of the top of the air spring with a *long screwdriver placed between the area of the frame and the body. By using force to push it away from the air shock, it will slide off. 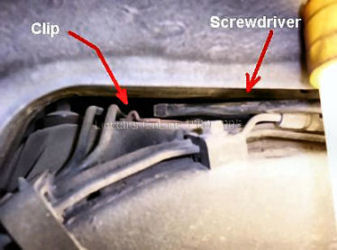 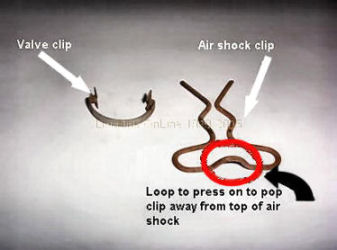 *You could also use something that will grip or hook to the loop of the clip and pull it out from the air suspension.
Place a *long skinny screwdriver to the top of the valve and pop off the retainer clip that holds the valve in place on the valve socket.

*You can also use something that is long and stiff like a screwdriver that can be used to press up on the valve clip.
From under the car, * disconnect the solenoid valve by turning the valve counter-clockwise once, pull until it stops, turn counter-clockwise again and pull it out and away. Lower the valve down so you can access it. 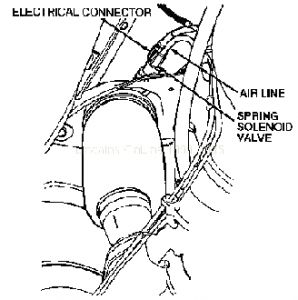 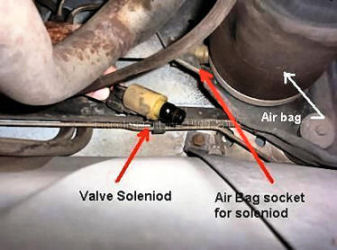 *If it makes it easier, the heat shield can be removed with a long extension and an 8mm socket. The shield has a small lip holding it to its mount. You will need to lift up and out to release it.
While holding the valve with one hand, disconnect the electrical connection to the valve by using a long screwdriver or similar device with the other hand to wedge open the locking clips out enough to pull the connector off with your hand. Be careful not to push them out too far or hard, they will break off. You might be able to use both hands to pull the two apart. 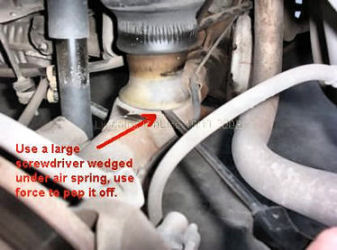 Pull the air bag down and towards the center of the car. When it is out of the mount and at a horizontal position, pull out towards you and remove it from the car. 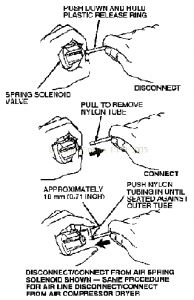 Reach in and pull the valve and air line through the same hole the air suspension valve connection goes through. 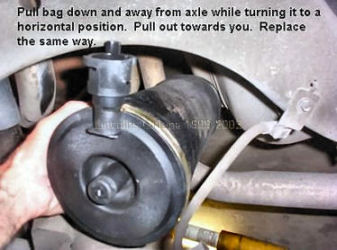 Holding the valve in one hand, use the other hand to push the air line into the valve, then using a device (or your fingers) such as a fuel line removal tool, put pressure on the orange ring while pulling on the air line. It should pull right out. Inspect the air line for damage.

Inspect the valve for damage. 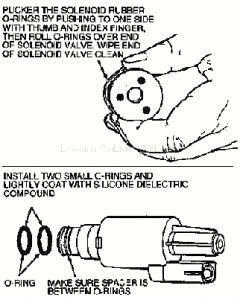 Use a small hook tool (awl) to remove the o-rings. Clean off the valve, spread dielectric silicon grease around the area of the valve where the new o-rings go. Replace the o-rings with the new ones as shown. Set the valve aside.
Place the new large o-ring into the NEW air bag connector for the valve.

If the valve won't go all the way in to the second o-ring, you can place a 13/16" deep socket over the air line shaft and GENTLY tap the valve into place with a rubber hammer.

BE VERY CAREFUL AS THE VALVE COULD GET DAMAGED!!!
Press the valve retainer clip over the connector of the air suspension. This keeps the valve in place. 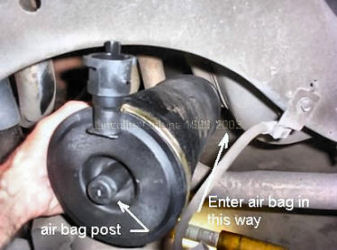 Place the valve clip over the top of the air suspension post.

From under the car, reconnect the electrical connection to the valve.

Do the other air spring the same as above.

CHECK FOR LEAKS! Put your ear to the area of the wheel and wheel well and listen for leaks. Do both sides.
Was this
answer
helpful?
Yes
No

WADDISON
My 90 lincoln was jacked up to put brakes on with out turning the pump off. The air suspension lights comes on and the back is lowering itself. Is there a check I can do are a correction or reset.
SPONSORED LINKS
Was this
answer
helpful?
Yes
No

GREENEYES61958
Hi there, there should be a suspension reset in the trunk, on the left side wass, it might have a yellow tag around it, have a nice day
Was this
answer
helpful?
Yes
No

help. My car is almost sitting on the ground there is about4 inches between the two I already replaced air bags and shocks in the rear I dont know what else it cound be and I dont have the mony to take it to the dealer or the money to have it towed there because im afraid to drive it as I dont want to mess it up more. I dont have alot of anything and this is how I get my kids around I have also replaced the relay that is under hood
Was this
answer
helpful?
Yes
No

MERLIN2021
Check the height sensor, it attaches to the rear axle on the drivers side, I think! The ball end slips out of the axle mount. For saftey sake turn trhe switch off in the trunk, jack car up place stand under the car's frame do the work. Place car back on the ground, turn the switch back on, then start the car to raise the back.
Was this
answer
helpful?
Yes
No

DEVON 443
How would you check the hight sencer to know if its bad(1990 lin. Town car
Was this
answer
helpful?
Yes
No

MERLIN2021
I didnt say the sensor was bad, I said look for the sensor arm being detached from the axle! Only way to tell about air suspension codes is with a scan tool like Fords NGS tool to scan the codes, we are talking about a visible check, also does the compressor run? It wont if this arm is not hooked up!
Was this
answer
helpful?
Yes
No

DEVON 443
Do you have a pic of this particular mode of height sensor as I cant find one online and I am having a hard time locating in in the rear driver side axal. And im not shure how you tell if the compresser is running althuogh I have located that and the dryer. Today the air bags are deflated
Was this
answer
helpful?
Yes
No

MERLIN2021
Ok this is from a 92 that's as far back as I have catalogs for, but it should be the same, your, if it is the same will be on the left(drivers) upper arm, this is what I have for a photo. 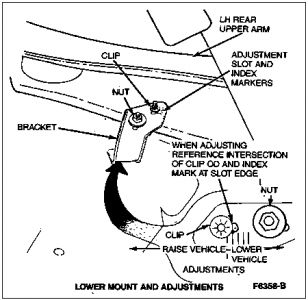 GREENEYES61958
Hi there I have the same car and there is a suspension reset in the trunk on the left hansd side wall, it might have a yellow tag around it, I hope this helps, take care
Was this
answer
helpful?
Yes
No

I Have Rented The Ball Joint Remover And Used A 3 Foot Pipe On A Breaker Bar And I Can Not Get The Old Ball Joint To Move At All. Will...
Asked by pete tetley ·
4 ANSWERS
1995
LINCOLN TOWN CAR

In The Last Three Months, I Have Had The Bearing Go On The Driver Side Front Twice. It Sounds Like It May Be A Problem Again. I Am...
Asked by bosco133 ·
3 ANSWERS
1997
LINCOLN TOWN CAR

Is There Some Type Of Pin In The Back Of The Hub That Is Keeping The Ball Joint From Coming Out And Does It Take A Special Tool To Get This...
Asked by grippjl1 ·
1 ANSWER
1996
LINCOLN TOWN CAR

I Am Trying To Lower The Back Of My Air Suspensions. Is There A Way I Can Drop Down My Back Rear?
Asked by Salaizjr84 ·
1 ANSWER
2000
LINCOLN TOWN CAR
VIEW MORE