WILDWES01
While driving vehicle shut off and oil dipstick was pushed out. Now when key is turned to crank, fuel pump turns on and crankshaft turns, but not normal cranking sound. Sound is like a steady hum instead of "crank crank crank" noise. Lol, hard to explain. Accessory belts turn so I know crankshaft is turning, so I know starter is good and engine not locked up. Thinking it could've been timing belt, I removed upper timing cover to reveal tensioner and camshaft sprocket. All appeared to be in good condition. Manually rotated engine with crankshaft bolt and saw timing belt and camshaft sprocket rotate. Please help.
SPONSORED LINKS
Do you
have the same problem?
Yes
No

If the starter sounds differently and it is a steady crank, chances are the timing belt jumped time. Is it possible for you to record the engine cranking so I can hear it?

Also, an easy way to determine if timing is off is to check compression. Low compression (which is what I think is happening) will indicate the timing is the issue.

Again, if you could upload it cranking, it will tell me a lot by listening to it. I hate to have to add this, but if the timing jumped, it may have caused major internal engine damage. All Hyundai engine are interference engines. What that means is there isn't enough clearance between the top of the pistons and the valves. In the event of the timing being off, they will hit and cause damage to the engine valves. That may be why the starter sounds different. If the valves are bent, they won't close resulting in no compression.

Thanks for helping me out with this issue. I have uploaded a video as you requested. I hope it helps. I am familiar with interference engines and the possibility of internal damage, so it's definitely a concern. As you can see in the video, the timing belt isn't broken and appears to be in good condition. The teeth of the belt appear good also. I have a compression test gauge kit so I am going to perform the test and record the results for each cylinder. I will share the results with you when I'm finished and you can tell me what you think. 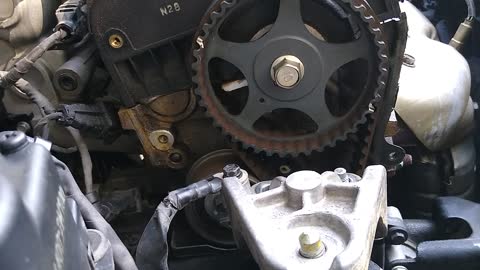 You have no compression. Interestingly, if you watch the video, the cam gear turns a bit after the cranking stops and delays to start moving when you first engage the starter. Something is broken. There should be absolutely no delay.

Now, an interference engine will cause damage to the valves if the timing is off. I suspect that although the timing belt is still attached, it either jumped time causing internal damage or the way the cam gear has delayed movement when you first crank and then a delayed stop when you release the starter, the camshaft is broken or the shear key on the crankshaft timing gear is bad Something happened there.

If you want, you can do a compression test to confirm what I'm saying. But just based on the sound, it has no or very little compression.

Again, based on the way there is a delayed start and stop, I have a feeling the shear key on the bottom timing gear (crankshaft) has sheared. Do me a favor. see if you can move the cam gear left and right easily. Keep in mind, if nothing is broken, the crank pulley should move exactly at the same time without play and you really shouldn't be able to do it by hand because you will be turning the engine engine. Try it and let me know.

One other thing, if the timing belt crank gear has sheared the key, that small amount of movement will most likely not turn the belt driven accessories until it gets tight again.

I attached two pics. First, is the timing belt so you can see there really isn't much to it. You will see the crank and cam pulleys and the tensioner. If the cam gear moves at all, the crank pulley should to. That doesn't appear to be what is happening.

The second pic shows the shear key that the crankshaft timing gear goes over. That is what I think broke.

Check that and let me know what you find. Also, if I am correct, it may be cheaper to purchase a good used engine rather than trying to repair this one. Watch your video and you will see what I mean. Once you see it, I think you will agree that the shear pin broke or even the camshaft is broken.

2008 Hyundai Elantra Cranks Over But Does Not Start...

I Was Driving Down The Road And The Engine Started A Tapping Sound. It Got Louder When I Pushed On The Gas. At A Store, My Brother...
Asked by caroline1130 ·
3 ANSWERS
41 IMAGES
2006
HYUNDAI ELANTRA

2005 Engine Turns Over But Wont Start

Car Will Not Turn Over. It Tries But It Will Not Catch. That Tells Me The Battery Is Probably Good. I Can Hear The Fuel Pump Priming. I...
Asked by Reaver812 ·
1 ANSWER
1 IMAGE
2004
HYUNDAI ELANTRA
VIEW MORE