SHAINA.MARIE
I have a 2003 Mazda Protege 5. Every time I start it up after about 6-8 hours, blue smoke comes out the exhaust. It burns through about 2 quarts of oil a week. We have replaced the PCV valve twice, put on a whole new head with all new valve seals and everything, new spark plugs, new head gasket, and checked the compression of piston rings. Compression is fine. We found that oil was in the PCV valve and draining into the intake manifold. Took out spark plugs and took a flashlight to look down the cylinders. There is a pool of oil on top the pistons in each of the 4 cylinders. Please help! What else could it be?

Well we replaced the valve seals and the head gasket. We did a compression test for the rings and they are all fine and bought a brand new head. Even after replacing all of that it still burns oil. So it sounds like it must be a cracked block.

Love this site :-)
SPONSORED LINKS
Do you
have the same problem?
Yes
No

SHAINA.MARIE
How much would the block typically cost? How much labor are we talking to replace the it?
SPONSORED LINKS
Was this
answer
helpful?
Yes
No

RIVERMIKERAT
I couldn't tell you. It varies by area, age, mileage, and displacement.

Your best bet is to find a used complete motor or block, long or short. Since you have a new head already, I would go with the short block, which doesn't come with the head.
Was this
answer
helpful?
Yes
No

SHAINA.MARIE
I know some of the symptoms of a cracked block and we don't seem to have any of those symptoms of than the smoke from the exhaust. The antifreeze is clean (no oil in it) and on the contrary the oil does not look milky like it would if there were antifreeze in it. The engine is running fine and is not overheating. Is there still a possibility it's a cracked block even with the absence of those symptoms?
Was this
answer
helpful?
Yes
No

RIVERMIKERAT
Yes. Oil galleries run alongside the cylinder bores. A crack between the gallery and bore wouldn't mix oil and water.
SPONSORED LINKS
Was this
answer
helpful?
Yes
No

SHAINA.MARIE
Okay. I will look into that. Thank you very much for your help!
Was this
answer
helpful?
Yes
No

JEPPERSON
I have this same issue with my 02 Protégé5. It seems to be a very common problem in this vehicle, but I have yet to hear a fix other than change valve seals, head gasket, piston rings or get a new motor. One thing that I have noticed in my cars is if I start the car in park after 6 to 8hrs it will smoke about 5 seconds after start up when the idle goes down. If I start the car and immediately put it into R or D before the idle goes down and leave it there for about 20 sec than put it into park, I will have zero smoke every time. I can not explain why it will smoke in park, but in gear I will not get smoke. I know this is an old thread but if someone has figured out a fix I would love to hear it.
Was this
answer
helpful?
Yes
No
+1

This problem is probably due to the oil control rings not working correctly due to a design flaw, oil level level overfilled or oil drain back holes in the cylinder head are blocked somehow.

MAKATON
My 97, 1.5 litre Mazda Protege sends out a large cloud of blue smoke when I start the engine in the mornings after a cold night (below 50 deg F). Everything is fine afterwards, and there is no smoke when the car warms up. I've had tune-ups, replaced O2 sensors and catalytic converter even the engine at one point but still can't get rid of this problem. When the weather is warm there's no problem and the car runs well. The mileage is fine and there's no hesitation. My car has 150000 miles on it but the replacement engine only around 60000. Can anybody help me with this problem? Although, it's environmentally bad and quite embarrassing I'd like to keep my investment as long as I can.
Was this
answer
helpful?
Yes
No
-1

NIKOLAYRI
Hi, I also have exactly the same problem. It looks like the valve stem seals are the problem, but the logic shows that it can be something else. I also want an answer to this.
We will have to try this:
before the start in the cold morning, take out the spark plugs - check if there is oil on one or all of them - if yes - valve stem seals - if no - piston rings (oil rings stuck)
Was this
answer
helpful?
Yes
No

NIKOLAYRI
I had my valve stem seals replaced and the smoke is still there, no change whatsoever. It must be the piston rings then.
Was this
answer
helpful?
Yes
No

AIRCRAFT ENGINEER
Odm2 shows P0300 and hesitates on acceleration
lots of blue smoke on start up after car has been siting problem is every day
oil changes regular with 10w40 is that wrong
bought valve seals and would like to do a compresion check first
would appreciate advice
victor
SPONSORED LINKS
Was this
answer
helpful?
Yes
No

If you are seeing a lot of blue smoke on start up, it sounds like valve seals (if the smoke stops). If it doesn't, it could be rings. I would recommend doing a compression test before putting money into the engine.

As far as the PO300, that is a random misfire. It could be caused by the need of a tune up or many other things. Compression can also be the cause. Check that first.

WENDELL123
I have a 1993 mazda protege 1.8 liter single overhead my car some times puts out blue smoke out of the tail pipe that I can see on accelerating want could be the problem it only does after the cars warmed up.
Was this
answer
helpful?
Yes
No

SATURNTECH9
If it only does it when its warmed then most likely it's worn or sticking oil ring's. If it did it on start up then I would say valve stem seals.
Was this
answer
helpful?
Yes
No
-1

CLIFFORD NELSON
When starting the car blue smoke comes out pretty heavy and lightens up in a few minutes. I check all fluids and oil was two quarts low. Just had engine replaced with a used motor. He had cylinders polished and heads cleaned. So what are my options?
Was this
answer
helpful?
Yes
No

CARADIODOC
If the smoking stops after a minute or two, it is most likely caused by oil running down past the valve guide seals when the engine is stopped. Those seals were pretty easy to replace on older domestic engines, but today, especially with import engines, the valves are real deep in the heads and special tools are needed. Some are almost impossible to do without removing the heads from the engine.

Also, if there is a lot of sludge in the engine, the oil drain-back holes could be plugged. That will cause oil to collect up there where it will be much easier for it to leak past the valve guide seals. If this is what is happening, the problem will gradually clear up after a few oil changes at the recommended intervals. The additives wear out, and each oil change introduces new detergents and seal conditioners.

The clue to plugged drain-back holes is the oil level will be considerably higher fifteen minutes after checking it right after stopping the engine.
Was this
answer
helpful?
Yes
No

After Filling Up Car Stalled, Engine Light Come On... 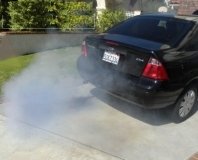 Hello! I Have A '00 Mazda Protege. It Has Started To Billow White Smoke Out Of The Exhaust Pipe When I Start My Car. When I Start It The...
Asked by mia ·
3 ANSWERS
MAZDA PROTEGE

The Check Engine Light Came On And I Look Under The Car The Converter Firery Red Hot. So I Put A Brand New One On. And Weeks Time The New...
Asked by cannonball74 ·
1 ANSWER
2002
MAZDA PROTEGE 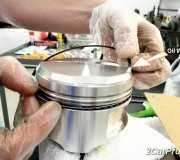