FRANK LAIACONA
I have a 2003 s-10 pickup with a vacuum leak and am looking for a piping diagram so I can replace bad vacuum lines
Do you
have the same problem?
Yes
No

JACOBANDNICKOLAS
Here are two that I was able to find regarding the vacuum lines. Both are for the 4.3L V6. The 3rd one is for the HVAC system. NOTE: These are general diagrams from GM. If you have a different routing diagram under the hood, follow it, but I will assume you don't have that.

If there is something specific or a specific area that you need, let me know. Also, (I don't know if this helps) but you should have around 12psi vacuum at the intake at an idle. If that is low, you have a leak. If you maintain that and still feel you have a problem, don't look for disconnected or broken hoses, but rather, look for kinked or collapsed hoses.

Let me know what you find and if this helps. (CHECK THE IMAGES BELOW)

SPONSORED LINKS
Was this
answer
helpful?
Yes
No
+8

COLEMAN9702
4.3 vacuum diagram please
Was this
answer
helpful?
Yes
No
+2

Here is the vacuum line routing diagrams you have requested. Check out the diagrams (Below). Please let us know if you need anything else to get the problem fixed.
Images (Click to enlarge)

GRAMPA JAKE
I put a 350 into my s-10 replacing the 4.3L. I eliminated the AC. Now I have no vacuum at the heat/defrost control. Looking at the schematics on your web site most lines are hooked up to a canister. I don't recall the old setup ever having one. Do I just need to run one of the lines to the front of the carburetor or where would I get a vacuum source? All the lines on the control are colored and I assume one of them is the main feed, correct? If not, is there a main feed? Thanks for your help.
Was this
answer
helpful?
Yes
No
+1

Yes, you will need to bring vacuum in from a source, probably through the firewall. I have included the vacuum diagram for your vehicle and original engine in the diagrams down below. Please let us know if there is anything else we can help you with.

HOME1250
I just bought a 2000 s10. It needs some TLC, but I bought it right.
There is a vacuum line just "hanging" back behind and to the left of the ABS unit. There is also a connector just "hanging" there also. I can find no place to hook either of them up.
I carried the truck for a state inspection this AM, and it failed because some items were "not ready". I am wondering if this is caused by the vacuum and electrical lines that are not hooked up.
Is this possibly part of the vapor cannister unit?
The electrical line can't be stretched very far, and there are no empty connectors with the length of the wires.
Any ideas will greatly appreciated.
Thanks,
Jim
Was this
answer
helpful?
Yes
No

DOCFIXIT
Hi
Is there vacuum on the hose? Possible vacuum for HVAC does it work?
What color are wires? And iis it a terminal connector/
Also why did truck fail? Emissions? Brakes? Exhaust?
Let me know
Was this
answer
helpful?
Yes
No
+2

HOME1250
The vacuum hose comes from the throttle body and goes over behind the ABS and goes through what is apparently a check valve and then T's off. One branch is just hanging there and the other appears to go down and toward the rear of the truck. There IS vacuum on the line.
I found that the electrical connector is supposed to hook up to the ABS. It connects to a Kelsey-Hayes unit. But when I plug it in, the Kelsey-Hayes unit has a motor that begins running. I let it run for a couple of minutes to see if it would "equalize" and turn off, but it did not. The ABS light is on with or without the connector plugged in. Will this affect the state inspection which is basically emissions.
The catalytic converter was plugged when I got the truck. I have had it replaced.
When I carried the truck to be inspected, there were no codes, but the technician said that the state computer said that some items were "not ready". He could not, or would not tell me any more. He said that it usually needed driving (a couple of hundred miles was what he suggested). I have since picked up a code that says it has a #1 misfire. Plugs, wires and maybe a coil pack would probably help that.
Any ideas on the loose vacuum line and the ABS problem?
Thanks,
Jim
Was this
answer
helpful?
Yes
No
+1

DOCFIXIT
Look in the fender well to see if there is a round plastic ball... this is a vacuum reservoir and it is most likely where your other line hooks up to. It keeps the vents from going to defrost when you are hard on the throttle.

The ABS unit will need the control unit that is bolted to the top replaced.... this is where the main power relay is and it sounds like that one is stuck in the on position, common problem

Here is a guide on replacing the ABS control module

Here is another one pertaining to the vacuum issue mentioned previously

I am replacing the vacuum hoses that run from my transmission to somewhere else. There are 3 of them and I don't know where they hook up. Is there a diagram that can help me?
Was this
answer
helpful?
Yes
No
+1

https://www.2carpros.com/articles/mitchell1eautorepair-car-repair-manuals
Was this
answer
helpful?
Yes
No
-1

PHANTOM531
I need to replace crummbling vaccum hoses, but I can't tell where they all go. I need a diagram of all the placements.
SPONSORED LINKS
Was this
answer
helpful?
Yes
No

RASMATAZ
Here are the vacuum line diagrams you needed. Please let us know if you need anything else. 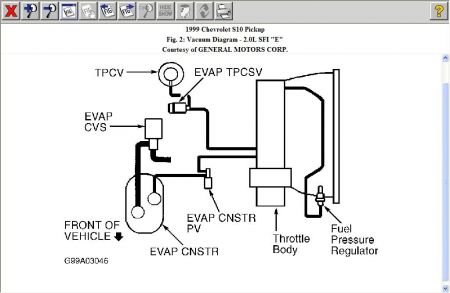 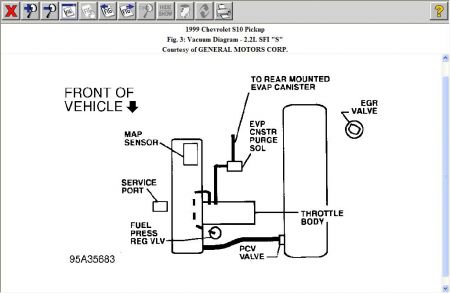 There are more featured (below)
Images (Click to enlarge)

CARADIODOC
Please start a new question so we can tailor our answer just for you, and to help the people researching this topic who have the same model as you have. And you must understand there may be multiple engines available for your model, so be sure to list the engine size.

Also be aware there are usually different vacuum hose routing diagrams depending on the options on your car. The only way to know for sure you have the right diagram is it's on the emissions sticker under the hood. In the unlikely event yours is missing, Ford has very nice paper "EVTM" manuals. That's "Electrical, Vacuum, something something". You can find those pretty inexpensively on eBay. I bought 50 of them from one seller for my classroom a few years ago. That book will have every diagram that could pertain to your model.

Cheers
Was this
answer
helpful?
Yes
No

JUSTINRANTON
I have removed the vacuum hoses from the air intake plenum and I now need a diagram to replace them. I'm not sure where they go. I think there is only 3 of them. At least that's all coming from the air intake.
Was this
answer
helpful?
Yes
No

Here are engine and emissions vacuum hose diagrams for both the 4 and 6 cylinder engines. (Below)

MATTOLITHIC
Need to know what this vacuum line is on the intake manifold and where it goes.
Was this
answer
helpful?
Yes
No

KASEKENNY
It is hard to know what hose you are talking about without seeing it, but here are the diagrams we have. If you still can't figure it out, get a picture of the line and the location in the intake and I should be able to tell you what it is.
Images (Click to enlarge)

APOSTLE
Have no vacum to selector switch for air conditiong control. Need routing of vacum lines and where located.
Was this
answer
helpful?
Yes
No

HMAC300
The hose you are looking for is black with a gray stripe. There should only be one and it will connect to the front of dash(firewall) there may be a block there with a hose that goes inside to the heater. I't spretty simple you shouldn't need a diagram for that.
Was this
answer
helpful?
Yes
No
-2

I Just Need To Find A Routing Diagram For Yhe Vacuum For Carberator And Transfer Case Any Info Would Be Very Pleased It Is A 4.3 Litre V6...
Asked by terry tate ·
1 ANSWER
1990
CHEVROLET S-10

My Fuel Pump Went Out I Need The Diagram For The Fuel Pump Relay Switch. It Still Will Not Start. No Power To The Pump.
Asked by VJD ·
9 ANSWERS
13 IMAGES
2002
CHEVROLET S-10 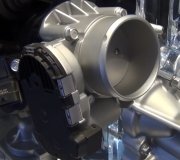