1997 Plymouth Breeze heater does not turn on

KEVJJR2221
Changed started in my 1997 Plymouth breeze. Now the heater doesn't turn on window don't roll down and air bag light is on.I have no clue. Had a friend do it and I think they put the wrong starter on. They put a starter for a 1998 on. Don't know if that matters I just need help
SPONSORED LINKS
Do you
have the same problem?
Yes
No

CARADIODOC
The starters are the same over many years. There's also some different styles that all interchange. Chrysler is better about parts interchanging than almost any other manufacturer. It's more likely a fuse blew during the service, especially since the battery had to be disconnected. Fuses often blow on cars with computers when the battery is reconnected due to the current surges. Look under the hood and inside the car.

Air Bag and anti-lock brake computers will always have two feed circuits, each on its own fuse. That is so there's a power circuit to run the warning light on the dash when the other fuse is blown.
SPONSORED LINKS
Was this
answer
helpful?
Yes
No

My Car Seems To Be Running A Little Warmer Than Usual And When My Heater Si On It Is Not Very Warm?
Asked by dwickman ·
1 ANSWER
1998
PLYMOUTH BREEZE 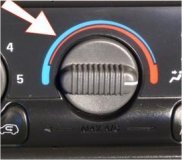 GUIDE
Heater
Step by step guide on how an automotive heater system works, this information pertains to all internal combustion vehicles and hybrids.

My Question Is My Air Is Blowing Out From The Defrost And Not From The Main Vents.
Asked by pete16 ·
1 ANSWER
1 IMAGE
1996
PLYMOUTH BREEZE

Heater Problem 1998 Plymouth Breeze 4 Cyl Two Wheel Drive Automatic? Miles How Can I Fix The Blower Levels? It Only Works On The...
Asked by BonnieH ·
1 ANSWER
1998
PLYMOUTH BREEZE
VIEW MORE