MIKE BUTLER
I have a 1988 Dodge Dakota that was wrecked. If you put fuel in the carberator, it will run until the fuel burns up then die. Is there a auto fuel reset switch and where that might be?
SPONSORED LINKS
Do you
have the same problem?
Yes
No

CARADIODOC
You're thinking of that silly Ford system. Are you sure you have a carburetor and not a throttle body? I can't remember which year they switched over to fuel injection. Do you have six individual injectors?
SPONSORED LINKS
Was this
answer
helpful?
Yes
No

MIKE BUTLER
I do believe I have a carberator.
Was this
answer
helpful?
Yes
No

CARADIODOC
Then you have a mechanical fuel pump on the front, right side of the engine. The closest book I can find is for an '87 Dakota and in that one every engine does indeed still use a carburetor. If the pump is not drawing fuel from the tank, given the history, first look for a crushed metal fuel line along the frame rail. Next, there should be a third nipple on the filter with a vapor return line going back to the tank. Be sure those two lines aren't switched although I think they are different diameters.

The last problem is not related to a crash but will cause the pump to not draw fuel fast enough. That is a collapsed pickup screen inside the tank. The last one I bought for one of my cars was in the late '90s and cost three bucks. Typically they collapse after about 15 miles, then you lose speed and power until it finally dies. You usually have to let it sit for about five minutes before it will start and run for a few more miles.

If you suspect that screen might be plugged or collapsing, you can remove the inlet pipe from the pump, remove the gas cap, then blow compressed air into the pipe to blow that sock off the pickup tube. A helper should hear the air bubbling into the fuel by the filler too. That will verify the supply and return lines aren't switched.

You can also verify the pump is working by attaching a temporary inlet pipe and hose that you can drop into a can of gas under the truck. The pump should be able to move about one quart per minute when the engine is idling. If it doesn't move any fuel and it is supposed to be good, check the eccentric that runs the lever. That is an off-center cup that is bolted to the front of the camshaft sprocket. I don't know if you'll be able to see it through the mounting hole when the pump is removed, but I would try because otherwise you'll have to remove the timing chain cover to get to it.

Don't overlook pinholes rusted in the steel supply line. With the newer electric pumps in the tank that line is pressurized so you'll see fuel leaking out. (Boy, how many times I've had fuel leaking out of my old rusty, trusty '88 Grand Caravan!) With your mechanical pump, that line will be under a slight vacuum so you might not see the wetness until you once get that line filled with fuel. After that, those leaks can cause the fuel to siphon itself out of the tank and make a huge mess on the ground.
Was this
answer
helpful?
Yes
No

WRENCHTECH
I believe this is going to be a TBI 3.9, not a carb.
Was this
answer
helpful?
Yes
No
+1

CARADIODOC
Thanks Wrenchtech. Are you listening Mike? If you have a throttle body, (looks like one or two small black eggs on top), you're going to have an electric fuel pump in the tank. You should hear that hum for one second after you turn on the ignition switch. After that it runs when the Engine Computer sees engine rotation, cranking or running. If you don't hear it run for that one second, check if the fuel pump relay or the automatic shutdown (ASD) relay is turning on. Also be sure everything is connected at the fuel tank. My next step up is a '93 Dakota manual. I'll see if I can find anything closer.
SPONSORED LINKS
Was this
answer
helpful?
Yes
No
+1

WRENCHTECH
Let me know if you need any diagrams Doc.
Was this
answer
helpful?
Yes
No
+1

MIKE BUTLER
I know the fuel pump is in the fuel tank as I have had to replaced it before. It has a carb as ytou take the air filter off, it is underneath. I do not know where the ASD is, that was my original question. Although reading the comments, it sounds like it might be the screen in the tank.
Was this
answer
helpful?
Yes
No

WRENCHTECH
No, it's not a carburetor. It's Throttle body fuel injection.
The relay in on the left side of the engine compartment, near the strut tower.
Image (Click to enlarge)

MIKE BUTLER
Thank you. I will look at this tommorrow.
Was this
answer
helpful?
Yes
No

CARADIODOC
Also, the ASD relay is not the problem. When the Engine Computer turns it on, it sends voltage to the ignition coil among numerous other things. You know you have spark because the engine runs when you pour in fuel. That proves the ASD relay is turning on.

If you were referring to MY comment about the screen in the tank, that applies more to the carbureted version. The fuel injected version has a screen too that can become plugged but the symptoms will be a lot different than a no-start condition. You need to verify the pump is running.

Hey Wrenchtech, can you help with the wire color at the pump connector? In the '93 its a dark green / black but an '88 might be different.
Was this
answer
helpful?
Yes
No

WRENCHTECH
The diagrams leave a lot to be desired but it looks like it comes directly from the ASD relay on Dk Grn/Blk to the fuel pump.
Image (Click to enlarge)

CARADIODOC
Thank you so much. Mike, you might look for that two-terminal connector with one wire shown way at the top. I don't know where it is located but if it is corroded or unplugged, that would cause the pump to not run.
SPONSORED LINKS
Was this
answer
helpful?
Yes
No
+2

CARADIODOC
You really should start a new question because this was a private conversation between just a few people. As such we are the only ones who are notified of your addition, so none of the other experts are going to see it or be able to help. That might not get you the help you need. You don't have to retype everything. Just copy and paste it in the new form at this link:

Also, your description of the symptoms is different. The first thing you must do is check for spark when the crank / no-start is occurring. Nothing you've said so far suggests loss of fuel pressure is the problem. In fact, when Chrysler fuel pumps fail, they almost always fail to start up. It's just about unheard of for one to stop running on its own while you're driving.

The most common cause of stalling while driving is a loss of fuel pressure and spark, but too many people get hung up on the first thing they find missing and forget to look for additional clues. If you look at the second diagram, you'll see the automatic shutdown, (ASD) relay feeds the ignition coil, injectors, and the fuel pump, along with a few other things. About 95 percent of stalling problems involve the ASD relay being turned off by the Engine Computer, and that is almost always in response to a loss of signal from, in this case, the Hall Effect pick-up assembly in the distributor. That's the flat disc under the rotor. It is of the same design that caused a lot of trouble in the 2.2 / 2.5L engines in the early front-wheel-drive cars. These sensors often fail by becoming heat-sensitive, then they work again after cooling down, usually for at least an hour.

To explain why this happens, the Engine Computer turns the ASD relay on for one second when you turn on the ignition switch, then it turns it back off. That is to insure fuel pressure is up for starting in case it bled down over days or weeks. Next, that relay gets turned on again anytime the engine is rotating, meaning cranking or running. The computer knows that by the signal pulses it receives from the Hall Effect pick-up assembly, or on newer models, the crankshaft position sensor and the camshaft position sensor. This is a safety feature in case a fuel line gets ruptured in a crash. The fuel pump would dump lots of raw gas on the ground where it would be a serious safety issue. Instead, with a ruptured line, there can't be any fuel pressure. With no pressure, no fuel can spray from the injectors. The engine stops running, signal pulses stop showing up, the computer turns off the ASD relay, and the 12 volts to the fuel pump is turned off.

Normally we don't approve of throwing parts at a problem until it has been diagnosed, but in this case, knowing this is a common failure, and knowing the intermittent nature of the problem, this is the logical place to start. If you have access to a scanner, you can also use that to view the state of the distributor signal. It should switch from "No" to "Present" when you start cranking the engine.
Images (Click to enlarge)

2000 Dodge Dakota Ac Cycles On And Off

Symptoms: A/c Works Fine For About 20 – 25 Minutes. Then The Cold Air Quits (i Assume The Compressor Disengages) For Anywhere From 15...
Asked by Jim.Sanchez ·
3 ANSWERS
2000
DODGE DAKOTA 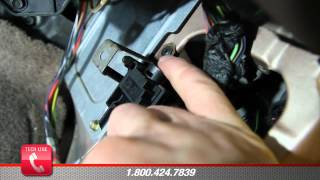 2006 Dodge Dakota Seatbelt Light On The Dash And...

The Seatbelt Light On The Dash Will Not Go Out Even Though I Always Use My Seatbelt And Make All Passengers Wear Theirs Also. In Conjunction...
Asked by fandyb48 ·
1 ANSWER
2006
DODGE DAKOTA

2001 Dakota, V6, Auto, Engine Light Comes On From Time To Time. I Have Reset It By Disconnecting The Battery, And It Would Carry On For A...
Asked by jimmy r ·
1 ANSWER
2001
DODGE DAKOTA