My car does not operate windows

ZIYAUL ANSARI
My car does not operate window because master switch damaged. Please detailed.
Thanks
Do you
have the same problem?
Yes
No

Here is the information you requested. The trim piece that holds the switch into the armrest simply pops out being a press in fit with a small flat blade screwdriver. You can then remove the switch from the trim piece and reinstall. I've attached a picture below. Hope this helps and thanks for using 2CarPros.
Images (Click to enlarge)

B101875
About 2 months ago the drivers side window would not go up. All the other windows worked fine but this one. So I tried to manuly and that was not good. So after the window man put a new window in, he told me that the door switch was bad. So today I tried repairing the switch. I took it apart and saw that the switch in question looked like it was burnt. I have repaired switches like this before around the house so I tried with this one. I put it back together and in the car and all the other windows still went up and down just fine from this switch. So I tired the one window in question from this switch. It didn't and now none of the windows will go up or down from this switch or their own switches. This sucks cause one of the windows is down. So I had to trash bag cover it again. Well the guy that fixed my window wanted $250 to replace it. Discount Auto parts wanted $75 for the switch, they told me this after he told me his cost for the switch was $35. My 1st question do you know where I can find a cheaper one, and if I replace the this switch (Driver's side multi-button) will my other windows start to work? When the other other windows started not to work right after I tried repairing the multi-one, I checked the fuses and they were fine. So those are my 2 questions. Can anyone help? Thanks, Ed
Was this
answer
helpful?
Yes
No

2CARPRO JACK
Salvage yard will be the only cheaper place. I would assume that your other windows will work again considering they worked before you took apart the switch and all fuses (powers) are good
Was this
answer
helpful?
Yes
No

B101875
Thanks For your reply.
Was this
answer
helpful?
Yes
No

STELWOOD
I have power windows and the driver's window will go down but does not come back up. The other 3 windows work fine.
SPONSORED LINKS
Was this
answer
helpful?
Yes
No

MERLIN2021
Check the switch Here's the chart. Let me know what happerns, an easier method is to remove the door panel, use a voltmeter set to 2volt DC, dissconnect the window motor connector, press the button for down, place black probe on a ground, and the red probe into the harness side of the connection, you should get 12volts, if it doesnt show 12v try swapping the red probe into the other side of the connector at harness end. Test both up/down this way. The chart is to test switch continuity.
POWER WINDOW SWITCH CONTINUITY TEST (DRIVER'S SWITCH) Using an ohmmeter, check continuity between specified terminals with driver's power window switch in specified position. See appropriate DRIVER'S POWER WINDOW SWITCH CONTINUITY TEST table. See Fig. 1 or Fig. 2 . If continuity does not exist at specified terminals, replace power window switch.
10/20/2009 ...

rear window left side is down and won't go up, I think it's the main switch the problem, but I don't know the best way to remove it without damaging it.I don't have picture to send. Please advise
Was this
answer
helpful?
Yes
No

The master switch is clipped on and to remove, use a flat screw driver to pry it out. Be careful not to use too much force to avaoid damage to the panel.
Was this
answer
helpful?
Yes
No

DANIE2U
Hi, I have a problem with my driver side window switch, I can lock all the doors and I can stop all the other windows from opening with the lock feature. All the other windows open and close on there own but I can't open my window or any of the other windows from the master switch. I thought it was the master switch so I changed it and good thing it was burnt on the inside I bought an after market replacement and it works the door locks and the window lock, my old burnt out switch did the same things. Can you help?
Was this
answer
helpful?
Yes
No

The last part of your question is rather confusing.

Do you mean to say the new master switch also cannot operate the other windows?

The master switch can be used to stop current supply from going to the other windows but operating them is a separate circuit.

Since you said the old master switch was burnt, you need to check the wires and connectors.

You need to check for a separate fuse for the driver door window.
Was this
answer
helpful?
Yes
No

DANIE2U
Hi and thanks for you quick response. I'm sorry for not explaning myself better, but yes the new master switch I put in doesn't work any of the windows just the door locks and it stops the other windows from opening if I push the lock window feature. You said I might need to check a separate fuse, can you tell which one and where it is located. I know I said my old master switch was burnt but this didnt effect any of the wires it just burnt on the inside
Was this
answer
helpful?
Yes
No

DANIE2U
I have found the problem it was the wire harness between the driver door I spliced them together and everything works find. Thanks so much
Was this
answer
helpful?
Yes
No

UNCLE BOB
This car runs like a jet. No problems at all. Until today.

If it was a fuse, none of the window controls would work right? A switch ? How tough to fix myself?

Bob S.
Was this
answer
helpful?
Yes
No

You will have to remove the door trim to test for power at the motor, if the switch is faulty, they are not repairable and will have to be replaced.

Make: Toyota Model: Camry Year: 2001 Miles: 80,000 Engine: V4 I Have A Strange Issue With My Driver Side Window. The Windows Go Down...
Asked by nisthana ·
1 ANSWER
TOYOTA CAMRY 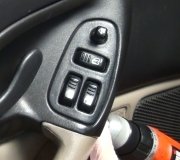 Couple Of Years Ago Rear Left Side Power Window Stopped Working. Since It Was Fully Closed I Didn't Bother Much. Now The Rear Right...
Asked by mrahman ·
41 ANSWERS
61 IMAGES
1996
TOYOTA CAMRY

Driver's Window At Times Stops Working, Won't Go Up Or Down. I Removed Window Switch And Reinstalled It, Has Been Working Since....
Asked by Anonymous ·
31 ANSWERS
17 IMAGES
2006
TOYOTA CAMRY

I Have A 96 Camry. It Runs Well. I Turned It On This Afternoon And None Of My Dash Works, The Air Conditioner And Radio Do Not Work. My...
Asked by toycam96 ·
1 ANSWER
TOYOTA CAMRY
VIEW MORE