Turn signal and hazards do not work

APRILSMITH02
My left turn signal does not work or doesn’t work when I turn on hazards. Light bulb is fine. I think it’s the fuse, I just don’t know where the turning signal fuse is located as I don’t see it on the manual.
SPONSORED LINKS
Do you
have the same problem?
Yes
No

STEVE W.
It won't be a fuse as there isn't one for just one side. Is this for the left rear or left front or both? Does the dash light or mirror light work on the left? If it is only a single lamp out the likely hood is either a bad socket or broken with. If it is all of them it is likely the control module in the junction box as it controls all of them.
Image (Click to enlarge)

APRILSMITH02
Left front and rear. What would I need to do to fix it?
Was this
answer
helpful?
Yes
No

APRILSMITH02
The dash light does not work on the left as well.
Was this
answer
helpful?
Yes
No

STEVE W.
That's what I was afraid of. The way that system works all of the signals are run through the electronics that are built into the junction box in the left side of the dash. The only way to repair that is to replace that module. Mechanically it's not that hard to replace, you remove the lower dash panel, disconnect the battery negative terminal. Unbolt it and remove it. Then unplug the 7 connectors to the smart junction box. Reverse the process to install the replacement. However the replacement needs to be coded to your car so that the options you have all work and the engine will run. That requires a scan tool and the proper files to get the parts to talk to each other.
Image (Click to enlarge)

APRILSMITH02
Is it a fuse for all turning signals as well? If so, where is it located and what’s the name of fuse?
SPONSORED LINKS
Was this
answer
helpful?
Yes
No

STEVE W.
There is only one fuse which powers the entire system, hazard, left and right turn interior lights and marker lights as well as low beam headlights are all through that module. For it to be that fuse all of those lights would not be working, not just the left side turn signals. Your car is like most modern vehicles, they did away with the simple systems and went to control modules for everything, for instance the turn signal and hazard "flashers" no longer exist in your car, they are part of this same control module. When you said that it was both the front and rear as well as the dash lights that were out that confirmed it was the control module as they are all fed from the module but in two different control areas. The only way to repair it is to replace that module.
One of the things I really dislike about all of the modern vehicles. My wife drives one where they put a majority of the electronics like turn signals, high and low beam headlights, brake relay, fuel pump relay, and most of the rest as a self contained smart fuse box, they each have fuses, but I've only seen a few of those blow, instead the 5-cent fuse stays okay and wipes out part of the $800.00 fuse box instead.
Was this
answer
helpful?
Yes
No
+1 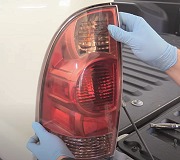 When I Put My Car In Drive, The Dashboard Lights Where The Drive Gear Is Starts To Blinking As Does The Chronometer In The Cd Player. Do I...
Asked by dellev56 ·
3 ANSWERS
2000
HYUNDAI SONATA

When The Lights Are On The Dash And Tail Lights Blink Rapidly. When You Open The Driver Side Doors It Stops.
Asked by hoffa123 ·
2 ANSWERS
1 IMAGE
2004
HYUNDAI SONATA