93YOTA_PROJECT
The check engine light has been going on and off. But when it is on it runs like crap, and when its off, it runs fine. It has been acting up for the past 2 months. And it is scary to drive on the road. When the light comes on, it acts like it looses power, and it acts bogged down. But as soon as the light turns off it runs fine again.
SPONSORED LINKS
Do you
have the same problem?
Yes
No

JAMES W.
The most common cause for a Toyota CE light to fluctuate on/off is an O2 sensor out of range. What ever is triggering the light should be logged in computer memory. You should go over this guide to see what the codes are.

93YOTA_PROJECT
I went up to the local parts store, but they dont make a code scanner for the older toyota trucks until 1995. I had to do a trip wire and test it. But the problem is, is that the light doesnt always stay on and it doesnt read the code out right.
Was this
answer
helpful?
Yes
No
+1

JAMES W.
You've got the older system under the driver's seat? If you, do you have a red and green led light or just a green? Please advise.
Was this
answer
helpful?
Yes
No
-1

93YOTA_PROJECT
I checked under the whole bench seat, and there isnt any plug-in things or wires of any sort. The way the manual tells to check the the codes for the check engine light is to make a trip wire and connect T1 to E1 and turn the ignition on, but the light blinks normal when checkin it. Is there a different way to check the o2 sensors and see if they are any good?
Was this
answer
helpful?
Yes
No

JAMES W.
OK, if you can't pull the codes, you can test the O2 sensors with an ohm meter as follows;
Remove the sensor(s)
With the sensors at 68 degrees F, test accorss terminals +B and HT.
Ohms resistance should be 5.1 to 6.3
California models. 4.5 to 6.0
Any readings above or below these ranges, the unit is defective.
IMPORTANT NOTE; if the sensors test good and you re-install them, be SURE you coat the sensor threads with some sort of "anti-seize, or you'll never get them out again. Hope this helps
SPONSORED LINKS
Was this
answer
helpful?
Yes
No

93YOTA_PROJECT
Ok, I got out the ohm meter, but where do I find the +B and HT things? I looked at the diagnostics box under the hood and there is a +B but no HT. Is there somewhere else I have to stick the probes?
Was this
answer
helpful?
Yes
No

JAMES W.
You want to test the O2 sensor accross the terminal where the sensor lead plugs into the wiring harness. Keeping in mind, if the sensor is much above or below 68 degrees it will change the ohm readings. I'll pull a schematic and attach it to this post.
Was this
answer
helpful?
Yes
No 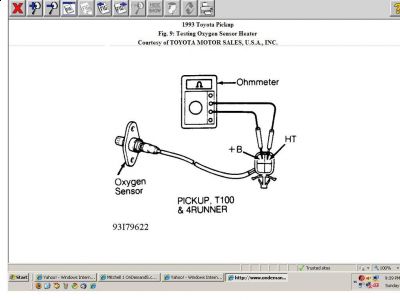 93YOTAPROJECT
I tested the o2 sensor. Andi got 3.92, that was at the outside temperature which is aroud 70-75 degrees. So tomarrow im going to go up to discount parts store and check a new one. Hopefully this is the problem. I'll get back to you with what I find out.
Was this
answer
helpful?
Yes
No

JAMES W.
Let me know, chief.
Was this
answer
helpful?
Yes
No

93YOTA_PROJECT
I put in a new oxygen senor yesterday, but it aint runnin any better, I turned the truck on and let it warm up, and then I drove it around the neighborhood and almost didnt make it back. I then let it sit in the driveway and the light went off, and it would run for a while but then it would come on and run like crap. I dont know what is goin on with this thing. Hopefully you can help
Was this
answer
helpful?
Yes
No

JAMES W.
Well, if your CE light is coming on and it's not registering any codes, I have to think your ECM is bad.
SPONSORED LINKS
Was this
answer
helpful?
Yes
No

93YOTA_PROJECT
If the ecm is bad, then whydoes it run soo rough when the light comes on. Oh, by the way, the other day, I started the truck, and I drove it down the road and turned around. On my way back, the truck started stuttering REAL bad. I barly mad it to the driveway. The truck was pretty much jerking everytime it stuttered. When I put it in nuetral to open the gates, my truck stalled. This has never happened before. Would this result be from the ecm being bad? Or could it be the mass air flow?
Was this
answer
helpful?
Yes
No

JAMES W.
It "could" be the mass air, sometimes these can be intermittent and not set a code.
Let's test your ECM by disconnection the mass air, TPS or engine temp sensor, and see if you can set a code while running the motor. If no codes are set, there's something wrong with the ECM. It may be getting information on a bad sensor, but not processing it like it should. Let me know.
Was this
answer
helpful?
Yes
No
+2

JOSH BUKOSKEY
Help! Was there ever a solution/fix to this?
I have replaced:
Fuel Pump
Fuel filters x2
Oxygen Sensor
MAF Sensor
TPS
Plugs and wires.
Now I sent in my ECU because we can't pull a code even when the engine light is on. The OBD1 does NOT read anything (used several different OBD1 devices). I also tried to trigger the code by using metal contact pin in the Diagnostics box (to watch the engine light flash)

Please help. This is my 1992 Toyota Winibego v6, I am currently stranded in North Utah, My home is in Seattle.

Took it to a shop they said had to be the ECU since it wasn't allowing the OBD1 to pull a code. The ECU was sent in and tested and they couldn't find ANY issues with it.

I was having the same issue as described above.
I found a temporary fix that lasted awhile-until the past week, If I disconnected the + battery and removed the EFI fuse after each use, put them back before I decided to drive (both immediately). Then it would work like nothing is wrong.
Now I can't get the Engine light off 99/100 times.

Thanks for any immediate help, expertise or thoughts!
Was this
answer
helpful?
Yes
No
-1

I have seen the engine coolant temperature sensor causing this issue it shorts out at times causing the engine to have issues. Here is a guide to show you the steps to change it and the location of the sensor on your car below:

Thanks for your prompt response. That was one of the last options I thought for the issue.

Have you seen this often cause an issue with pulling the diagnostic code?
Perhaps furthermore not allowing a computer reading.
Was this
answer
helpful?
Yes
No

JOSH BUKOSKEY
Could it be the ECT sensor wire? The gauge has been showing normal temperatures. Perhaps part of the wire defected.

I am looking to see if I can find a schematic to where this sensor wire goes and how easy it is to replace.
Was this
answer
helpful?
Yes
No
+1

KEN
If the gauge is working the sender can be okay, does the EFI and circuit open relay work? Here is the location and a guide to test them:

If they check out I would get a used ECM and install it.

JOSH BUKOSKEY
Changed the ECT (Engine Coolant Temperature Sensor), sent the computer in for testing/repair (no issues found).
Still having the same issue. Any other ideas?
Since I am stranded. I took it into a Toyota dealer today. They said possibly electrical issue but not sure. I hope to hear back soon as I would like to get back on the road. Three weeks in Utah so far and only three days of actual fun.
Was this
answer
helpful?
Yes
No

Check Engine Light Is On?

Check Engine Light Is On?

My Toyota Pickup Has 126000 Miles On It And The Check Engine Light Just Came On. In The Owners Manual It Says It Is A Problem With The...
Asked by HONKEY ·
8 ANSWERS
4 IMAGES
1994
TOYOTA PICKUP

Electrical Problem 2006 Toyota Pickup 4 Cyl Two Wheel Drive Manual I Have A Toyota Hilux Its Have A Problem Before 3 Week It Come A...
Asked by umair ·
1 ANSWER
2006
TOYOTA PICKUP

The Charge Warning Light And The Brake Warning Light On The Instrument Panel Flash Together At A Steady Rate Similar To The Emergency...
Asked by tmdavis ·
1 ANSWER
1984
TOYOTA PICKUP
VIEW MORE