FORD_123
I do know if you would know the answer to this. My back speakers work with my stock radio but when I put my aftermarket pioneer radio in only the front speakers work. This is happening to my friend too. Should I wire my back speakers to the front ones to get them to work?
SPONSORED LINKS
Do you
have the same problem?
Yes
No

CARADIODOC
Most commonly this happens when some of the speakers are run by a remote amplifier. You either need to bypass that amp or you need to make it turn on. On older vehicles the amp simply got a turn-on signal from the radio. That would be the yellow or blue, (typically), wire on your new radio labeled "power antenna", "amp", or "switched power". The mating wire would be in the original plug.

On many newer vehicles, the engineers complicated the circuit unnecessarily. Instead of a wire for the turn-on signal, it is a digital signal sent along the data buss. There are some aftermarket radios that will generate that signal, but you are better off just bypassing the amp.

Connecting front and rear speakers together is not a good idea if you do not know how many speakers each channel can handle. Most original radios can run two speakers on each channel, but with aftermarket radios, the additional load could stress the output ICs. That type of failure can be identified and is rarely covered under warranty.
SPONSORED LINKS
Was this
answer
helpful?
Yes
No

1997 F150 Xcab & Bed. The Passenger Door Speaker Is Making Cracking, Gurgling And Other Noises Sparatically With The Radio Switched On Or...
Asked by bruce.diers@ferguson.com ·
1 ANSWER
1997
FORD F-150 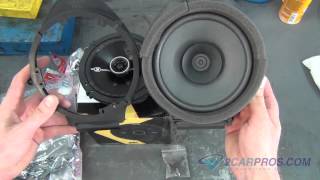 I Just Purchased This 2014 Xlt F150 Clubcab. I Have An Infinity Powered Sub That Accepts High Level And Low Level Inputs I Need To Splice...
Asked by derek gullickson ·
3 ANSWERS
2014
FORD F-150

All Warning Lights Come On When You Start The Truck It Runs And Drives Tach Speedometer And Temp Gauge Do Not Function Mini Message Center...
Asked by pilotdriver ·
2 ANSWERS
1 IMAGE
2005
FORD F-150

Was Driving Last Night And All Of A Sudden The Radio...

Was Driving Last Night And All Of A Sudden The Radio Cut Out. Tried To Jump It And Nothing. Went Out And Got A New Battery Tonight And All...
Asked by Nxd4b ·
5 ANSWERS
2005
FORD F-150