1991 Other Pontiac Models Antifreeze/Coolant not circulating

HISTORY: I have a 1991 Pontiac Tempest (3.1L) that I'm having overheating problems with. At first, it was leaking antifreeze. The car wouldn't blow heat, but the fan worked. When I turned the fan on, there was a sickly sweet smell. Although it was a pain to keep filling the antifreeze (the resevoir would run out about every 2-3 days), at least my car wouldn't overheat. I figured I probably needed a new heater core. However, I've since found that when my engine was recently replaced (about 2 weeks before I noticed my antifreeze leaking), a line was cut near my firewall and repaired with clamps. So now I'm not sure if I simply need to replace the clamps properly or if my heater core really does need to be replaced.

At any rate, the antifreeze stopped leaking and my car began to overheat quite quickly. The resevoir is still full, but the antifreeze isn't being drawn out of it. I was told that there may be an airlock from my antifreeze running out before, and to run my car with the rad cap off for a bit to try and push out air. I tried this, but it didn't help. I then replaced my thermostat, thinking it may be stuck close (and cheap part/easy to replace anyways). This hasn't helped either. I asked another person to take a peek at my car (handy with vehicles, though not pro mech or anything). We tried putting antifreeze directly into my rad to see if it would stop the car from overheating. I'm not sure how he was able to tell, but the guy said that the antifreeze wasn't circulating. He also mentioned that a seal (just down and to the left of my thermostat) needs replacing as antifreeze was bubbling near there.

So, I'm now wondering if perhaps I need a water pump if my antifreeze isn't circulating? Once I can get my antifreeze/coolant to start circulating again, I will replace the clamps and seal I mentioned. If that doesn't fix the leaking issue, should I replace my heater core? Or is there something else I should investigate first?

Also, there has never been any smoke if that info helps at all. I've never really noticed any obnoxious sounds either. It revs low sometimes, but I think that was from condensation in the fuel lines and I haven't noticed that problem again since using gasline antifreeze. Thought I'd mention just in case, though.

Cheers!
Trinity
SPONSORED LINKS
Do you
have the same problem?
Yes
No

JACK42
The heater core. Sounds as though it might be broken inside from somebody trying to remove the hoses when the engine was installed. They have connectors on them that are difficult to get to release sometimes. Your car should have a bleeder if not 2 located on the engine to help bleed air out. Small bleeder on top of t-stat housing? On top of hard coolant line on engine. Does sound like it is full of air. Try removing the t-stat and running the engine to see if it overheats, or circulates. If it does, replace the t-stat and try to warm it up again.
SPONSORED LINKS
Was this
answer
helpful?
Yes
No 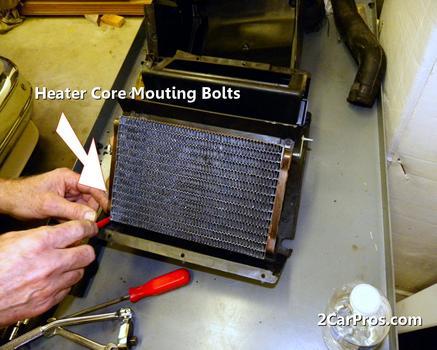 GUIDE
Heater Core Replacement
Step by step guide on how to replace an automotive heater core, though each car is different in complexity, these steps outline the basic procedure.

I've Gutted My Interior (gto) And I Need To Remove And Replace The Firewall Pad. It's Behind The Heater Box, (if That's What It's Called...
Asked by PaulB101 ·
1 ANSWER
1965
PONTIAC OTHER

2006 Pontiac Heater Plug For The Winter

I Have A 2006 Pontiac Vibe And I Was Wanting To Know Where Exactly The Heater Element Goes On The Engine Block When You Plug It In The...
Asked by Armychris87 ·
1 ANSWER
2006
PONTIAC OTHER 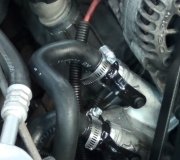