JOEHENNESSEY
My pass side power window won't go up from either the pass or drivers side controls although both will lower it. I jumped power directly to the motor and it will go up and down. How do I troubleshoot?
SPONSORED LINKS
Do you
have the same problem?
Yes
No

JOEHENNESSEY
Replaced $93 switch. Didn't fix anything. How do I troubleshoot? /Jh
Was this
answer
helpful?
Yes
No 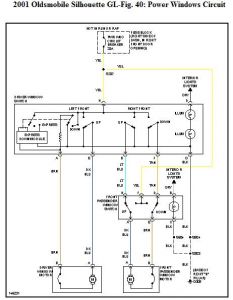 sorry so small picture. but if the switch is good then the only thin g that is can be is a open in the light blue wire from the drivers side to passengers side switch or a open in the tan wire. providing the switches are good. the dark blue and the brown wires go from pass switch to the motor and work on reverse polarity which simply means one wire is power in one direction and ground in the other direction,(vice-versa in opposite direction) a ohm meter on the wires from switch to switch should be the easiest way to tell the broken wire. **whenever there is a wire problem in a window circuit you can usually find it in the rubber boot between door and door jam. that wire is constantly flexing when opening and closing door and i would inspect drivers side first for the broken wire
Was this
answer
helpful?
Yes
No
+1

JOEHENNESSEY
SWITCH WAS GOOD. Unfortunately I didn't reconnect power to the motor after jumping it (duh). Thanks for the quick response, you guys rock! /Jh
Was this
answer
helpful?
Yes
No

MASTERTECHTIM
So the drivers master switch fixed it? Thanks for the response
SPONSORED LINKS
Was this
answer
helpful?
Yes
No

MYCARSAPIECE
Tim, we have a similar problem. First the only problem was passenger side switch would put window down but not up. Driver's switch would still put it up, so not that bad (except when the husband thought he'd be funny in Bear Country, USA - another story entirely).

A few days ago the driver's switch stopped working on passenger window entirely. We ordered a new driver's switch (with passenger one coming in soon), but that didn't fix the problem. I took apart the passenger switch to see what I could find. One of the connectors between the tan/apricot wire and the switch has electrical tape like it was previously fixed, and the silver connector doesn't extend to the opening like the others do. It appears to be deformed.

My questions are 1) where can we get a replacement for that silver connection thingie, 2) is there a way to put it back on that is better than the black electrical tape used previously, and 3) could I get a bigger version of the wiring diagram you included above so we can look for a possible broken wire in the driver's side door?

You guys are GREAT, by the way!
Was this
answer
helpful?
Yes
No

MIKE H R
You can get the connections at most automotive stores. As for the electrical tape and short wire you can extend it using the same size wire and also use shrink tape instead of electrical tape. To make the diagram bigger from mastertechtim you can go to picture and left click, then click on save picture, once you have done that you can enlarge it using photoshop or paint to enlarge it
Was this
answer
helpful?
Yes
No

MYCARSAPIECE
Thanks! I appreciate the info on the connection! We've fixed the window now, so I no longer need the schematic, but FYI I know how to zoom the picture, but the resolution was so low that it was unreadable. (It's a 14.8K JPG.) Have a great day!
Was this
answer
helpful?
Yes
No

MIKE H R
Sometimes when we post them they have diferent jpg's
Was this
answer
helpful?
Yes
No

Automatic Windows Will Not Operate Most Of The Time. Cannot Get Them Up Or Down
Asked by justinejs@peoplepc.com ·
3 ANSWERS
2001
OLDSMOBILE SILHOUETTE

2000 Oldsmobile Silhouette Pass Window Will Not Go Up

We Have Been Having Problems With The Passenger Window On This Van. We Used To Be Able To Wait A Little Bit And Then The Window Would Go Up...
Asked by ccwebpastor ·
1 ANSWER
2000
OLDSMOBILE SILHOUETTE

Out Of Nowhere I Went To Roll My Window Up And It Wouldn't Go Up! It Will Go Down But Not Up. It Just Started Doing This ! I Always Had...
Asked by redheadjennieo ·
2 ANSWERS
2002
OLDSMOBILE SILHOUETTE

2001 Oldsmobile Silhouette Drivers Side Power Window Will Go Down But Not Up. Do You Think Its The Switch Or The Motor?
Asked by michael.frye@att.net ·
5 ANSWERS
2 IMAGES
2001
OLDSMOBILE SILHOUETTE