MATTHEW.MORAN
I am installing an aftermarket radio with gps and I am supposed to clip a wire onto the parking break power wire.

The only problem is I know know with color it is. So my question is what is the power wire to the parking break?

thanks
-matt moran
SPONSORED LINKS
Do you
have the same problem?
Yes
No

SATURNTECH9
First of all thank you very much for your donation. It must be a safety device trigger because they don't want you programing a new location on the gps while you are driving. That's what I have seen on the factory one's some sort of fail safe to not allow you to put in a new trip while you are driving. On yours you must have to have the ebrake on to put a new trip in the gps.
SPONSORED LINKS
Was this
answer
helpful?
Yes
No

MATTHEW.MORAN
A real answer would have been great since I already knew that. Next time read the question and attempt to answer it.
Was this
answer
helpful?
Yes
No

SATURNTECH9
You didn't say you knew what the wire was for going from the gps to the parking brake you said The only problem is i know know with color it is. So my question is what is the power wire to the parking break?That sound's to me like you were asking what the wire was for going from the gps to the ebrake i did read the question and i tried to answer it.I'm sorry i wasn't on the same page as you if you would have said the blank color wire to the parking brake goes where? So i can bypass the safety feature the gps company put in so i can change my trip without having the ebrake on i could have given you a better answer.If you would have been clearer in your response back to me rather then try to tell me how i was wrong answering your question and what i should have said then you could have actually gotten a good answer you could use.I posted a partial wire diagram to show you where the wire's go the purple wire is the turn on for the ebrake dash light when it's grounded thru the switch.So if you want to bypass having to have the ebrake on then ground that wire that goes to the ebrake.Everyone has a bad day no hard feeling now you have your answer and you can say you got a useful answer from 2carpros.Thank you for using 2carpros. 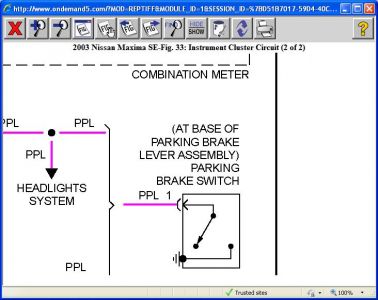 CARADIODOC
Hi saturntech9. Sure ruins a guy's day when you try to help someone and they are rude in return. Fortunately most people understand it takes a two-way conversation, often over a period of a few days, to find the solution.

I've never heard of this being called a "power" wire for the parking brake. The incorrect terminology would throw anyone off course. Permanently grounding that wire will leave the light on the dash turned on all the time the ignition switch is turned on. If the light is shared with the low fluid level switch, (if the car uses one), and the pressure-differential switch, he will defeat those circuits and never know if a problem develops. Insurance investigators just love to find these kinds of do-it-yourself modifications even if it wasn't a contributing factor to a fire or to a crash that was the other guy's fault. It leaves a jury wondering what other things the owner might have screwed up. No professional would risk his job and reputation by permanently grounding that wire and no shop owner would condone such practices. To add to the confusion, while you cared enough to answer, Matt obviously didn't care enough to proof read his first post or to clarify the question in a follow-up post. To quote:

"The only problem is I know know with color it is. So my question is what is the power wire to the parking break?"

His question is, "what is the power wire", and you gave him an answer to what he asked, not what he wanted to know, and for that he was too lazy to clarify his request as most people would do. To add to the humor of the question, there's only one wire to the switch. Who cares what its color is? It's pretty hard to get the wrong one when there's just one. That suggests he doesn't understand this simple circuit or what the instructions to his new radio are asking him to do. People like that are really what this site is for but doesn't it kind of kill your enthusiasm to research answers when you are told off like Matt did? We sure don't do it for the money. I've had six major computer crashes in the first six months of this year involving four computers and four new hard drives. The donations don't even come close to my expenses and then to be chastised for not being psychic and providing the correct answer when we don't get the full or correct information. Maybe they're just looking for someone else to blame. That seems to be the name of the game today.

Sorry to butt into your conversation but it seemed to be kind of one-sided. I've read many of your other replies and noticed all the other visitors asked well-worded questions and sent their thanks afterward. THAT'S why we spend hours per day doing this. If Matt would behave in a civilized manner, understand how much time we spend with our noses in service manuals on his behalf, and show the least little bit of respect and appreciation, he will get much more of the same in return. Instead, why risk this kind of treatment from an ungrateful person? I won't even bother to read his future posts for fear I'll get told off if I don't provide the correct answer in my first reply. There are too many appreciative people here who will get my attention.

How Do I Fix My Interior Lights?

I Have Replaced Bulbs And Fuses For My Map Light And Dome Light, But They Still Don't Work.
Asked by gborocb ·
2 ANSWERS
1999
NISSAN MAXIMA

Bose Stereo Cracking And Shorts Out

When The Stereo Is On, There Is Sometimes A Loud High Pitch Squeal That Comes Out Through The Speakers. I Am Sure It Is A Short Of Some...
Asked by Billy Gideon ·
1 ANSWER
3 IMAGES
1995
NISSAN MAXIMA