First my car started wobbling and making noises. The mechanic told me the front CV joints were broken and needed to be replaced ($1000).

2 weeks later my rear tier burst. Apparently both rear tires had worn out and needed to be replaced (Yes you guessed it right, my first car)

2 weeks after that my car stalled on the road. Had it towed and was told the Water Pump was gone.
Replaced the water pump & the "belts". ($700)

About 2 weeks later the car starts to make a loud squealing noise when I turn the steering wheel all the way to left or right. So I took it back and the mech told me it was a "loose belt" and apparently new belts do that. So he "tightened" it and told me I was good to go.

Now the problem has become intermittent. It starts to make that funny squealing noise every once in a while but then goes away.

I am already $2000 into this and each time the mech tells me the same thing. The car is in good condition and there is nothing to worry about. I am not so sure any more.

Please please help.
SPONSORED LINKS
Do you
have the same problem?
Yes
No

CARADIODOC
Hi Hitendrababaria. Welcome to the forum. What kind of help would you like, or what is the question? None of the things you listed are unusual although the costs of the repairs seem kind of high without knowing any additional details. I can suggest that these kinds of repair bills are VERY common about every six months with GM front-wheel-drive cars and owners seem to accept that. All brands of cars are insanely complicated with unnecessary computers and other electronics and the result is frequent breakdowns and expensive repair bills. That's why most mechanics drive older cars. Imports such as yours tend to break down less frequently than domestic models, but when they do, parts and labor are more expensive than for typical Chryslers and Fords.

The only advice I can offer is to get a second opinion before committing to the next expensive repair.

HITENDRABABARIA
Hi
The problem I needed help with was that I still get the whining noise form the car when I turn the steering wheel all the way to left or right. Only now the noise is intermittent. So sometimes I get it sometimes I do not.

But I still get the sound at least a couple of times a day (expecially when getting the car out of parking).

* Given the list of the items they supposedly fixed for me, is the problem related to the work they did or something new?
* If I take the car back to them what do I ask them to do?
* Is this something I have to be worried about?

I would really appreciate any guidence on the topic.
Was this
answer
helpful?
Yes
No

CARADIODOC
First we need to determine if it's really a belt squeal. If you can catch it while it's making the noise, or better yet, if you can make it do it while you have a helper handy, sprinkle a little water on the belts while the engine is running. If the belts are indeed the problem, usually the noise will stop for a few seconds or it will get louder. The point is the sound will change.

If you have the older style V-belt, it is very common for them to appear to stretch after the first few hours of use. They don't really stretch. The sides that grip the pulleys wear down a little so they sit deeper in the grooves of the pulleys. That causes them to become loose and need to be readjusted once or twice. The newer type of multi-ribbed flat serpentine belts don't do that. Most cars that use that type of belt have spring-loaded automatic tensioners to keep the belt tight. The pivot bolts can become rusted and make the spring-loaded arm stick so the belt will not be held tight. With that style, you can tug on the belt, (engine off, of course), and watch the tensioner pulley move back and forth. Sometimes you can see the arm stick when you release the belt. With either type of belt, if you tug on it between two pulleys, it should only flex about a half inch either way. More than that and it is probably loose.

A power steering whine is much different than a belt squeal and will often occur when the steering reaches full left or right or when the pump has to work the hardest which is at low speeds and when standing still. That noise is the pressure relief valve in the power steering pump hissing and is normal but a similar sound will occur if there is air in the system. Air might have gotten in if they had to disconnect one of the power steering hoses while doing other repairs, especially the water pump. Air can take a while to work its way out. The best way to hurry up the process is by turning the steering wheel from full left to full right a few times when the engine and power steering fluid are warmed up.

A slipping clutch on an air conditioning compressor can cause a horrendous squeal too. The compressor runs in the defrost mode to remove humidity from the air before it is blown onto the cold windshield where it would condense. If the squeal stops when you switch the heater to floor or vent mode, check the AC compressor and its belt.

Caradiodoc
Was this
answer
helpful?
Yes
No
+1

My 1999 Nissan Altima Makes This Very Annoying Whining And Squealing Noise. The Worst Part About It, Is That It Goes Away For Awhile And...
Asked by kapricho31 ·
5 ANSWERS
1999
NISSAN ALTIMA

When The Engine Is Warmed Up, A Whistling Noise Appears Which I Can Hear Near The Alternator Area. I Already Confirmed Belts And Pulleys...
Asked by eliseov69 ·
4 ANSWERS
2000
NISSAN ALTIMA

My Car Makes This Loud Whistling Noise. The Sound Comes From The Rear. When I Step On The Breaks It Stops. It Does Not Matter What Speed -...
Asked by Alex Martin ·
1 ANSWER
2000
NISSAN ALTIMA 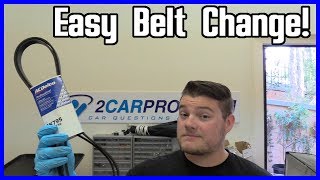