in Sept 2008 I replaced my MAF. Ever since then I noticed that my cars steering wheel vibrates when I am stopped at a red light (it begins a few seconds after the car is stopped).

Also, when I am stopped and the steering wheel is vibrating, if I put the car in Park, the vibration stops?

1. Any suggestions on what could be the cause and trouble shooting ideas or tests that could be done?

2. Is there a diagnostic test to run to see if the idle or timing is off?

3. Why would the vibration stop when I put the car in Park?

Thank you.
SPONSORED LINKS
Do you
have the same problem?
Yes
No

ZACKMAN
[quote]
1. any suggestions on what could be the cause and trouble shooting ideas or tests that could be done??

2. Is there a diagnostic test to run to see if the idle or timing is off??

3. Why would the vibration stop when I put the car in Park?? [quote] 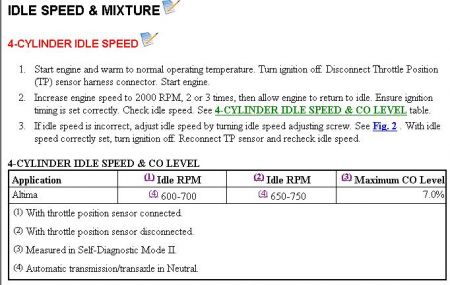 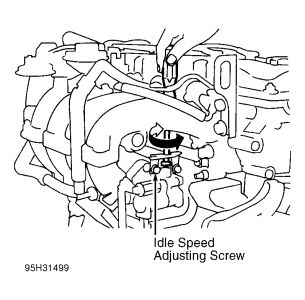 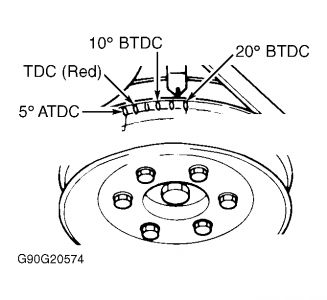 3. Because your engine automatically adjust its idle speed at Park or Neutral higher. You just need to adjust to idle time (at "Drive") and try to get as close to 700 rpm as you can.
SPONSORED LINKS
Was this
answer
helpful?
Yes
No

thank you for the detailed answer. Your assistance and website provides an invaluable service!

Today, I went and found the mechanic who replaced all 4 of the mts in 2003. He showed me where the 4th mt is (the upper mt on the passenger side) and said there is a slight crack in the middle of it. He also said the car engine, steering wheel, and hood vibrates too much and that I should replace this mt and the other lower mt located near the driver/passenger (this mt broke and was replaced in 9/07). If you did not know, Nissan's have a very bad history/reputation for mts wearing/breaking frequently - especially this version (which is the 1st version) of the Altima. I usually have to replace them every 2 years and was lucky that I only had to replace that one mt in 9/07 since 2003.

The upper mt on the driver side and lower mt near the radiator were replaced on Monday, 1/26/09.

Before I read your reply, this mechanic aslo said the RPM is just where it needs to be - as you stated in your reply.

If that does not fix it, I will shoot you another question.

ZACKMAN
Yes, let us know.
Was this
answer
helpful?
Yes
No

I replaced the other two motor mounts today and it fixed the vibration problem.

Thank you again for your assistance and service!
Was this
answer
helpful?
Yes
No

ZACKMAN
Glad everything worked out well for you.
SPONSORED LINKS
Was this
answer
helpful?
Yes
No

New 2010 Altima Steering Wheel Vibration, Not Tires/wheels, Vibration Increases With Speed Above 65, And More On Flat New Road, Than On...
Asked by mikebeardirienzo ·
1 ANSWER
2010
NISSAN ALTIMA

I Bought My Car Brand New About 3.5 Years Ago And Put About 1000 Miles On My Car During The Week With Commuting Between Work, Home And...
Asked by safeshadows ·
1 ANSWER
2005
NISSAN ALTIMA

I Bought My Car In June-21-07, From The First Day I Bought There Was Body N Steering Wheel Vibration, I Went Back To The Company They Told...
Asked by gullu1 ·
1 ANSWER
2007
NISSAN ALTIMA
VIEW MORE