RAMPAIGEOUS
The Harmonic Balancer on my 95 Isuzu Rodeo broke and now the belt is not working. The truck still starts up and drives but the A/C stopped working. Is it okay to drive the truck or will I damge the engine? What funtions does the Harmonic Balancer operate on the vehicle?
SPONSORED LINKS
Do you
have the same problem?
Yes
No

This is a critical component and should be replaced, see text for an explanation as to the function of the harmonic balancer.

A harmonic balancer (also called crank pulley damper, crankshaft damper, torsional damper, or vibration damper) is a device connected to the crankshaft of an engine to reduce torsional vibration.

Over time, the energy dissipating (rubber/clutch/fluid) element can deteriorate from age, heat, cold, or exposure to oil or chemicals. Unless rebuilt or replaced, this can cause the crankshaft to develop cracks, resulting in crankshaft failure.
SPONSORED LINKS
Was this
answer
helpful?
Yes
No

Can I Drive With A Cracked Flywheel, Will That Damage My Motor
Asked by countrygirlsan ·
1 ANSWER
1995
ISUZU RODEO

When I Go Up A Hill It Won't Kick In. The Car Won't Go Pass 3000 Rpm Until A Few Seconds Later Even When The Gas Petal Is Pressed All The...
Asked by Dlyles ·
1 ANSWER
1995
ISUZU RODEO

As We Are Putting The New Fuel Pump In We Realized The New Wire Connect Does Not Match The Old. We Just Need To Know Where To Reconnect The...
Asked by KDrewBella ·
12 ANSWERS
6 IMAGES
1999
ISUZU RODEO
VIEW MORE 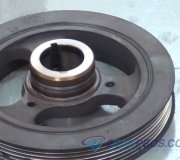 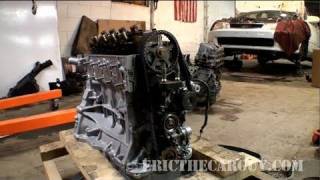