I have noticed twice today that, after starting, the engine will sputter for a few seconds and then die. When I try again the second time it is OK. So far, this problem only occurs after the car has not been in use for several hours. I have no problem as I drive.

I should also note that a few days ago, I experienced that after starting, the car will not accelerate for a few seconds after stepping on the gas pedal for the first time. After it "kicks in", there are no further problems. This also occurred only after the car has not been in use for several hours.

I took the car to my dealer and they scanned for any codes but found nothing. They checked the induction system and found it clogged up. They cleaned it up and also added a fuel injector cleaner. Things were fine for a few days until today's problem.

My last tune-up was at 117K where they replaced the platinum plugs and the wires. They also replaced the serpentine belts. My fuel filter was replaced at roughly 75K. When I took the car to the dealer a few days ago, I asked if the fuel filter needed to be replaced and was surprised to be told that since it was located in the gas tank, fuel filters are generally not replaced!

Any help would be greatly appreciated as I hope to reach 250K with the Elantra. Thank you.

P.S. Forgive me for this stupid question since I am not a mechanic, but are timing belts and serpentine belts totally different things? Also, what else should I look out for with such high mileage on my car? I recently had to replace all four struts, the intake manifold gasket and the valve cover gasket.
SPONSORED LINKS
Do you
have the same problem?
Yes
No

SERVICE WRITER
See if the technical service bullitin applies to you: 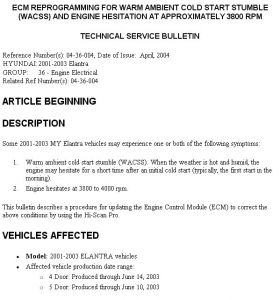 IF the car falls into this, then a reprogramming may take care of it.

The serpentine belt is on the outside of the engine that runs your accessories. 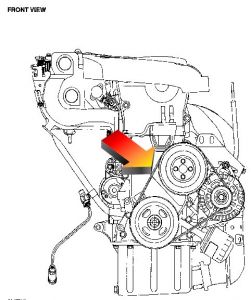 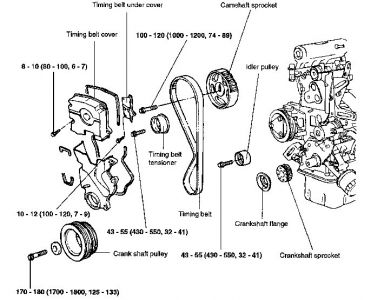 The timing belt should be replaced every 60,000 miles. If it breaks, good chance it will cause serious damage to the engine pistons, valves or cylinder head as the engine is what is called an interference engine.

I would recommend changing the coolant every 60,000 as well as the transmission fluid as least as often.
SPONSORED LINKS
Was this
answer
helpful?
Yes
No

2002 Hyundai Elantra Car Will Not Start

2002 Hyundai Elantra I Just Moved From Florida To Ohio. I Have Been Really Good About Starting My Car Every Day, Until The Other...
Asked by mmonces ·
1 ANSWER
2002
HYUNDAI ELANTRA

GUIDE
How to fix an engine not starting (running)
Observing lights and sounds when the engine is not starting is essential, these steps can give you a direction to proceed which are listed in order of difficulty.

You Can Try It 15 20 Times, Then Finally It Will. I Replaced The Starter Relay, That Wasnt It. I Thought It Might Be The Neutral Safety...
Asked by Jareth58 ·
2 ANSWERS
2002
HYUNDAI ELANTRA

Car Over Heated. I Changed Radiator, Thermostat, Headgasket, And Had Head Sent To Machine Shop. I Made Sure The Timing Marks Were Right And...
Asked by dsantisanti ·
1 ANSWER
2002
HYUNDAI ELANTRA

My Car Is Not Starting?

Oil Leaked Into Srark Plug Chamber 3 And The Car Would Not Start?
Asked by Wade 2011 ·
1 ANSWER
2002
HYUNDAI ELANTRA

Replaced Brakes Then Brakes Started To Drag, Then They Would Not Release Disconnected The Booster Brakes Release. Is The Booster Bad Or Is...
Asked by Ray Hunt ·
1 ANSWER
2002
HYUNDAI ELANTRA
VIEW MORE