CORY DORION
Heater quit working not blowing anything what could it be it worked just the other day but the hi/lo switch only worked on high and now nothing
Do you
have the same problem?
Yes
No

STEVE W.
Either the blower motor, speed switch or the blower resistor pack has failed.
What happens is the motor starts to age, the bearings start to wear and the brushes wear and it takes more current to spin the fan. The resistor pack can only handle just so much current flow and it finally fails, but high speed bypasses the resistor pack through the speed selector and feeds direct 12 volt power to the fan, it will run on high until one or the other fails or blows the fuse. Check out this guide

We'll start with the fuses, In the engine compartment fuse panel there is the main blower fuse (40A), in the interior fuse panel check fuse 6 (7.5A)
Next step if those are OK. Locate the blower relay in the relay box under the hood. Remove it. Turn the heater to any position except off and the blower motor to low, Take a test light and connect one end to ground and test the 4 contacts for the relay. Two of them should light the light (one is the fans power feed the other is the relays power note which two light up).
Next connect the test light to battery positive and check the other two contacts, Both should light the light but I suspect only one will. The one that does is the relays control wire. The other feeds power to the blower motor. If you have another relay (should have a few that are the same in the box) swap it with another one. See if the blower comes on high (it may but I doubt it will) If it does you need a new relay.

Next to get you the rest of the blower speeds you will probably need to replace the resistor block. The resistor pack is in the heater box to the left of the blower fan. Remove the connector and the two screws to remove it. Check the connector for melting or damage and the resistor block. Connect a jumper wire from the terminal that had the Red with orange striped wire to a good ground. Take the test light, connect it to battery positive and use the prob to check the other three terminals on the resistor. If it's good the light should at least light up on each terminal.

The blower fan is in the heater plenum on the passenger side, Remove the connector and the tube and three screws and it comes out. To test it you connect one side to ground (the side that had the orange wire with black stripe), the other (pink with white stripe) to 12V and it should come on. If you have a way to measure the current it is drawing you could check it, anything over about 30 amps would be bad (usually a good blower will take around 20 amps on high)

If you have done all these and all the parts test good, it's time to check the blower motor switch. This can be done from the resistor pack connector. Connect the test light to battery positive, If the switch is OK the light will come on with the switch in every position except low. Turn the switch to each position and probe the connector, one terminal should light at each speed.
If they all check out the switch is OK. If not then you replace the switch. That requires the radio trim to be removed, then the radio and the heat/AC panel, then replace the switch.
SPONSORED LINKS
Was this
answer
helpful?
Yes
No
+1

Problems With The Fan Not Working

I Have Just Started To Experience Problems With The Fan Not Working. It Started To Work On And Off For A While I Then Replaced The Blower...
Asked by averagejoe ·
1 ANSWER
FORD RANGER

My Fan Speed Control Only Works On High Speed. I Assume It Is The Fan Control Switch.
Asked by RdTecBiker ·
3 ANSWERS
1997
FORD RANGER

Heater Fan Works On High Speed Only. Replaced The Resistor And Checked Fuses Still Not Working. Is There A Relay And Where Is It? What About...
Asked by alphonsus ·
1 ANSWER
1 IMAGE
2007
FORD RANGER 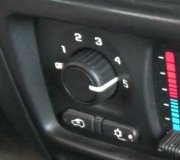 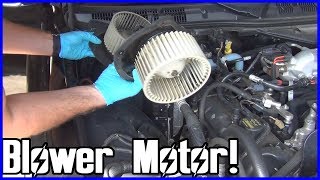