My F-150 runs a few days then won't start. I replaced the fuel pump which was original and whinning loudly. Ran for a few days and stopped. My mechanic then said no ground from the computer to the fuel pump so he put in a rebuilt computer.
Today it wouldn't start again. I tested the power districtuion box under the hood. At the fuel pump fuse there was no power to the fused circuit. The others around it all have 12 v. I tried all harness connections to see they were tight. Any ideas what I should do next? The power block has a nest of wires going into the back. Do you think it is the block, wiring harness or elsewhere?
SPONSORED LINKS
Do you
have the same problem?
Yes
No

RBLOME
Lots of viewers to my issue but no suggestions. I have been thinking about it. If the issue is no power at this breaker slot. Why not use a wire and just tap 12 volts from a neighboring non-crucial slot like the radio slot and feed the cold breaker slot for the fuel pump. I think I will try it. It is sure cheaper than a new wiring harness and power distribution box. It would certainly be a way to test if this makes the vehicle run.
SPONSORED LINKS
Was this
answer
helpful?
Yes
No

RBLOME
Jumping didn't work. I had it towed to a Ford garage. I'll post the solution.
Was this
answer
helpful?
Yes
No

RBLOME
The Ford shop knew what to look for. The 94 F-150 was designed for two fuel tanks. I had just one. There is a wiring harness under the dash with a bypass of some sort plugged in if there is no switch for two tanks. The end of the plug had shorted and fused. Why it was intermittent I can't explain.
But this solved it. We were all looking under the hood and around the fuel tank for the problem when it was deep under the dash board. Now we know. I hope someone else with this issue finds this post.
Was this
answer
helpful?
Yes
No
+1

Yes, My Truck Isnt Getting Fuel Pickup. You Dont Hear The Fuel Pump Start When Ever You Turn The Ignition Key Over. We Hav Check The Fuses...
Asked by Justin6636 ·
3 ANSWERS
1994
FORD F-150 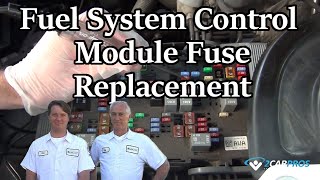 My Fuel Pump Feed Fuse Blows After Starting My Truck. If I Have The Tank Selector Swith Set To The Rear Tank And Turn The Key To The Run...
Asked by padre ·
1 ANSWER
1995
FORD F-150

I Driving And My Truck Just Cut Out. It Cranks No...

I Driving And My Truck Just Cut Out. It Cranks No Spark No Fuel Pressure, Pump Doesnt Prime.I Dropped The Tank Thinking It Was The Pump...
Asked by Anonymous ·
1 ANSWER
1 IMAGE
1997
FORD F-150

No Power To The Injectors And Fuel Pump

My Fuel Pump And Injectors Are Not Getting Power. I Checked All Of The Fuses And They Are All Good. Also, The Check Engine Light Is Not...
Asked by Jed Hall ·
3 ANSWERS
1 IMAGE
1999
FORD F-150
VIEW MORE

How to fix an engine not starting (running)