Wiring for the fuel sending unit

I have a 5.8L with a rear mount aft fuel tank. I dropped the tank to replace the leaf spring hangers. The plug on the sending unit just crumbled apart as the tank was lowered. Now I am not sure which wire goes on which post of the sending unit, and will the fuel pump work with out that plug just by snapping the end of the wires to the posts?

These are the sire colors:
Two wires are fatter than the other two

The two fat wires= orange and the other is black (or dark brown) with a white stripe.

The two thinner wires= black and the other is yellow with green stripe.
SPONSORED LINKS
Do you
have the same problem?
Yes
No

Here are the schematics:

The thicker wires are for the fuel pump and they would work if you plug them in without the connector but ensure connections are tight as the fuel pump draws a rather high current and would heat up if connection is loose. 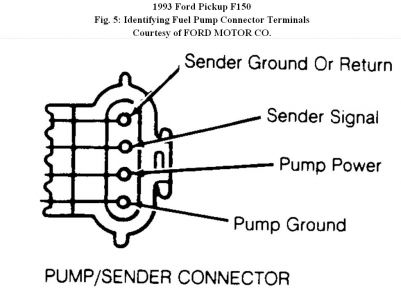 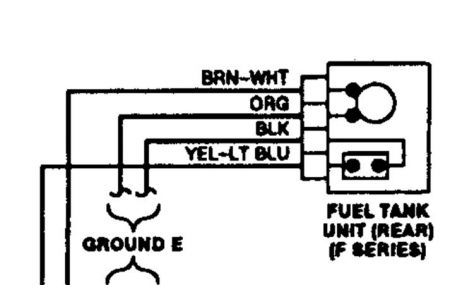 SPONSORED LINKS
Was this
answer
helpful?
Yes
No
+9

My Truck Was Running Well Then All Of A Sudden It Stopped. I Have Done Everthing From Put New Ignition Coil, Rotor Button, And Spark Plugs...
Asked by imoya2004 ·
1 ANSWER
1993
FORD F-150

My Truck Is Starting To Run Terrible. It Sometimes Feels Like It Is In A Bind, Causing Me To Down-shift All The Way To Third On Occasion....
Asked by Biggin4913 ·
1 ANSWER
2000
FORD F-150

So I Went To Change The Fuel Filter On This Truck And It Looks As Though The Last Guy To Change It Used The Wrong Filter As There Is No Gap...
Asked by jessewikdahl ·
24 ANSWERS
1996
FORD F-150
VIEW MORE 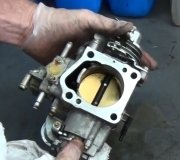