MOOTACKMOM
I have had trouble with my check engine light coming on and off for three years. I have a flex fuel engine but do not use E85. The code always reads flex fuel sensor. But when warm weather gets here, the light goes off. The problem is I have to renew my tag in cold weather and cannot pass the emissions test but can in the summer. Been told that the sensor can get gummed up. Seafoam has helped. I'm confused. Please help.
SPONSORED LINKS
Do you
have the same problem?
Yes
No

I attached a description below for you on the system. The sensor is in the fuel line back at the tank.

There is no cleaning this sensor. If it is reading incorrectly, it must be replaced.

You need a scan tool that can monitor the voltage on the sensor itself.

What is the code that is set?

The fuel composition sensor has a three-wire electrical harness connector. The three wires provide a ground circuit, a power source, and a signal output to the PCM. The power source is vehicle system voltage, (+12 volts), and the ground circuit connects to chassis ground. The signal circuit carries both the ethanol percentage and fuel temperature within the same signal, on the same wire.

The FCS uses a microprocessor inside the sensor to measure the ethanol percentage and fuel temp, and change an output signal accordingly. The electrical characteristic of the FCS signal is a square-wave digital signal. The signal is both variable frequency and variable pulse width. The frequency of the signal indicates the ethanol percentage, and the pulse width indicates the fuel temperature. The PCM provides an internal pull-up to five volts on the signal circuit, and the FCS pulls the 5 volts to ground in pulses. The output frequency is linear to the percentage of ethanol content in the fuel. The normal range of operating frequency is between 50 and 150 Hertz, with 50 Hertz representing 0 percent ethanol, and 150 Hertz representing 100 percent ethanol. The normal pulse width range of the digital pulses is between 1 and 5 milliseconds, with 1 millisecond representing -40 C (-40 F), and 5 milliseconds representing 125 C (257 F).

The microprocessor inside the sensor is capable of a certain amount of self-diagnosis. An output frequency of 170 Hertz indicates either that the fuel is contaminated or contains methanol (it should not), or that an internal sensor electrical fault has been detected. Certain substances dissolved in the fuel can cause the fuel to be contaminated, raising the output frequency to be higher than the actual ethanol percentage should indicate. Examples of these substances include water, sodium chloride (salt), and methanol.

It should be noted that it is likely that the FCS will indicate a slightly lower ethanol percentage than what is advertised at the fueling station. This is not a fault of the sensor. The reason has to do with government requirements for alcohol-based motor fuels. Government regulations require that alcohol intended for use as motor fuel be DENATURED. This means that 100 percent pure ethanol is first denatured with approximately 4 1/2 percent gasoline, before being mixed with anything else. When an ethanol gasoline mixture is advertised as E85, the 85 percent ethanol was denatured before being blended with gasoline, meaning an advertised E85 fuel contains only about 81 percent ethanol. The FCS measures the actual percentage of ethanol in the fuel.
SPONSORED LINKS
Was this
answer
helpful?
Yes
No

Fuel Pump Not Working Why?

I Am Not Getting Power To The Fuel Pump And I Cant Hear It Turn On When I Cycle The Key?
Asked by Baron Mallory ·
14 ANSWERS
18 IMAGES
2003
CHEVROLET TAHOE

Why Do I Smell Gasoline? 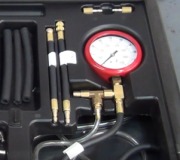