Hi,
This is a bit of a head scratcher.
We have had electrical problems with this car for about 2-3years. First the radio was blown and the drivers side window wouldn"t roll down. Then it cooled down a bit and it started rolling down. Then the drivers side sliding door lock stopped working and the speedometer spun around like crazy only to rest on the wrong side of the zero. All of these were intermitent and at different times.
Last Sunday on our way to church all of a sudden the gas pedal didn't seem to do any good. We sputtered out by the side of the road and oil light came on. Check engine light had been on for a while.
Had it towed to the shop we go to and they said fuel pump.
They took out battery to replace the fuel pump and when they put it back in the security light was on. They tried a different new battery (original was only 4ms old though) and still no use. Called us to bring the other key by to see if that would help.
Then they had it towed to the dealer. The dealer said when it arrived that there was no power to the vehicle. After 1 hr diagnostics said they could not detect main computer, and they needed two more hours. Even then they may not find the probelem. The shop we go to had it towed back to them. They didn't tell us all this till it was all said and done.
The shop said they don't know what to do and basically the dealer has to have it fixed.
What could cause this? Could something have come loose in the towing? I want to ask my dad to come have a look but where to start in the mass of wires and fuses! That could take weeks to figure out.
Also wondering if they could have bumped something while replacing the fuel pump to make it come undone. We live in N. Texas so it is possible there was already a problem from a squirrel or heat and moving things around and towing finished off the job. I searched the internet and your forum and no answer. The repair manager at the dealer said he had never heard of very many electrical problems with the town and country, we have owned two both with lots of problems and plus they are all over the internet.
I know that you may not have an exact answer, I was hoping maybe just some ideas since most people I have spoken to have none. It is still at the shop now so if you have any then I could ask them to check--they are super nice and willing to try anything at this point!
Thanks--sorry so long!
Diana
SPONSORED LINKS
Do you
have the same problem?
Yes
No

SERVICE WRITER
I had heard of similar problem that found wires corroded under power distribution center under hood. If you remove battery you can pivot pdc and access wire harness. Check where harness starts to go into fenderwell. Battery acid can create havoc
should it have reached the harness. And have seen it.

Also Disconnect battery and leave overnight.
After re-connecting is anything different?

My gut feel is a pcm went bad knowing these.

You can get a used one, but need to pull the pcm number from it. It may or may not need reprogramming. We just did one a month back that had a portion of the pcm bad.

I am assume the engine turns over, just doesn't start.
SPONSORED LINKS
Was this
answer
helpful?
Yes
No

DIANAC7
Thank you I will pass on what you said.
Plus I will clarify with them but I think that when they said no power it was my understanding that there was no power at alll to anything in the car as if it didn't have a battery at all but there is a new one in there.
I am not sure though if that is the case how they were able to do the diagnostics at the dealer.

I will get more info, try some things and get back to you.
I will also donate more as appropriate :)
Diana
Was this
answer
helpful?
Yes
No

SERVICE WRITER
The more info the better, for sure.

Hopefully, The harness pans out first.

Lemme know.
Was this
answer
helpful?
Yes
No

DIANAC7
Ok,
Finally got the van home (we have had bad weather here)
When they say no power they literally mean no power. No power locks nothing lights up on the console, nothing as if there is no battery and there is one and hooked up.
My husband is going to look at it today and see if any wires are loose and follow your advice.
Could it be a ground wire to the battery?
I read on some of forums that sometimes that causes the car to have no power.
Anyway thanks for your help I wil let you know what happens
Was this
answer
helpful?
Yes
No

SERVICE WRITER
Sure could be a bad ground. Battery and connections to where they go need to be clean and tight. Battery must be good and charged.
SPONSORED LINKS
Was this
answer
helpful?
Yes
No

DIANAC7
My husband took out battery and housing. Looked at PCM. Said visually everything looks fine. Ground was connected and looked fine.
Do you think that we should try and replace the battery cables and ground? Battery is only 3 mos old from Sears. Incidentally I had to replace it because the old battery wore out in 1 year, but I figured it was due to the fact that the power doors etc drained it.

So would a bad ground cause the security light to come on then no power?
I keep thinking something must have giggled loose since it left the shop with power and light on, then when they had it towed to dealer. No power.
How many wires can there be that could cause absolutly no power when every thing appears hooked up?
My other car crapped out so now we are really up a creek!
It is a VW and same sort of thing is happening--maybe I am jinxed? LOL
Thank you for your help and patience.
Diana
Was this
answer
helpful?
Yes
No

SERVICE WRITER
Okay let's back up a second.

There is no power at all. Turning the headlight switch on will not allow the lights to work for example.

The security light is on solid?
at all times?

IS the battery fully charged?
Use a volt meter (multimeter) to make sure it is.
Set the multi-meter to milliamps, what is the draw on the battery? 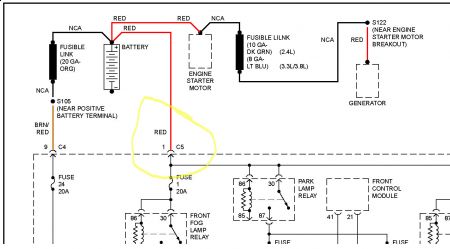 Check for power getting to the Intelligent power module.

In this componenent (ipm) you should check fuse #14, 15A. this is the iod fuse 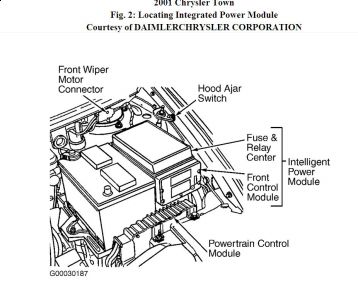 Also start a new post for your VW.
Was this
answer
helpful?
Yes
No

DIANAC7
The shop around the corner has had my van for all this time and he finally brought it back to me. He said it was the pcm. But he couldn't fix it. He said that he was trying to get some guy to reprogram/fix my pcm. I came home the other day to find my van in my driveway. He still hasn't called me.

Anyway, I called the dealer and they said a new pcm would be $700-1000.
But I was wondering if it was possible to just pull one out of a van in a junk yard. Would I have to get it programmed by the dealer? Would it even work at all?
I have read on this site that you can do that but the mechanic at the shop the van was just at said it can't be done. I was willing to even bring him the pcm to install.

Thank you for all of your advice, my husband tried what you said, the reason we took it to the guy around the corner is we know his cousin and he had the equiptment to check all the wires to make sure they weren't shorted inside.

Diana
Was this
answer
helpful?
Yes
No

It was $150 on ebay. It worked like a charm just as they said plug and play! Plus if you send in your core to them(free shipping) then you get a lifetime warranty!

I wish I would have known about them at the begining it would have been worth the $150 to try and see if it was the PCM.
Was this
answer
helpful?
Yes
No

SERVICE WRITER
I guess my gut feel was right. Sorry
I didn't get back to you last month, I just got back online this week.

Glad it worked out.
Was this
answer
helpful?
Yes
No
+1

After Replacing Fuel Pump And Battery Van Cranks But...

Recently Replaced Fuel Pump And Battery. Van Cranks But No Start. It Has Spark. Fuel Pump Is Working. No Fuel At Engine. If It Is Primed It...
Asked by Sjbaze ·
11 ANSWERS
2001
CHRYSLER TOWN AND COUNTRY

GUIDE
Fuel Pump Replacement
When a fuel pump goes out it can do so one of two ways either it can quit and stop working or it can fail intermittently causing the engine to stall or not start.

I'm Trying To Start My Van And Car Will Crank, But...

I'm Trying To Start My Van And Car Will Crank, But Wont Start. I've Changed Spark Plugs, Iacv, Fuel Filter And The Oil. When I Do Try To...
Asked by mjdag4795 ·
4 ANSWERS
2001
CHRYSLER TOWN AND COUNTRY

Initially, Car Was Previously Driving Fine. Made A Turn And The Car Stalled. After Stalling The Car Was Extremely Difficult To Start...
Asked by gonefishin4 ·
5 ANSWERS
2003
CHRYSLER TOWN AND COUNTRY

I Have A 02 Chrysler Town And Country Van And It Just Stops Running When You Drive It About 5 Miles. If You Rase The Hood You Can Hear...
Asked by dlfink ·
1 ANSWER
4 IMAGES
2002
CHRYSLER TOWN AND COUNTRY

My Van Stopped Running. I Came To A Stop And It Stalled The When I Restarted It, It Sputtered And No Power. Then Would Only Turn Over But...
Asked by cptwinki ·
4 ANSWERS
1999
CHRYSLER TOWN AND COUNTRY
VIEW MORE